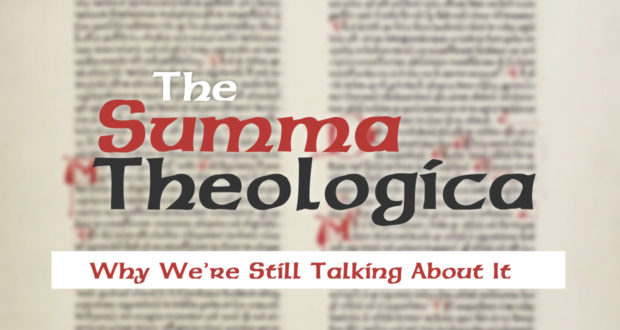 In the late Thirteenth Century, the epoch which historian Warren Carroll has referred to as “The Glory of Christendom,” Saint Thomas Aquinas penned his masterpiece: The Summa Theologica. It would come to be considered one of the greatest intellectual works of the Western Canon, and is commonly cited as one of the most brilliant works of theology in ecclesiastical history.

For the seven hundred years since its writing, popes have had a difficult time speaking of the intellect of St. Thomas without the use of superlatives. For instance, Pope Leo XIII writes: “Among the Scholastic Doctors, the chief and master of all towers Thomas Aquinas, who, as Cajetan observes, because ‘he most venerated the ancient doctors of the Church, in a certain way seems to have inherited the intellect of all.’”

“For it has come to light that there were not lacking among the leaders of heretical sects some who openly declared that, if the teaching of Thomas Aquinas were only taken away, they could easily battle with all Catholic teachers, gain the victory, and abolish the Church. A vain hope, indeed, but no vain testimony.”

Many are familiar with the Summa Theologica, but there is a lesser-known fact about Thomas’ masterpiece: it was never finished.

In the year 1273, after nearly completing the Summa, St. Thomas Aquinas was praying in church, and his body was levitated in an ecstacy. While Thomas was in that state, Jesus spoke to Him from a crucifix on the altar. Jesus said: “Thou hast written well of me, Thomas; what reward wilt thou have?”

Thomas replied, “None other than Thyself, Lord.”

In that same year, his biographers note that St. Thomas experienced something so profound and life-changing during Mass that Thomas was unable to continue his work. His friend, Reginald of Piperno, asked him about writing, and Thomas confided in his friend: “I cannot do any more. Everything I have written seems to me as straw in comparison with what I have seen.”

Although it is often guessed that St. Thomas experienced some type of vision of Heaven, we are not sure exactly what St. Thomas saw. But whatever it was, it caused him to think of one of the greatest works in Christendom as nothing more than straw in comparison.

St. Thomas’ comments take on a humble poignancy when contrasted with the attitude of many Western intellectuals today. Whereas St. Thomas realized that his writings meant little in comparison to an encounter with God Himself, modern intellectuals, drawing farther away from God, develop a sense of narcissism toward their own works. With the embrace of modernism— “the synthesis of all heresies” —our society has anointed atheists such as Nietzsche and Jean-Paul Sartre as the most brilliant of thinkers.

The denial of God has almost become a rite of passage for acceptance in academic society. Modernists, in their conceit, seem to think that they have proven that God does not exist.

But that is not the final word. In his Summa, St. Thomas Aquinas gave us a great weapon to fight against the heresy of modernism, and for the Faith. As Catholic parents, we need to teach the Summa to our children—to impart the brilliance of the Angelic Doctor to the next generation, and every generation that follows.

It will be the straw that breaks the modernist camel’s back.