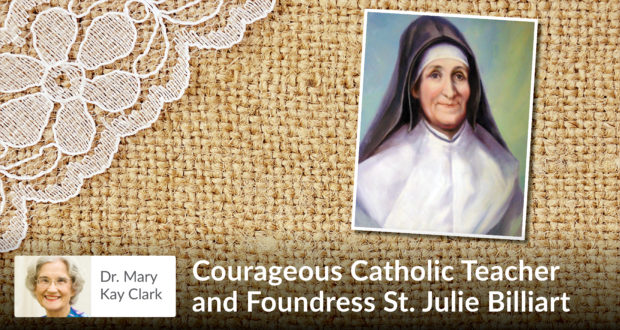 Julie Billiart, was persecuted after the French Revolution but nothing would stop her from teaching Catholic children about Jesus and the Catholic Faith.

Julie Billiart lived on a farm in France as a child in the 1750s and loved learning about Jesus and the Catholic Faith from her mother.

In her religion classes at a Catholic school, she listened with great interest to the stories about Jesus and the saints. She especially loved stories about His mother Mary, Our Lady (in French, Notre Dame).

When she was about ten years old, Julie gathered a little group of classmates to come to her family barn after school, and with her mother’s help, she led the group in conversations about religious topics that had been brought up in their classroom. Her excitement about learning more about Jesus and Mary and understanding their catechism lessons better caused animated discussions among the children.

Julie’s simple calm life on the farm suddenly changed when she was a young woman. Julie’s father owned a little shop in town, where Julie and her siblings helped out when they were older. One day, when Julie was working in the shop, several criminals came into the shop, viciously attacked her father, and murdered him in front of her eyes.

Although Julie was not attacked, she suffered such severe emotional trauma witnessing her father’s suffering and death that she became paralyzed. Julie remained paralyzed for the next forty years, constantly in a wheelchair or in a bed.

While Julie could no longer work on the farm or in a shop, she continued, in spite of her physical and mental sufferings, to teach the young people around her about the Catholic Faith. Since Julie could not travel without help, she conducted her classes at her home or in the homes of friends.

Parents and their children would visit Julie and learn interesting stories about the saints and the teachings of the Catholic Church. As the years went by, the local Catholics, as well as the priests and nuns, saw Julie as a holy woman in their midst and looked to her for spiritual guidance.

Teaching in Danger and Secrecy

In 1789, life in France changed for all French citizens. In Dicken’s story, A Tale of Two Cities, we can understand the sufferings of the French people during those horrible days of the French Revolution and the overthrow of the French Government. In 1789, the Revolutionary leaders burned down Catholic schools, convents, seminaries, and churches. The soldiers executed priests and nuns.

Young Julie secretly continued to help those who wanted to learn more about their Catholic Faith. Julie, her friends, and her students lived in constant danger. They would move her secretly and cautiously from one home to another.

Eventually, Julie and her friends began to hide priests, nuns, brothers, and seminarians.

Farm workers and friends worked with “Julie the Invalid” to smuggle out of the country those who needed to escape from the danger from Revolutionary soldiers.

Through it all, despite her sufferings, Julie continued to instruct the children from her wheelchair or her bed as she was moved from home to home, teaching classes for the children who wanted to learn more about the love of Jesus. Julie was inspired by Jesus, who taught not only in the synagogues but also in the open fields, by the seashore, from open boats, in private homes.

Once, when she was teaching a secret religion class, friends ran to her house to say the anti-Catholic soldiers were on their way to capture Julie. Her friends quickly lifted her and hid her under a stack of hay in a wagon, and in a wild race on a dusty country road, they managed to escape with Julie to a safer location.

When Julie was around 50 years old, she reported having a vision of nuns in a religious habit, praying before Jesus on Calvary. In the vision she heard a Voice, which she believed was from Heaven. The Heavenly Voice said,

“Behold these spiritual daughters whom I give you in an institute marked by the Cross.”

Julie realized she was being called to start a congregation of teaching nuns. A wealthy lady and friend helped Julie Billiart to establish the famous and well-loved teaching congregation of the Sisters of Notre Dame in 1803. The Notre Dame schools quickly spread throughout Europe and America. A year after her vision, God cured Julie of her paralysis after 22 years; she was able to walk once again.

St. Julie Billiart provides a wonderful example to inspire Catholic home schooling moms. Though she spent a number of years unable to walk, she let nothing stop her dedication to teaching Catholic children about Jesus and the Catholic Faith.