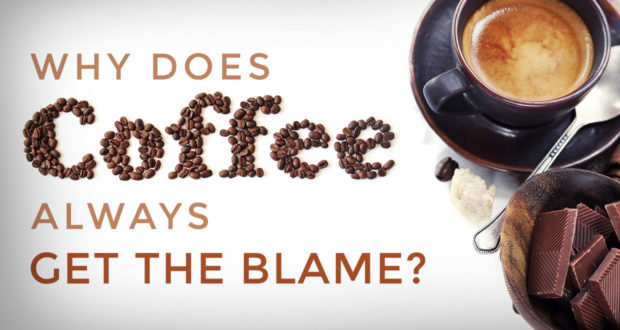 Why Does Coffee Always Get the Blame?

Has anyone else noticed that coffee has become the financial “fall guy” lately? We live in an age of bailouts, zombie banks, troubled assets, and more troubled liabilities, yet coffee is often pointed to as the real financial problem. Here’s what I mean.

Have you been in a conversation expressing your frustration that you can’t afford something, and someone chimes in with a tidbit of advice like this:

“Well, if you’d just stop drinking your vanilla lattes every morning, then maybe you could afford that new house/used car/vacation to Mongolia.”

As if the only thing that stood between the good life and me were vanilla lattes. Did I miss something, or is a demitasse a little more expensive for others than it is for me? We’re talking about a few dollars a day, right?

Wouldn’t the college tuitions, orthodontics, violins, ballet classes, and homeschooling books overturn my financial applecart long before the espresso? Is frothy coffee really going to be the thing that makes or breaks me?

I can see it now…

Sometime in the future, a friend comes over to my house, looks around and says: “John, how did you and Lisa afford such a beautiful house?”

“Well, Scott, I didn’t think we could do it, but we gave up lattes for twelve-hundred-and-seventy-five-years, and we were able to make a down payment. Of course, there has been a downside: we’ve been dozing off the entire time because of the lack of caffeine.”

Especially if it’s in the middle of a speech.

Especially if you are the speaker.

(If you’ve been reading my column for a while now and you know my backstory, you might be asking why I don’t get enough sleep at night; after all, my youngest child is almost five years old. Fair question. Here’s the answer: when your children are little, their crying keeps you awake. When they become teenagers, your crying keeps you awake. And lest you think otherwise, for the record, I have nine of the greatest and most wonderful children in the world. But, however your children are doing in life, worrying about them—along with the concomitant daytime narcolepsy—is an understandable reaction. Hence, the need for coffee.)

Implicit in the anti-coffee comments like the one above is the idea that coffee is a needless luxury. Not only do I disagree with that as an economist (coffee clearly falls under “need” as opposed to “want”), I disagree from the perspective of theology. Some time ago, I remember Lisa telling me about discalced orders who start their day with a bowl of java. In other words, there are religious orders of people who don’t have shoes—but do have coffee.

There is a lot we can learn from our religious brothers and sisters: namely, to paraphrase St. Teresa of Avila, there is a time for fasting and a time for froth.

Or, to put it another way: live a little.