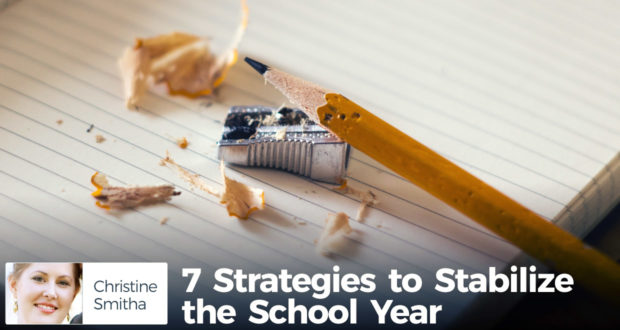 Schedules and plans are all very well and good, but if you’re like most of the rest of us, your school year goes off the rails at some point.

It’s almost inevitable that something will happen, whether it’s relatively minor such as a series of seasonal illnesses, or more significant, such as a new birth in the family.

Either way, you may find yourself asking, “How can I get back to the plan we had? How do we get caught up?”

Over the years, we’ve heard a lot of good advice, and combining that with wisdom from the counselors and Dr. Clark, we offer it to you here, in the hope that if you’re currently looking for a way to get back on track, you’ll find it in these pages.

A lot of times, it’s the little things that knock us off balance. That’s because they’re small enough we don’t notice them at first. Over time, however, they encroach more and more, driving a wedge between us and the important things we need to be doing.

Sometimes, that’s our own fault, such as when we can’t put down the smart phones because we’re too tuned in to the latest texts, tweets, and instagrams. Other times, it’s not our fault, as when the phone won’t stop ringing with calls from marketers, politicians, and scammers, as happened to Seton mom, Sandy.

If you’re noticing that you’re suddenly taking twice as long to get through the school day, take a step back and see what might be consuming more than its fair share of your time. This goes for the kids too, and nine times out of ten, it’s electronics.

Silence cell phones during morning hours and stash them away from the school zone. Move toys, comic books, and other recreational items away from work spaces. Ask family not to call before lunch, and register your phone number with the National Do Not Call List.

Turn off televisions and radios, and save the internet for afternoons or evenings.

Sometimes we get bogged down because we’re trying to accomplish too much at once. Brains get saturated, energy lags, personalities generate friction, and before you know it, productivity has been cut by significant proportions. If this happens, it may be worth your while to restructure your school week.

Instead of doing all six to nine subjects (depending on grade level) every single day, do Math, English/Reading, and Religion every day, but save Science, History, Geography, and Art for two or three times a week.

Within a particular course or subject, you can cut certain elements, as well. As our counselors so often tell families, “Focus on essentials, and don’t worry about the rest!” If it’s a major assignment, finish it; if it’s a daily activity, let it go.

At times it may be necessary to let an entire course go for a period of time, perhaps even for a semester or even a year. With this method, you relieve the student of the most troubling course during your regular school year, which allows the student to complete the remaining courses much more quickly with a relatively stress-free mindset.

Then after everything else has been accomplished, the “problem course” can be begun again, with undivided attention and a sense of freedom to take as much time as needed. As homeschool mom Nancy told us, “Sometimes when something isn’t working, it’s better to stop and start all over again, rather than just keep pushing.”

Removing those stumbling blocks for a time may be just what’s needed to get school back on track.

Inevitably, there will come a point when something happens that just couldn’t have been foreseen, and for which we just can’t be prepared, whether it’s a death in the family, illness, or accidents, or an unexpected job promotion with subsequent move.

In such situations, it’s not unusual for homeschooling to take a back seat for a few weeks, perhaps even a month or two. It can be demoralizing to face the seeming mountain of work that awaits you when the family is finally able to return to fulltime schooling.

Chip away at the work. Do school on Saturday mornings for a month. Add an extra half hour to hour of class time either at the beginning or the end of your normal school day. Meagan had her children do one extra hour a day five days a week for a few weeks after a move, and told us that it wasn’t very long before they were caught up.

Do one class during lunch every day, something such as spelling or geography, in which everyone can participate.

By the end of the first week, you’ll have caught up by two or three days, and within a month or two, you’ll be fully caught up, using this incremental approach to accomplishment.

If adding in extra school time isn’t suited to your family dynamic, try the alternative tactic, wherein you pick just one course or type of assignment, and do nothing but that for a week or two weeks at a time. Seton mom Michelle says when her kids get behind on book analyses, they “take an entire week off just to focus on getting the books read and writing the [book] reviews.”

Instead of allowing that assignment to drag out for an entire quarter, Michelle makes sure they catch back up by stopping everything else. When you hone in on just one area for a few days before moving on to the next, not only can you get it done more efficiently, it’s the Seton experience that you frequently end up getting ahead in everything.

You may have gotten this far in the article and be thinking to yourself that it’s just not possible, not in your life, not in your circumstances. Perhaps it’s time to think about asking for help, which is something most of us don’t like to do, but which we should all do more frequently, nonetheless. Asking for help produces the double blessing of lightening your burden while offering someone else the chance to practice charity.

Sarah tells us that their family has nearly always been in survival mode, what with eight children under ten, a ninth currently on the way, and the fifth requiring special needs care. She finally reached out to her family this past year, and her father started coming to tutor the children twice a week. It made a difference.

If aunts and uncles or grandparents are not comfortable teaching your children, perhaps they might be willing to help with errands and chores such as grocery runs and housework. Recruit friends and family for a Saturday to help you fill your freezer with a month of meals, or to do a top-to-bottom house-cleaning. Many hands make light work.

Even having a young lady from church come once a week to help you with babysitting or tidying can make a big difference in your ability to manage your homeschool.

Finally, trust in the power of prayer and God’s infinite goodness. He can and will help your family when you need it. Rely on the Blessed Mother for her intercession and assistance. Seton mother Terri tells a particularly poignant story of how her daughter was unable to do any school work for a long time after the death of a close friend in an accident.

At a loss, Terri finally began praying a novena to Mary, Undoer of Knots. Within a couple weeks, her daughter was able to function again, and has since successfully completed her school year. With God’s grace, we really can achieve the impossible.

In the long run, as Dr. Clark reminds us, “Staying on track should simply mean not wasting time and doing schoolwork every day.”

After that, “getting behind” is really only a relative term. That’s the beauty of homeschooling. Each student learns at the pace best suited to him or her within the context of the particular family situation.

If you need to take a break or take a longer time, that’s o.k. But if you believe there’s legitimate concern for the state of your homeschool, try one or two of the strategies above, and see if you’re not back on track by the end of the year.