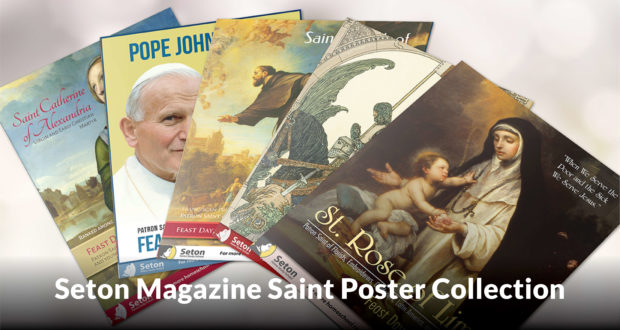 Pin these colorful printable saint posters to the classroom wall or tape to your refrigerator and easily learn more about these wonderful saintly heroes.

Just click to download these beautiful saint posters from the Seton Magazine using the links below. And they’re free! Pin them to your classroom wall or tape them on your refrigerator and see how your children learn about these wonderful saintly heroes.

August 2017 St. Augustine was a Catholic Bishop and Theologian. He is the patron saint of printers and theologians. His feast day is August 28.

September 2017 The patron saint of students and aviators, St. Joseph of Cupertino was a Franciscan Friar and Priest known as the Flying Friar because he would rise from the ground while saying the Mass or praying. His feast day is September 18.

November 2017 St. Catherine of Alexandria converted many learned pagans, soldiers, even members of the royal household to Christianity. In anger, Empire Maxentius had them all executed. Her feast is November 25.

December 2017/January 2018 Among the many customs and traditions to celebrate the Feast of the Epiphany are finding the hidden bean in King’s bread and receiving gifts from La Befana. The feast is celebrated on January 6.

February 2018 St. Valentine There are many legends on the origin of St. Valentine’s Day, but we know that he was a man of great faith and is the patron of love, devotion, and romance. His feast day is February 14.

March 2018 St. Patrick was born in Roman Britain. At age 16, he was captured by Irish pirates and sold as a slave. He suffered many trials but would go on to convert Ireland.  His feast day is March 17.

April 2018 St. Gianna Beretta Molla, wife, mother, physician; a heroic decision during her complicated pregnancy. “If you must decide between me and the child…Save the baby.” St. Gianna’s feast day is April 28.

May/June 2018 St. Joan of Arc , Maid of Orléans, patron saint of soldiers and France, had a typical life growing up; spinning wool and helping to gather the harvest. But at 13 years old, she began hearing the voices of saints who gave her a mission for her from God; to save France. Against all odds, she succeeded. Her feast day is May 30.

July/August 2018 St. Rose of Lima, was devoted to homeless children, the elderly, and the sick. She fed and cared for them in her home, saying, “When we serve the poor and the sick, we serve Jesus.” Her feast day is August 23.

September/October 2018 It was not easy for St. Teresa of Avila, Doctor of the Church, to discern her vocation but once she did, her influence even within her life was remarkable. Her feast day is October 15.

November/December 2018 St. Francis Xavier, the patron saint of missionaries, sailors, Japan, and the East Indies. With Ignatius of Loyola and companions, he founded the Society of Jesus. His feast day is December 3.

January/February 2019 A dream led St. John Bosco to a life dedicated to teaching, encouraging, and caring for neglected boys using methods that exemplified a loving and merciful God. His feast day is January 31.

March/April 2019 St. George The example of St. George teaches us to have faith that God will give us the courage, strength, and fortitude needed to fight the dragons in our lives. His feast day is April 23.

May/June 2019 St. Rita of Cascia, born Margherita Lotti, was an Augustinian nun known as a peacemaker and patron saint of impossible cases, abused women, and parents. Her feast day is May 22.

July/August 2019 St. Dominic was a dogged defender of the Faith, an enthusiastic promoter of the Rosary, and founder of the Order of Preachers, also known as the Dominicans.

September/October 2019 St. Padre Pio bore the wounds of Christ and he is the patron saint of civil defense volunteers, adolescents, and stress relief. His feast is September 23.

November/December 2019 St. Elizabeth of Hungary is known for her Christian charity, and is the patron saint of bakers, brides, and Catholic charities. Her feast is November 17.

January/February 2020  St. Blaise is well to ask a miracle from St. Blaise, a popular saint during the Middle Ages, one of the 14 Holy Helpers, and a physician known for miraculous cures.

May/June 2020  St. Anthony’s sermons were eloquent, passionate, and knowledgeable and while they were profound, they were simple enough for the average person to understand.

July/August 2020 What we know about St. Veronica and her act of kindness is based on tradition, but still, her veil is considered one of the Church’s most treasured relics.

September/October 2020 It was hearing the deathbed confession of a peasant that inspired Vincent de Paul to begin a lifetime of aid to the disadvantaged and bring souls to Christ.

November/December 2020 Patroness of music and musicians, St. Cecilia is one of only seven women, including the Blessed Virgin Mary, listed in the canon of the Roman Catholic Mass.

January/February 2021 Kidnapped and sold into slavery, St. Josephine Bakhita miraculously was lead to the Canossian Sisters serving others for forty-two years with her ever-present smile.

March/April 2021 In times of trial look to Saint Joseph, his example shows us how to trust in God particularly when the paths of our lives do not turn out as we would wish.

May/June 2021 St. Peter was a simple man, not wealthy or educated yet called by Christ to establish the church on earth. How does that speak to what we are called to do?

July/August 2021 Constantine tasked his mother, Saint Helena to travel the Empire and gather holy objects. It was during these pilgrimages that Helena discovered the True Cross.

November/December 2021 Saint Lucy consecrated herself to God and was true to her promise of purity even through horrible torture. She is one of the seven women mentioned in the Mass.

January/February 2022 Mother Marianne, in the language of truth and love, worked tirelessly for her patients, the poor suffering from leprosy, and even Saint Damien in his last days.

March/April 2022 His symbol the winged lion, Saint Mark, comfort to Paul and founder of Alexandria’s first church was the first to bring the Gospel to Africa.

May/June 2022 Saint Dymphna lives on to comfort the nervous and emotionally challenged and her adoptive Belgium town is the model for innovative health care.

July/August 2022 Saint Maximilian is the patron of journalists, families, prisoners, the pro-life movement, the chemically addicted, and eating disorders.

September/October 2022 Little is known about St. Ursula’s maidens, but a Basilica on the site of her martyrdom and female bones below give credence to the legends.

November/December 2022 St. Juan Diego “Am I not here, I, who am your mother? Listen and understand, my littlest son, let nothing frighten and afflict you or trouble your heart.”