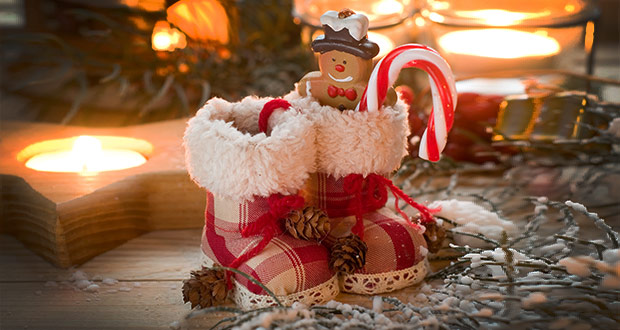 6 Ways to Celebrate the Feast of St. Nicholas

Fr. Jerome Fasano, our local parish priest in Front Royal, Virginia, preaches a sermon every year on the existence of Santa Claus. Of course Santa Claus exists, he says, because Santa Claus is merely a stylized version of St. Nicholas.

Even in modern day pictures of Santa Claus, we can still discern the outline of the early Christian Bishop St. Nicholas of Myra.  Santa Claus wears the fur-lined habit of the bishop and his hat still reminds of us of the bishop’s mitre.

Fr. Fasano tells us not to worry about the rumors of Mrs. Claus—that’s just a case of mistaken identity.  The woman they call Mrs. Claus is really the housekeeper.

In any case, St. Nicholas is one of the most beloved of the Christian saints.  During his life, he was known for gift-giving, especially giving done secretly.

Due to the many miracles attributed to his intercession, he is also called “Nicholas the Wonder-Worker”.  Throughout the world he is revered as the patron saint of many groups, especially children.

The Feast of St. Nicholas, on December 6th, is a major feast day throughout many cultures, especially in northern Europe.  In the United States, St. Nicholas Day has mainly been celebrated in areas with a strong German influence.

But St. Nicholas should be remembered, and his feast day celebrated, by all Christians.

So how to celebrate the day?

Sometimes, instead of simply leaving items, St. Nicholas himself makes an appearance, and asks the children whether they have been good or bad.  One story of the generosity of St. Nicholas speaks of him giving gold coins as a dowry to a poor family.

In honor of this, gold foil covered chocolate coins are often one of the treats given.

CCC of America puts out a nice video called Nicholas: The Boy Who Became Santa Claus.

We can tell our children often that we need to think of others and have compassion for their situations, but seeing it put into action through a story can make it much more real than just talking.

By watching a video about the charity of St. Nicholas, perhaps our children will want to be more like him.

Children love to do hands-on projects, and what could be better than doing St. Nicholas crafts.

There are many stories about St. Nicholas, both about his life and about the miracles which are attributed to his intercession.

The St. Nicholas Center has collected many of these stories here.  You or your children can learn more about Christmas traditions by reading about St. Nicholas.

Why do we hang up stockings in front of the fireplace on Christmas Eve?  Because of St. Nicholas!

St. Nicholas was known for giving to those in dire circumstances.  There is no less need today for those blessed with material goods to give to those in need.

Parents and children alike can honor St. Nicholas by giving gifts of money or goods to help the needy.  Do your children have extra clothing or toys?

What about making a run to the local thrift store?  Do your children receive a weekly allowance?  How about putting a dollar in the poor box at Church?

Or even more personally fulfilling, how about volunteering some time at your local parish or other charitable institution?

There are many portrayals in paintings and statues of St. Nicholas kneeling in prayer before Jesus in the crib.

Like the Blessed Mother, St. Nicholas points always to Christ and says, “Do whatever he tells you.” (John 2:5).

There can be no better way to acknowledge the love of St. Nicholas than to visit the very source of that love, the Eucharist.

O holy Father,
The fruit of your good works enlightens and delights the hearts of the faithful.
Who cannot wonder at your measureless patience and humility?
At your tender care for the poor?
At your compassion for the afflicted?
O holy Nicholas,
You have divinely taught all things well,
Now wearing your unfading crown,
You intercede for our souls.