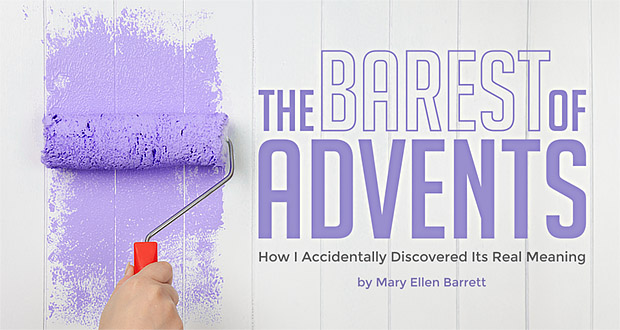 The Barest of Advents: How I Accidentally Discovered Its Real Meaning

Like many women when expecting a baby, I would feel an almost uncontrollable urge to nest.

I would make long lists of household things I wanted accomplished and called many family meetings. The children learned to avoid these meetings like the plague, and the mere sight of my roly-poly self heading toward my husband with a sheaf of papers was enough to send him screaming from the house.

When I was expecting my third baby, I gave my husband the following list to be accomplished in the remaining six weeks before the baby was born; finish the basement (it was completely unfinished) re-do the bathroom, paint the whole house and take two trees out of the back yard that were annoying me.

He asked me why I didn’t add widening the Long Island Expressway to the list. I reluctantly modified the list.

When I was expecting my eighth baby, our house was in the midst of a major renovation. An eighth baby will do that to you, you need a place to put him. That construction landing right at the very end of my pregnancy, and throughout the Advent season, gave me great inner turmoil.

I had this immense desire to make my home beautiful for both the seasons of Advent and Christmas, as well as a coming baby, but I was surrounded by sheetrock, spackle, large men with tool belts and very little heat. There was no furniture in the house other than air mattresses, a table and three chairs.

The Christmas decorations were in a storage facility a mile away and at nine months pregnant I had no ability to get in there and find them. It was time to change gears, but oh… how I was annoyed.

That Advent has since become one of the most precious in my memory. I bought a new Advent wreath and candles. We bought a tree and lights and made paper ornaments, and my husband dug one Nativity set out of the storage space. Since we could not be distracted by a lot of stuff, we were able to focus solely on the season of Advent and the upcoming arrival of the Savior.

In that sparse and bare Advent not only was I able to really discern what was important to a celebration but I was able to, for the first time, really ponder what Our Lady was going through. I was a pregnant lady in her (ahem) forties without a chair to sit on. She was a young girl on a grueling journey to an unfamiliar city where she had no friends and no home.

Mary had, I’m sure, the great desire we moms have to nest and prepare for her new baby. She wanted a clean home and some meals cooked. She probably wanted to prepare some new baby clothes and ask her mother for all kinds of advice about her coming ordeal. Yet there she was on a donkey moving slowly across the desert.

Those things she probably desired were not to be, but she did have the nesting of her heart. She had the words of the angel Gabriel, “The Lord is with you,” to hold close to. I thought of this often during that bare Advent, and I asked God to help me make this Advent a meaningful one for my family.

So we read a lot of books, we prayed the prayers of the Advent wreath faithfully each evening. We ate by candle light and read the Christmas story over and over. We read about St. Juan Diego and Our Lady of Guadalupe, whose feast days fall within Advent. We explored the O Antiphons and my children played their instruments and we sang songs and hymns.

It was all very simple and we didn’t miss a thing. None of the stuff I had lost and lamented was nearly as important as being together.

Now as I look back I feel that God specifically directed that Advent for my family. It was the last Christmas we were to spend with my son Ryan, and I treasure it. It is clear to me that God was looking after us in keeping our preparations bare and allowing us to focus on the gift of the child. That Christ Child, who was very shortly to meet my child in heaven, would welcome him home.

To have had that time to prepare and grow closer in love to God, is now a blessing I can clearly see and appreciate. Since that time it has been so important to me to have a bare Advent, to focus not so much on the doing but the being.

The being together in prayer, in laughter and in love.