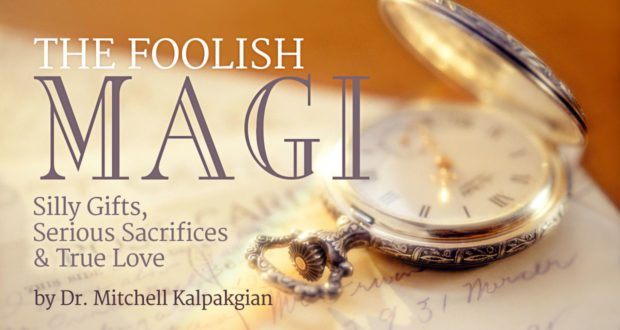 This famous short story that often appears in Christmas anthologies perfectly captures the Christian ideal of the joy of giving and the virtue of poverty of spirit. A young husband and wife struggling to pay their bills and to save enough money to do Christmas shopping find themselves desperate on the day before Christmas.

Della, the young wife, had planned on buying her beloved husband a costly platinum chain for his gold watch—a prized possession once owned by his father and grandfather. Despite saving and economizing, Della counts only $1.87 for a gift that costs $20.

Inspired by a sudden thought, Della rushes to a shop with the sign “Hair Goods of All Kinds” and sells her luxurious, flowing long hair—the glory of her beauty– for $20 and then rushes to buy her husband Jim the watch chain, “something fine and rare and sterling—something a little bit near to worthy of the honor of being owned by Jim.”

For Della no gift is too expensive for her husband, no matter the cost or the sacrifice. She will make herself poor in beauty and in money to make her husband rich in happiness and in love. Her gift to her husband is as precious as the gold, frank-incense, and myrrh that the Magi presented to the King of Kings— the best gifts worthy of God.

But her husband Jim has also been Christmas shopping, hoping to purchase a gift to honor his wife with a wish-come-true. Recalling how much she admired a set of costly jeweled combs of pure tortoise shell as the perfect gift to adorn her lovely tresses, Jim likewise is too poor in savings to afford this lavish gift. However, he too will sell his best possession to buy his wife this gem and shower her with Christmas joy.

When Della surprises him on Christmas day with the handsome chain to adorn his gold watch, Jim surprises Della with an amazing revelation: “I sold the watch to get the money to buy your combs.” Because Jim has no gold watch and Della has cut her long beautiful hair, the priceless gifts of the chain and the combs appear foolish, comical, and useless.

After this comic but heartwarming exchange of gifts, O. Henry notes that the story appears to be “the uneventful chronicle of two foolish children in a flat who most unwisely sacrificed for each other the greatest treasures of their house.” However, Della and Jim’s story actually records a tale of wisdom, not folly: “Of all who give and receive gifts these two were the wisest. Everywhere they are wisest. They are the magi,” writes O. Henry.

In impoverishing themselves of their most valued material possessions, Jim and Della enriched themselves with the purest wealth of love. They gave all, but they received more. Jim and Della are the wise magi because they brought their most precious gifts to one another, the unconditional love that gladly sacrifices for the beloved. They spent all their money. They emptied their pocketbooks. They sold their prized possessions. They did not count the cost. They knew it was more blessed to give than to receive. They would not be outdone in generosity.

Jim and Della resemble the Wise Men not only by their presentation of valuable gifts but also because they are knowledgeable like the Wise Men of the divine nature of love. Jim and Della’s love imitates the love of God who also emptied Himself and became poor that His children might become rich, who also parted with His greatest treasure, His only begotten Son, to reveal His immeasurable love.

In explaining the loss of her hair to purchase the gold chain, Della says to Jim, “But nobody could ever count my love for you.” God also says the same thing at each Christmas: “You are worth everything I have—even my Son, even His life.”

Although Jim and Della are happily in love, their exchange of gifts on this particular Christmas reveals to them even more profoundly the extraordinary beauty and bountiful goodness of each other’s hearts. They fall even more deeply in love with each other at the thought of their spouse’s great sacrifice for them.

Although man has always glimpsed the goodness of God in the glory and abundance of Creation, the birth of Christ in the Incarnation evokes special wonder at the miraculous nature of God’s tender, personal love in the total gift of Himself.

Just as Jim and Della cannot love each other enough as seen by the expensive and perfect gifts they buy for each other at Christmas, men and women cannot thank or praise God enough for the greatest of gifts they have received during this blessed season—a God whose love knows no limits.