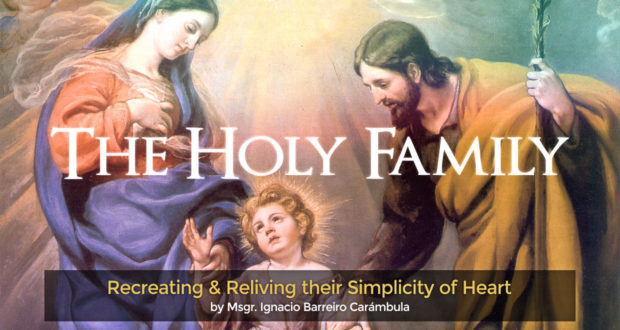 The Holy Family: Recreating & Reliving their Simplicity of Heart

We should venerate the Holy Family during the whole year, but there is a particular appropriateness in meditating on the family of God during Advent and Christmas, so that we may come to know and love the Holy Family better and follow their teachings with greater fidelity.

Three persons form the Holy Family: the Blessed Virgin Mary, Saint Joseph, and Jesus. Each of these three persons was exceptional in more than one way, but during the thirty years of the hidden life of Christ, save some extraordinary moments, most of the life of this family was entirely normal. For that reason, the information that the Gospels provides us concerning this period of Christ’s life is limited.

Without any doubt, the most important lesson that we can learn from this hidden life of Christ, a life that was lived most of the time in the happy normalcy of a family, is that we are called to sanctify all the moments of our everyday existence. Sanctity can and should be achieved in the habitual circumstances of a family, without waiting for any extraordinary calls or events.

Meditating on the Family

We begin our contemplation with the Blessed Virgin Mary. She was chosen from all creatures to be the Mother of God, Co-redemptrix of humanity, and Guide for the newly-formed Church’s first steps after the Resurrection and Ascension of Christ. A particularly rich point of meditation lies in the great gift Mary received of being conceived without original sin. She was free from all the weakness that normally besets human nature.

Before the Annunciation, she was given an exceptional education in the Temple of Jerusalem, which means she was the best possible human educator for her Son. Because her mind was not impaired by the wound of original sin, she was able to possess a degree of understanding of her divine motherhood.

It was her great joy to fulfill a unique mission in the process of our salvation, but at the same time, she suffered the sorrows that Simeon at the Presentation in the Temple had prophesied would be hers. We can imagine that these sorrows would have grown as Mary saw how many people rejected her Son, especially during His public ministry.

Next, we think of St. Joseph, a man of great and exceptional holiness, chosen by God for the unique mission of protecting and guiding His family on Earth. In Scripture, Joseph is called a just man (Mt. 1:19), a title sparingly used in both the Old and New Testaments to refer to a person of great virtue. He was a man who heard angels speak.

Following the guidance of an angel, he accepted the Divine Maternity of Our Lady, in spite of its apparent strangeness, especially given that he likely knew of Mary’s vow of virginity, which itself was so unusual in Israel at that time. Although we do not know the time of his death, tradition holds that Joseph died before the beginning of Jesus’ public ministry.

He died with Jesus and Mary at his side, and because of that he is the patron of holy death. Because he served as the protector and guide for the Lord’s family on Earth, St. Joseph is also the Patron of the Church.

Finally, we consider Jesus, Who on the one hand possessed infused knowledge due to His divine nature, but on the other hand was required to grow gradually like all persons due to His human nature. As any other human being, Jesus had to learn many social things and basic human skills such as walking and speaking; otherwise, His incarnation would not have been real. In this human development, Jesus was completely obedient to His parents (Lk. 2:51). Both God and man were able to witness how He advanced in wisdom and age (Lk. 2:52).

It is worth imagining the interaction amongst Joseph, Mary, and Jesus. How full of love and concern for one another it must have been, with a limitless charity toward each other in everything they said or did, in all circumstances of their lives, at crucial times and in their common everyday existence! Jesus did not have any of our imperfections in His human nature since he was untouched by sin, so he would have been a quick learner.

However, in the normal course of human learning to which Jesus submitted by reason of His incarnation, Mary and Joseph would still have had to teach Him with the patience that teaching a child always requires. Although we do not have clear historical proof, it is commonly held that Jesus learned the trade of His foster father and became a carpenter. Imagine the love of this Divine Son, who took lessons from St. Joseph and used the trade He had learned thereby to support His mother after the death of Joseph.

Certainly, there was a loving concern amongst the Holy Family and their relatives. This was demonstrated very early by Mary when she went in haste, as St. Luke tells us, to the assistance of her cousin Elizabeth for the birth of St. John the Baptist (Lk. 1:39). At the foot of the Cross, Mary herself was supported by several pious women, one of whom was Mary of Cleophas, called Mary’s sister by St. John (Jn. 19:25), and thus likely to have been a close relative of the Blessed Mother, based on biblical use of the term.

It is important to note that Jesus experienced failures in the effort to convert relatives. St. John tells us that “not even His brethren believed in Him” (Jn. 7:5). Jesus provides us a worthy example here as He continued to love His brethren and to seek their conversion, in spite of their continued rejection.

The Holy Family can serve as our guide in so many undertakings. In particular, they should guide our efforts to prepare young couples for marriage, to strengthen families, and to come to the assistance of couples in crisis. It is important to remember that the best formation for marriage is the one that each member of the future couple receives from his or her own parents.

Catholic families who form their children in the faith also prepare them to be good husbands and wives.

Our knowledge of the Holy Family should also lead us to meditate on the fact that through divine adoption, we are all called to be part of the Family of God. We received the great gift of divine filiation at Baptism, and received from the hands of Jesus Himself on the Cross, His own mother for ours.

The Holy Family is the “prototype and example for all Christian families” (Familiaris Consortio, n.86) because the Lord when He created the family had as an exemplar the Family of Nazareth. For that reason, it behooves us to try to imitate the virtues of this family.

In the same fashion, when God created man, he had as model the humanity of Christ. We should not be discouraged if we have such a high model to imitate because the Lord will always give us the graces to progress on our spiritual path. We need only be concerned with total simplicity of heart to follow the particular road that the Lord has marked for each of us.

At Christmas this year, let us ask the Holy Family to inspire us with their virtue, that we may become pure as the Blessed Mother, righteous as St. Joseph, humble as the Child Jesus, and full of the charity that reigns in their hearts.