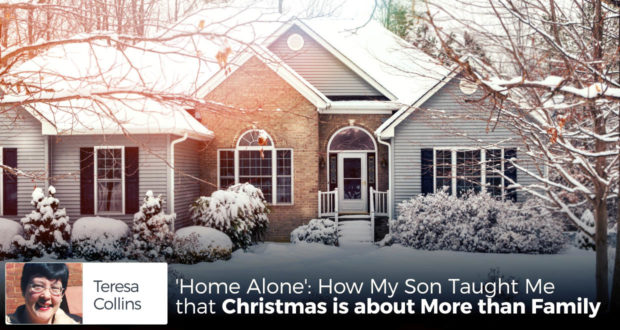 ‘Home Alone’: How My Son Taught Me that Christmas is about More than Family

On the second day of November, 2009, my husband and I left our home in Colorado and headed west to California to begin the task of moving his mother and selling her house.

My father-in-law had recently died, and my mother-in-law was returning to her childhood home in . We did not know as we drove westward that it would be almost two months before we would return home.

Many factors combined to prolong our stay in California

As the days of November passed, and December began, it became apparent that Christmas would soon be upon us but our work was not finished.

At this time we had no children still at home. Two had finished college and were working, and two were still in college, and were due home for Christmas break.

Their vacation time began, and we were not home to welcome them. They flew out to Colorado and stayed for a week with their aunt who lived two hours away from us.

Split up when we should be together.

As the days and weeks went by, my frustration and anger were growing. Christmas had always been for our family, as it is for many families, a time to come together after being separated, to enjoy each other’s company, and to catch up with each other, particularly now that we no longer all lived under the same roof.

And here we were, with Christmas day about a week away, and no one was at home.

In a conversation with our oldest son around this time, I gave vent to my disappointment at the way things had turned out. During a lull in my complaints, our son said, “Christmas is not primarily about family togetherness,” and his words more or less stopped me in my tracks.

During the remaining time we had, I still had moments of anger, but I don’t think they were as bad as they had been. Our son’s timely words had borne fruit.

A few days before Christmas, this same son flew in, picked up his brothers from their aunt’s house, and they drove home on a cold and icy winter night.

They stopped on the way to shop for all the things they could remember that we traditionally had for Christmas, and at last made it home up our steep, snow-covered, quarter-mile driveway, to a house which had been shut up for two months during a Colorado mountain winter.

Our sons cut down a Christmas tree from the property, picked up their sister at the airport in on Christmas Eve, went to midnight Mass that night, then drove home to decorate the house and await their parents’ return. They made a resolution not to quarrel, and they delved into the stash of Christmas candy on December 25th, since, parents or no parents, it was Christmas day.

About five o’clock in the late afternoon of a mild California Christmas day, after further frustrations and a number of last-minute delays, my husband and I set out on our trip eastwards towards Colorado and home, driving a large moving truck filled with my mother-in-law’s belongings.

We made it home after driving straight through from northern California, having had to detour southward because of the snowy mountain passes further north.

We arrived home in the small hours of December 27th, to find the fire burning in the wood stove, the living room covered with Christmas lights, carols playing very softly, and our oldest son dozing in an armchair, having volunteered to stay up for our arrival.

Our family celebrated our Christmas day on December 28th that year.

Grateful for the Memory

In the years that followed, I thought about the words our son had said to me about the meaning of Christmas, and when Christmas 2012 came around, I thought of them again.

We had only our youngest child home for Christmas that year, and I wrote in our card to our oldest son and his new wife:

“ You once reminded me, when I very much needed reminding, that Christmas is not primarily about family togetherness. But the two are not unrelated either, and we will miss you this Christmas.”

He told me later that when he read my note, he grew teary because he suddenly realized he had spoken words about the meaning of Christmas that were exactly the kind of thing his mother had said to him as a child.

Sometimes, however, we ourselves need to be reminded of those same things, and it is fitting that our children, who have learned what we taught them, are able to remind us.

And this God who became man for our sakes not only manifested His love by the Incarnation, but his birth brought into being the Holy Family, that family which shows us what love is, and which is the exemplar for all family love.

Teresa Collins is a graduate of TAC, along with her husband Richard, to whom she has been happily married for 34 years. Together they have raised five children, one of whom is now in eternity, and homeschooled them from kindergarten through high school. Teresa lives in CO, where she enjoys baking, sewing, philosophy, religion, and literature, as well as walking her mountain property and enjoying the gorgeous views of her beloved Rockies.