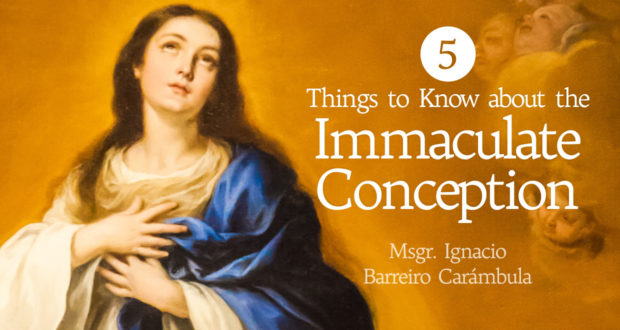 5 Things to Know about the Immaculate Conception

Today we celebrate the beginning of our Redemption with the Immaculate Conception of the Blessed Virgin Mary. For many centuries, Catholics believed in this dogma of faith but it was formally and solemnly defined one hundred and sixty years ago by Blessed Pius IX on December 8, 1854.

To understand the dogma of the Immaculate Conception of the Blessed Virgin Mary, we have to have a clear idea of the nature of original sin.

Mary was preserved from all stain of original sin at the moment of the infusion of her soul into her body and sanctifying grace was given to her before sin could have taken effect in her soul. Simultaneously with the exclusion of original sin, the state of original sanctity—innocence, and justice, as opposed to original sin—was granted to her.

By this gift, all evil tendencies, passions, and debilities essentially pertaining to original sin, were excluded.

The dogma of the Immaculate Conception of the Mother of God is clearly grounded in Sacred Scripture. The punishment of our first parents was accompanied by a prophecy of hope in Genesis 3:15, in which the Lord promised redemption through the cooperation of a woman who would become the mother of our Savior:

“I will put enmity between you and the woman, and between your offspring and hers; He will strike at your head, while you strike at His heel.”

The conqueror from the seed of the woman, who should crush the serpent’s head, is Christ; the woman at enmity with the serpent is Mary.

This prophecy, therefore, contains a direct promise of the Redeemer, and in conjunction therewith, reveals the masterpiece of God’s Redemption: the perfect preservation of His virginal Mother from original sin.

3. An Abundance of Grace

At the Annunciation, the Archangel Gabriel saluted the Blessed Virgin Mary calling her, “Hail, full of grace, the Lord is with you. Blessed are you among women” (Lk. 1-28). The salutation of the Archangel Gabriel – ‘Hail, full of grace’ – indicates a unique full abundance of grace, a supernatural, godlike state of soul, which finds its explanation only in the Immaculate Conception of Mary.

As Blessed Pius IX noted in Ineffabilis Deus, “by this singular and solemn salutation, otherwise never heard of, it is shown that the Mother of God was the abode of all Divine graces… never subjected to the one accursed.”

In its Decree concerning Original Sin, the Council of Trent established that “it is not its intention to include in this decree, where original sin is treated of, the blessed and immaculate Virgin Mary, the mother of God; but that the constitutions of Pope Sixtus IV, of happy memory, are to be observed” (DS 1516).

Finally, on December 8, 1854, the Blessed Pius IX defined that, “The most Blessed Virgin Mary, in the first instant of her conception, by a singular grace and privilege granted by almighty God, in view of the merits of Jesus Christ, the Savior of the human race, was preserved free from all stain of original sin.”

This solemn definition was reaffirmed in a particular way by the apparitions of Our Lady at Lourdes, as the Venerable Pius XII underlines in his Encyclical Letter Fulgens Corona:

“For indeed four years had not yet elapsed when, in a French town at the foot of the Pyrenees, the Virgin Mother… clothed in a shining white garment… showed herself to a simple and innocent girl at the grotto of Massabielle. And to this same girl, earnestly inquiring the name of her with whose vision she was favored… she replied: ‘I am the Immaculate Conception’.”

In truth, the dogma of the Immaculate Conception is perfectly in accordance with reason. It would not be logical to suppose that the flesh from which the flesh of the Son of God was to be formed, the flesh of His mother, should ever have belonged to a person that was subject to the enemy of man, from whose power Christ came to redeem us.

Now as Queen of Heaven, where she was assumed in body and soul, she continues to intercede for us and for the Church.

Under your protection, Blessed Mother of God, we take shelter, and we entrust ourselves and the Church to your powerful intercession.