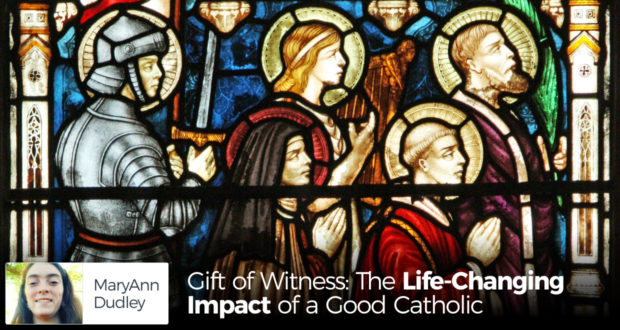 Gift of Witness: The Life-Changing Impact of a Good Catholic

MaryAnn Dudley knows just how powerful authentic Catholic living can be; she shares personal stories to showcase the impact we make by living good lives.

Gift-giving is a common occurrence in our lives. We give gifts at Christmas, birthdays, important milestones, and just for fun. Not all gifts are material, however.

We will often give the gift of our time or our service. Catholic parents pass on the Faith to their children. Homeschooling parents go even further and pass on the gift of learning and knowledge.

But we can, and often do, give so many more gifts to others.

One important gift that we both give and receive, often unconsciously, is the gift of witness. Witness is what we do when we live out our faith, when we give a good example to others. Through it, God can influence people to grow in holiness, to live more virtuously, and to practice their faith in a deeper way.

We give the gift of witness almost unknowingly, yet it has more of an effect on people than we can even guess.

3 Examples of Being a Witness

My mother was born to an Anglican mother and a Catholic father who didn’t really practice his faith. Although her grandmother made sure that she received Baptism, Reconciliation, and Holy Eucharist, my mom never really practiced her faith either.

Yet when she went to college, the witness of my father, a Catholic who always behaved properly and attended Mass on Sundays and Holy Days of Obligation, brought her back to the Catholic Faith. They were married and went on to have seven children, of which I am the oldest.

My mother now teaches Confirmation and CCD at our chapel.Because my father did not abandon his faith, not only did he bring my mom back into the Church, but his actions and my mother’s love of her faith are now affecting more families than we can ever know.

In my own life, I have seen how good example can change a family as well. When I was much younger, I was on a recreational soccer team. My coach and his family, now friends of ours, were lukewarm Catholics.

Another striking example of the power of witness occurred in Philadelphia on a Sunday during the World Meeting of Families.

A teenage girl went to Mass and arrived just as an earlier Mass had let out. There were people spilling out of the church and into the street. She was fortunate enough to get a seat, and, as the next Mass began, a woman sitting next to her leaned over and whispered, “What do I do? I’ve never been to one of these before, but I saw all these people and just felt like I had to be here.”

The woman had been drawn into the church just by seeing all the families and people attending Mass.

Being Influenced by Good Witnesses

Through the actions of others, I have been pushed to be better in my faith. The example of other teens in my youth group inspires me to be a better Catholic.

I have seen how people react to adversity without anger, and I try my hardest to do the same. I look to the saints, especially the martyrs, when things start getting difficult.

Oftentimes, it is easier for a person to do the right thing when he or she sees others doing it and therefore knows that it is possible.

Even the little things, a smile or a simple act of kindness, can show people the love that can be found by following the teachings of the Church. By living the Catholic Faith, we can change many people’s lives.

We never know when our actions might affect someone for the rest of their life. It can happen unconsciously as we go about our daily lives.

It happens to us. And it could change the world, one person at a time.

MaryAnn Dudley is sixteen years old, the oldest of seven, and a Seton Home Study School junior. She is very active and loves competing gymnastics, having fun with 4-H, and being a teen leader in her local Theology of the Body youth group. In her spare time, she enjoys reading, sewing, crocheting, and writing, especially for the student-run Seton Writer’s Club. She also loves fashion and promoting modest fashion.