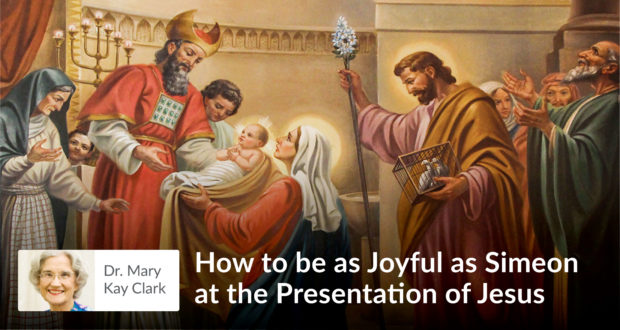 What joy must have been in Simeon’s heart at the Presentation of Jesus. Try this month, to seek his help to develop the virtues of faith, hope, and charity.

On February 2nd, the Catholic Church celebrates the Presentation of the Baby Jesus by His parents in the Jewish Temple in Jerusalem.

The humility, obedience, and love that are exhibited by Joseph and Mary are so beautiful and mysterious that we can easily overlook the actions of a special man who was present that day. His name is Simeon.

“And behold, there was a man in Jerusalem named Simeon, and this man was just and devout, waiting for the consolation of Israel; and the Holy Ghost was in him. And he had received an answer from the Holy Ghost that he should not see death, before he had seen the Christ of the Lord. And he came by the Spirit into the Temple. And his parents brought in the child Jesus, to do for Him according to the custom of the law. He also took Him into his arms, and blessed God and said: “Now Thou can dismiss Thy servant, O Lord, according to Thy word, in peace; because my eyes have seen Thy salvation which Thou has prepared before the face of all peoples…’”

It is impossible to overstate—and perhaps impossible to comprehend—the happiness that must have been in Simeon’s heart and soul at that moment. None of us can imagine Simeon’s holy emotions as he felt the tiny Sacred Heart of Jesus beating with love for him, for us, and for the whole world! In return, Simeon’s heart beat with total love for Jesus.

Other than the glorious Saint Joseph himself, what man has surpassed that joy in his life? We could write hundreds or thousands of words trying to explain Simeon’s happiness and fulfillment, but his joy can never be adequately expressed. We can only say: Simeon held God.

Origen, the third-century theologian, draws both a comparison and contrast between Simeon and the sick woman who touched the garment of Jesus during his public life. Origen writes:

“If we marvel to hear that a woman was healed by touching the hem of a garment, what must we think of Simeon, who received an Infant in his arms, and rejoiced seeing that the little one he carried was He who had come to let loose the captive! Knowing that no one could release him from the chains of the body with the hope of future life, but He whom he held in his arms. Therefore it is said, And he blessed God, saying, Lord, now let you your servant depart.”

As homeschooling families, there is something else that we should consider. To Origen’s point, “If we marvel to hear that a woman was healed by touching the hem of a garment,” how much more should we marvel at the special blessing of receiving the Body of Jesus in the Eucharist?

And if we marvel to hear that Saint Simeon was granted the grace to hold the Body of God, how much more should we marvel to receive the Body, Blood, Soul, and Divinity of Jesus, even on a daily basis? For human beings, Holy Communion is an incomprehensible blessing.

Called To Be Heroes

For the past thirty-five years, I have counseled homeschooling families to attend daily Mass. I understand that attending daily Mass is difficult. For some families, the word “difficult” doesn’t even begin to describe the trials of such a commitment. In fact, for many homeschool families, going to daily Mass is heroic.

If daily Mass is virtually impossible for you and your family, consider going just one more day per week. For instance, some homeschooling families attend Mass every Friday or every Saturday.

As difficult as it will be to attend Mass even one more day per week, think of Saint Simeon. He prayed many years and likely offered up many sufferings before being given the inestimatable grace to lovingly hold the small Christ Child in his arms, and likely to kiss His tiny forehead.

As we continue this new year, let’s be inspired by Simeon’s perseverance in a lifetime of prayer and sacrifice, let’s ask him to pray for us, and at least spiritually, let’s kiss Christ’s tiny forehead with all the love we can gather in our heart.

St. Simeon, pray for us.