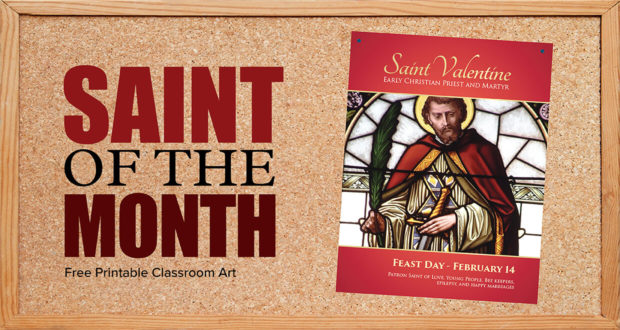 In Celebration of St. Valentine, Saint of Legend and Love

There are many legends on the origin of St. Valentine’s Day, but we know that he was a man of great faith and is the patron of love, devotion, and romance.

Saint Valentine of Rome was a 3rd Century Roman priest during the persecution of Christians under the reign of Claudius II.

Much of Valentine’s life is not reliably known. There are many legends about him, but they all have something in common. In every legend, his Faith is often put to the test in one way or another.

The Legends of Saint Valentine

One such legend is that Valentine restored the eyesight of a judge’s daughter to prove the validity of Jesus. The judge and his family converted to Christianity soon after. Later, Valentine was arrested for converting people to Christianity, and was sent to Rome.

In Rome, he was once again arrested. This time for marrying Christian couples and aiding persecuted Christians, both of which were serious offenses. After a while, Valentine became friendly and got along very well with Emperor Claudius until he tried to convert him to Christianity. Angry, the Emperor demanded him to renounce his Faith or be beaten with clubs and beheaded. Valentine refused and was executed outside the Flaminian Gate on February 14.

Another legend says that while he was in prison Valentine healed the jailer’s blind daughter and left her a note before he died signed “Your Valentine.”

Although there are not a lot of accurate accounts of his life, we do know that Saint Valentine did indeed exist. Archaeologists have uncovered a Roman catacomb and an ancient church dedicated to him near the gate where he died.

The Origin of Valentine’s Day

Saint Valentine’s feast day is on February 14. The origin of this holiday as it is today is not truly known or agreed upon. Some scholars say that Valentine’s Day was created to overpower the pagan holiday, Lupercalia. Others say that it originated in England during the Middle Ages. Either way, it is recognized as a day of love, devotion, and romance.

Saint Valentine is the patron saint of love, young people, beekeepers, epilepsy, happy marriages, engaged couples, fainting, greetings, against the plague, and travelers. He is normally depicted with birds and roses, but can also be shown with a sword, giving sight to a blind girl, or performing a wedding.

Download the free printable monthly saint page using the button below. You can pin it to your classroom wall or place it on your refrigerator to help your children learn more about Saint Valentine.