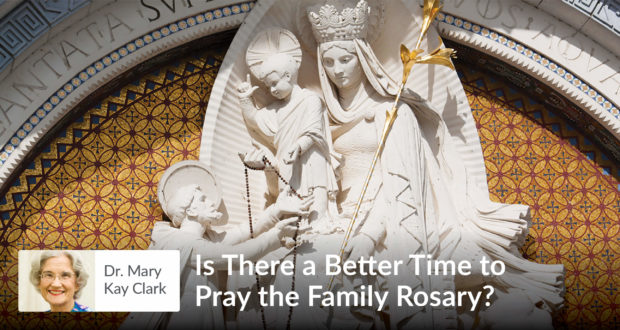 Is There a Better Time to Pray the Family Rosary?

The Rosary is the special prayer that can be said any time, in any place, aloud or in our heart, and essential for the future of Catholicism in our nation.

Many Americans are going through all kinds of difficulties at present: job troubles, marital infidelity, drug and other forms of addiction, the onslaught of pornography that destroys innocence and tears apart marriages—the list goes on and on.

America needs prayer. The best prayer is the Mass, which includes the Our Father given to us by Jesus. However, certainly because many people cannot attend Mass, the Blessed Mother appeared to people in different countries throughout history, to give us all a special prayer which does not require recitation in a church.

This special prayer can be said at any time, in any place, aloud or in our heart. It even includes inspired words from the Bible. That prayer is the Rosary, which includes the Our Father and the Hail Mary.

The Rosary is not only a recitation of the words of Jesus in the Our Father, and the words of Gabriel to Mary, but also a reflection on the events in the lives of Jesus and His Blessed Mother Mary: the Joyful, the Sorrowful, the Luminous, and the Glorious Mysteries.

A Popular Devotion to the Blessed Mother

The Rosary first became a popular devotion after the Blessed Mother appeared to St. Dominic in 1208. Following her directions, he led the Catholics of Europe against the brutally violent Albigensians by gathering crowds of people to say the Rosary. The Blessed Mother also inspired St. Alphonsus Liguori to write the most amazing reflections on each mystery of the Rosary in his book The Glories of Mary.

Many of us are familiar with another great book, The Secret of the Rosary, written by St. Louis de Montfort. St. Louis wrote that, after devotion to Our Lord Jesus in the Blessed Sacrament, “the holiest and solidest of all devotions” is devotion to Our Lady.

In particular, the Rosary always has been a popular devotion by Christian soldiers. Victories over pagans in battle often were attributed to the Blessed Mother after special Rosary novenas.

Polish troops were known for their devotion to Mary and the Rosary. The early Polish national banner included an image of the Blessed Mother, and their “war song” was a hymn to Mary. Scottish knights left their “golden rosaries” in Our Lady’s chapels as a pledge of Faith in her assistance.

Mary’s Message For All Mankind

Countless times throughout history, the Blessed Mother appeared to various saints, such as St. Bernadette at Lourdes, asking again and again for people to pray the daily Rosary for the salvation of sinners. (On Sunday morning, EWTN presents the live Recitation of the Rosary at the Lourdes shrine, on the very spot where she appeared to St. Bernadette.)

One of the most famous appearances of the Blessed Mother is when she appeared to the three children at Fatima during World War I. She told them to tell the world, suffering then as now, to pray the Rosary every day.

“Pray, pray a great deal, and make sacrifices.…Let people continue to say the Rosary every day to obtain the end of the war.”

She asked the children to have a chapel built with a statue of Our Lady of the Rosary.

During some terrible situations in the past, especially during wars, the Blessed Mother would appear with a message for all mankind. Her requests for prayer always included saying the Rosary.

In the 1950s, Father Peyton, responding to her messages, started a Family Rosary devotion on American radio and television, not only to strengthen family life, but also to bring hope to those suffering under Communism. At that time, bishops, priests, and nuns, as well as Christian parents, were being persecuted by Communist dictators in Europe. Father Peyton’s theme for his show was “The Family that Prays Together, Stays Together.”

The various crises we are seeing in our society, in our government, in our church, and the misery and suffering we are seeing throughout the world, should make our families realize the need to pray daily for the Catholic Church, for the pope and the priests, for the United Nations to stop spreading abortion, and for America to return to being a Christian nation.

Besides daily Mass, reception of Jesus in the Holy Eucharist, and frequent Confession, the daily Family Rosary is essential for the future of Catholicism in our nation.