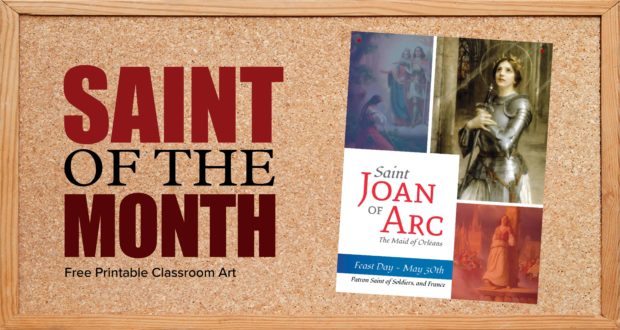 Maid of Orléans St. Joan of Arc Patron of Soldiers and France

St. Joan of Arc, Maid of Orléans, patron saint of soldiers and France, had a typical life growing up; spinning wool and helping to gather the harvest. But at 13 years old, she began hearing the voices of saints who gave her a mission for her from God; to save France. Against all odds, she succeeded.

In 1412, with the Hundred Year War still raging on, a peasant girl named Joan was born in a small French village.

No one would have imagined that one day she would help lead the French to many victories, and ensure that the Dauphin (the rightful heir to the throne of France) be crowned king.

Joan had a typical life growing up; spinning wool and helping to gather the harvest. She would occasionally encounter soldiers from the war between France and England when they either burned the church, or tried to commandeer the livestock.

When she was around 13 years old, Joan began hearing the voices of St. Michael the Archangel, St. Catherine of Alexandria, and St. Margaret of Antioch. At first all they told her was to live a virtuous life.

Gradually, they came more often and eventually told her they had a mission for her from God. Her mission was to save France and to help crown the Dauphin as king at Reims. When Joan asked how she, a peasant, could possibly do that, her Voices said that God would be with her.

The Maid of Orléans

Around the age of 16, Joan had her cousin take her to Vaucouleurs, where she petitioned Robert de Baudricourt, the local lord, for permission to visit the French Royal Court in Chinon.

At first, Baudricourt refused, however, he changed his mind after she correctly predicted a military reversal at the Battle of Rouvray near Orléans. He believed that she could only have seen that through Divine revelation.

Boudricourt had Joan escorted across enemy territory to Chinon where the Dauphin, Charles VII, resided. For her safety, she was asked to dress as a male soldier. Once at Chinon, she met privately with Charles and won his trust.

Worried that the enemy might twist her claim of doing God’s work and call her a sorceress, the Dauphin’s advisers suggested that a background inquiry be done, as well as a theological exam to verify Joan’s claim, and Charles agreed.

In 1429, Charles sent her to the clergymen at the University of Poitiers for examination where they found Joan to be “of irreproachable life, a good Christian, possessed of the virtues of humility, honest, and simplicity.” However, they recommended that she be tested by lifting the siege of Orléans.

Though not the commander, Joan led the army in taking a number of fortresses around Orléans, all the while holding her banner and giving encouragement.

During the battle for the fortress of Les Tourelles, she was shot with an arrow between her neck and shoulder. However, she returned to the fight to show support. The next day, the English left Orléans and the siege was over.

Eventually, Reims was recaptured and the Dauphin was officially crowned King of France. Joan continued to march with the French army into battle with each one ending in victory.

Once crowned, Charles lost his nerve and ignored Joan’s constant pleas of recapturing Paris. A year later, 18-year-old Joan was captured by Burgundian troops. There were several attempts to free her, but she was eventually sold to the English.

Her Trial and Death

Even though there was no evidence, Joan was put on trial for heresy and witchcraft. She was denied a legal adviser, and the tribunal was made up of all pro-English clergy. Those who did object to the trial were threatened to be killed.

Joan was able to escape every theological trap set for her in her trial. This surprised many since she was an illiterate peasant girl.

One of the most well-known exchanges was when she was asked if she knew if she was in God’s grace. The trap was that if she had said either yes or no, it would’ve been considered either heresy or a confession of guilt. Joan replied,

Despite the lack of evidence against her, Joan was sentenced to be burned at the stack. On May 30, 1431 she prayed for her enemies before she stepped on the pyre. She asked for a cross to be held in front of her, and an English soldier made her a cross that she put in front of her dress. After she died, her ashes were thrown into the Seine River so that her relics could not be collected.

Twenty-five years later, a second Church trial nullified the earlier verdict and declared Joan innocent. She became a symbol of the Catholic League during the 16th century, and was canonized a saint by Pope Benedict XV in 1920.

Saint Joan of Arc, also known as the Maid of Orléans, is the patron saint of soldiers and France. Her feast day is on May 30th.

Saint Joan of Arc, pray for us.

Prayer to St. Joan of Arc – For Faith

I pray that I may be as bold in my beliefs as you, St. Joan. I ask that you ride alongside me in my own battles. Help me be mindful that what is worthwhile can be won when I persist. Help me hold firm in my faith. Help me believe in my ability to act well and wisely.

Download the free printable monthly saint page using the button below. You can pin it to your classroom wall or place it on your refrigerator to help your children learn more about Saint Joan of Arc.