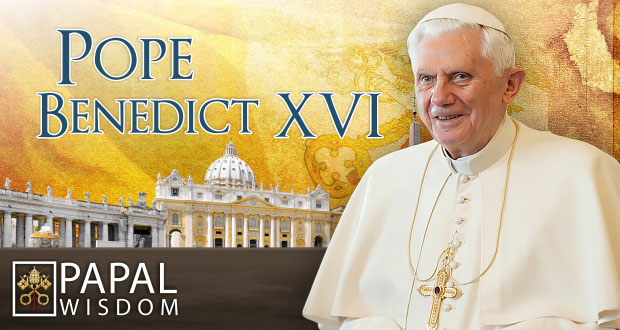 Pope Benedict to the U.S. Bishops

One of the most memorable aspects of my Pastoral Visit to the United States was the opportunity it afforded me to reflect on America’s historical experience of religious freedom, and specifically the relationship between religion and culture. At the heart of every culture, whether perceived or not, is a consensus about the nature of reality and the moral good, and thus about the conditions for human flourishing. In America, that consensus, as enshrined in your nation’s founding documents, was grounded in a worldview shaped not only by faith but a commitment to certain ethical principles deriving from nature and nature’s God. Today that consensus has eroded significantly in the face of powerful new cultural currents which are not only directly opposed to core moral teachings of the Judeo-Christian tradition, but increasingly hostile to Christianity as such.

For her part, the Church in the United States is called, in season and out of season, to proclaim a Gospel which not only proposes unchanging moral truths but proposes them precisely as the key to human happiness and social prospering (cf. Gaudium et Spes, 10). To the extent that some current cultural trends contain elements that would curtail the proclamation of these truths, whether constricting it within the limits of a merely scientific rationality, or suppressing it in the name of political power or majority rule, they represent a threat not just to Christian faith, but also to humanity itself and to the deepest truth about our being and ultimate vocation, our relationship to God. When a culture attempts to suppress the dimension of ultimate mystery, and to close the doors to transcendent truth, it inevitably becomes impoverished and falls prey, as the late Pope John Paul II so clearly saw, to reductionist and totalitarian readings of the human person and the nature of society.

With her long tradition of respect for the right relationship between faith and reason, the Church has a critical role to play in countering cultural currents which, on the basis of an extreme individualism, seek to promote notions of freedom detached from moral truth. Our tradition does not speak from blind faith, but from a rational perspective which links our commitment to building an authentically just, humane and prosperous society to our ultimate assurance that the cosmos is possessed of an inner logic accessible to human reasoning. The Church’s defense of a moral reasoning based on the natural law is grounded on her conviction that this law is not a threat to our freedom, but rather a “language” which enables us to understand ourselves and the truth of our being, and so to shape a more just and humane world. She thus proposes her moral teaching as a message not of constraint but of liberation, and as the basis for building a secure future.