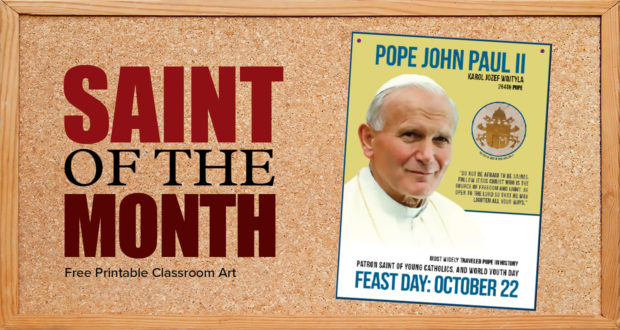 “Do not be afraid! Open wide the doors for Christ….” Pope John Paul II in his Inaugural Address, St. Peter’s Square, October 22, 1978

Pope John Paul II was born Karol Josef Wojtyla on May 1920 in Wadowice, Poland, the youngest of three children. He was born into a loving family but by his twelve birthday, he had lost his mother and older brother. His devout father raised ‘Lolek’, as John Paul was known to friends, and guided his spiritual formation.

“I was left alone with my father, a deeply religious man. Day after day I was able to observe the austere way in which he lived …his example was in a way my first seminary, a kind of domestic seminary.” Karol Wojtyła

He attended an underground seminary during the German occupation of Poland in World War II and was ordained a priest on All Saints Day in 1946. He went to Rome to study and returned to Poland as an assistant pastor and began his work with young people. He taught at University and was consecrated auxiliary bishop of Kraków on July 4, 1958 – the youngest bishop in the history of Poland

He eventually was elected the 264th Pope on October 16, 1978 and served for 26 years. He was the most widely traveled Pope in history, visiting 129 countries. He was also fluent in multiple languages.

JP2 started World Youth Day in 1984 which is still being held every four years at a different country. WYD encourages young people to live their Faith, and to live peacefully together.

An advocate of human rights, John Paul II spoke out against governments that oppressed the people’s basic rights. He was also against abortion , insisting that the unborn must have the same dignity and rights as all people.

He had a special devotion to Our Blessed Mother and to the Divine Mercy. He instituted Divine Mercy Sunday and proclaimed St. Faustina Kowalska, “Apostle of Divine Mercy” a saint. John Paul II beatified 1,338 people and canonized 482 saints, more than all of the popes in the last 500 years combined.

Pope John Paul II died during the first vespers of Divine Mercy Sunday, April 2, 2005, at 9:37 p.m. His death came soon after his final audible words, “Let me go to my Father’s house.”

Over three million pilgrims traveled to Rome to pay homage to the pope, some standing in line for over 24 hours to pray in thanksgiving for their beloved Holy Father.

“The answer to the fear which darkens human existence at the end of the twentieth century is the common effort to build the civilization of love…. With the help of God’s grace, we can build in the next century and the next millennium a civilization worthy of the human person, a true culture of freedom. We can and must do so!” Pope John Paul II in his address to the United Nations, October 5. 1995

JP2! We love you!
John Paul the Great, pray for us!

Download the free printable monthly saint page using the button below. You can pin it to your classroom wall or place it on your refrigerator to help your children learn more about Pope St. John Paul II.