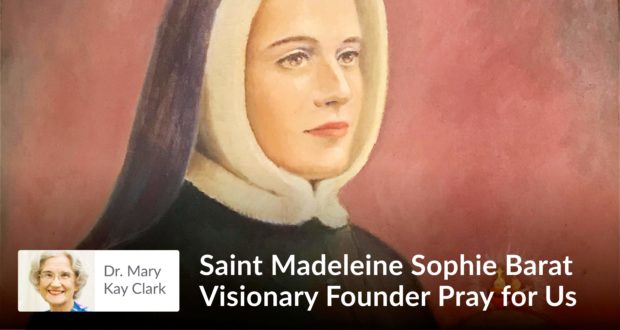 Schools of Mother Barat succeeded because prayerful sisters in each country, inspired by the Sacred Heart of Jesus, were empowered to teach in unique ways.

Saint Madeleine Sophie Barat has been a favorite saint of mine since I was very young.

My mother often talked about Mother Barat because she had attended one of the Sacred Heart girls’ schools which were founded by Mother Barat’s religious order. Because of her wonderful experience at that school, my mother retained a deep affection for Mother Barat throughout her life and communicated it to me frequently.

In fact, she painted a large oil painting of Mother Barat, which now hangs in the entrance of the Seton Home Study School. If you are a Seton family, she has been an influence on your family’s life as well. Let me explain why. 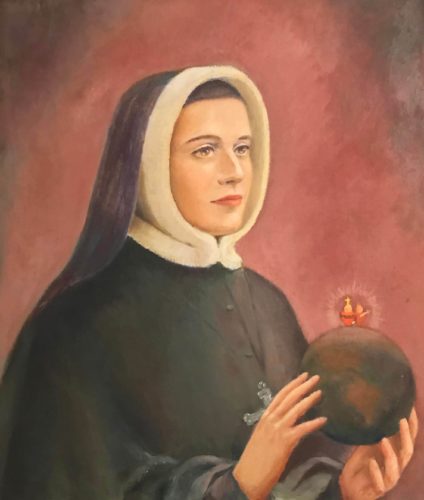 Madeleine Sophie Barat was born in France on a tumultuous mid-December night in 1779. Because of her mother’s stress due to a house fire next door, her mother went into labor early and delivered tiny Madeleine Sophie two months before her due date.

Living at a time when a preemie was much in danger, her concerned parents had her baptized the next morning with Madeleine’s brother Louis standing in as godfather. It was a spiritual role, and her brother Louis played it seriously and heroically for many years to come.

The neighbor’s house fire was a mere prelude to the violent chaos that would set France ablaze in the French Revolution. The practice of the Catholic Faith and Catholic schools were effectively outlawed.

Madeleine’s twenty-two-year-old brother Louis, who had been educated in a seminary, recognized Madeleine’s love for God and the Church. He began homeschooling his ten-year-old sister, and came to understand and appreciate that she was not only blessed with a powerful mind but also with a heart dedicated to loving God. Thus, Louis devoted himself to teaching her an invaluable Catholic-oriented curriculum.

Largely with the knowledge that her brother had taught her, she became a nun and soon established an order of sisters who would teach Catholic girls – the Society of the Sacred Heart. The major commitment of the Sacred Heart nuns was to educate young girls to become Catholic leaders, Catholic mothers, and Catholic teachers.

The fantastic growth of the Society in several countries is considered miraculous. The Sacred Heart religious order went on to be very influential and successful in Europe and eventually in America as thousands of young girls and women graduated from the Sacred Heart schools.

Mother Barat wrote thousands of letters to the nuns under her who ran the various schools in several countries. Her letters were of great spiritual comfort and encouragement to the many young nuns who took on the huge responsibility of teaching young girls primarily the Catholic Faith, but also the other academic subjects as well.

Mother Barat seldom slept, as she dedicated her evening hours to answering the letters from the many Sacred Heart nuns who were in charge of about fifty Sacred Heart schools. However, there was one nun, a spiritual companion and advisor, to whom she opened her heart, her concerns, and her worries.

It was Sister Philippine Duschene, the beloved Sacred Heart nun who was later proclaimed a saint, who opened several Sacred Heart schools in the United States, and was beloved by American immigrant and Native American children.

Though Mother Madeleine Sophie Barat had an overall vision for her schools, she realized that the circumstances in various countries were very different. She was inspired to not make the same rules for all the Sacred Heart schools.

Her schools were successful because she believed that the prayerful sisters in each country were inspired by the Sacred Heart of Jesus not only to teach the Faith but also to use teaching techniques which would be most successful for the particular culture or situation which the young nuns had to deal with.

Mother Barat believed that if the sisters stayed in constant prayer to be led by the Sacred Heart of Jesus, they would be inspired to use whatever teaching techniques or materials which were appropriate for the children of that particular area or culture.

Mother Barat believed that countries and cultures are unique, and each child within each country is unique, too. Like Catholic homeschooling mothers today, the Sacred Heart teaching nuns were inspired to teach their children with the ideas given them via prayer.

At the end of her life, Mother Barat could look back on all the Sacred Heart schools as a wonderful and ongoing accomplishment for the salvation of souls. She made a greater impact than she could have ever seen. Seton Home Study School is largely based on the philosophy and education of St. Madeleine Sophie Barat, as well as St. Elizabeth Ann Seton.

Both spiritual educational leaders, Madeleine Sophie and Elizabeth Ann understood the value of teaching according to the ability and strengths of the individual student. Madeleine’s experience of being taught by her brother made her recognize the value of parents and other family members in helping to teach children, often by the practice of daily Catholic life.

Parents know best how to teach their own children. While Seton sends books and suggested lesson plans to parents, Seton encourages parents to teach according to the ability of the child, to use references according to their background, to teach as slowly or as quickly as they need in order to learn and to understand, adjusting the lessons as necessary for the child.

Most of all, Seton encourages parents to stay in prayer with their children and to attend Mass as often as possible.