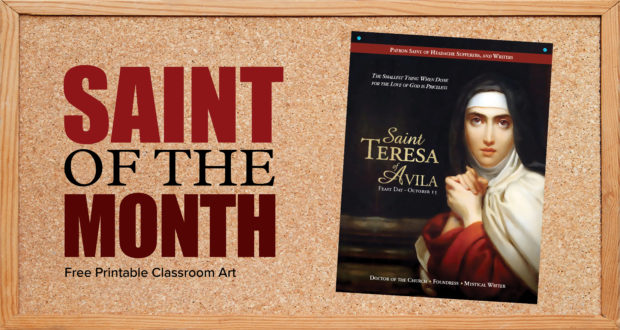 Saint of the Month: St Teresa of Avila

It was not easy for St. Teresa of Avila, Doctor of the Church, to discern her vocation but once she did, her influence even within her lifetime was remarkable.

Saint Teresa of Avila lived in a time of exploration, turmoil, and reform.

Christopher Columbus had discovered the New World (America) not 20 years before she was born. Luther started the Protestant Revolt about two years after her birth, and Teresa died about 20 years after the Council of Trent.

Teresa de Cepeda y Ahumada was born in 1515 in Avila, Spain to a pious family. Growing up, she loved learning about the saints. She had such a desire to become a saint herself that when she was 7 years old, Teresa and her brother, Rodrigo, decided to secretly go into the country of the Moors to lay down their lives for Christ as martyrs. They didn’t get very far however before they were found by an uncle and taken back home.

When Teresa was about 14 years old, her mother passed away. Distraught, Teresa turned to Our Lady for comfort.

“I threw myself down in despair before an image of the Mother of God. With many tears, I implored the Holy Virgin to become my mother now. Uttered with the simplicity of a child, this prayer was heard. From that hour on, I never prayed to the Virgin in vain.” -St Teresa

In her later teens, Teresa became more interested in worldly matters: fashions, perfumes, looks, etc. Eventually, her father, hoping to curb her growing worldliness, sent her to a convent of Augustinian nuns for education. She was taken back home a year and a half later when she became very ill.

Life as a Carmelite Nun

After her recovery, Teresa started to seriously discern a vocation to religious life. She felt moved to religious life but had some reservations. After thinking it over carefully, she decided to enter the convent.

When Teresa told her father, he forbade her to enter while he was alive. Fearing she might change her mind and relapse into her old ways, she secretly entered a convent of Carmelite nuns at age 20, and her father relented.

The convent, however, while following the Carmelite Rule, allowed a certain amount of slack in religious discipline. It allowed the nuns to go out on daily outings, socialize with friends from town, and provided a comfortable living. Teresa was not immune to this lax practice of the religious life.

Then Teresa became sick again and for three years led a quiet life of mental prayer, and spiritual reading. When she finally recovered, she found it easy to fall back into her old habits and continued her spiritual life only halfheartedly.

“I voyaged on this tempestuous sea for almost 20 years with the fallings and risings.” – St Teresa, Autobiography

Eventually, Teresa completely broke away from her old ways and truly began to live her life for God. She became very close to Him and would meditate in what she called “prayer of quiet” and “prayer of union”.

Teresa would experience a sense of oneness with God, and would become so overwhelmed with His Divine Love, it would send her into a spiritual rapture. She would even occasionally levitate. When she felt it happening, Teresa would ask one of the other nuns to hold her down.

St Teresa suffered a lot of persecution from people who misunderstood her or opposed her efforts to lead herself and others to a more authentic religious life. Once, Teresa complained to God about it and He replied, “That is how I always treat my friends.” Humorously, St Teresa said, “That must be why You have so few friends!”

Because it was difficult to live a life of prayer in her current convent, Teresa wanted to establish a reformed Carmelite convent; a community that led a more contemplative life.

In 1562, despite opposition, she was able to found her first Discalced Carmelite convent. They were more traditional and lived a life of prayer, emphasizing the importance of experiencing God’s Love.

“The important thing is not to think much but to love much and so do that which best stirs you to love. Love is not great delight but desire to please God in everything.” -St. Teresa

Teresa dedicated the rest of her life to reforming the Carmelite Order, and eventually founded 17 other convents. When she was 53 years old, she even met 26-year-old St. John of the Cross, who was working on reforming the male Carmelite monasteries.

St. Teresa was an excellent writer. Her three works, Autobiography (1565), The Way of Perfection (1573), and The Interior Castle (1577), give insights on spiritual life that are still read today. These were not her only works; Teresa also wrote poetry. One of her more popular works can be found below.

St Teresa of Avila died in 1582 at the age of 67. She was canonized in 1622 by Pope Gregory XV and declared a Doctor of the Church in 1970. She, along with St. Catherine of Siena, are the first women to be honored as such.

St Teresa is the patron saint of headache sufferers and writers. Her feast day is October 15.

St. Teresa of Avila, pray for us

God Alone is Enough
Let nothing upset you,
let nothing startle you.
All things pass;
God does not change.
Patience wins
all it seeks.
Whoever has God
lacks nothing:
God alone is enough.

Download the free printable monthly saint page using the button below. You can pin it to your classroom wall or place it on your refrigerator to help your children learn more about Saint Teresa of Avila.