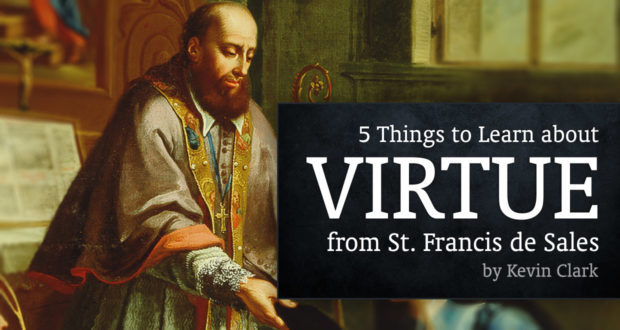 5 Things to Learn About Virtue from St. Francis de Sales

St. Francis de Sales (1567-1622) was a Bishop and spiritual writer, best known for his work Introduction to the Devout Life, which was first published in 1609.

In that book, Francis takes up several issues involving virtue. Here are five of the things we can learn from him.

1. Pick a specific virtue to practice.

“It is well for everybody to select some special virtue at which to aim, not as neglecting any others, but as an object and pursuit to the mind.”

If we find ourselves with many opportunities each day to practice patience, but few chances to practice magnanimity, then patience might be the proper virtue upon which to focus. If we are aware of a specific vice in ourselves, such as impatience, then practicing the opposite virtue will help to rid ourselves of the vice.

“Call often to mind that our Savior redeemed us by bearing and suffering, and in like manner we must seek our own salvation amid sufferings and afflictions; bearing insults, contradictions and troubles with all the gentleness we can possibly command.”

Patience is a virtue which touches are souls very deeply, because to be impatient is to be internally distressed and without peace. St. Francis states very wisely that it is easier to be patient with those whom we do not greatly esteem, because we do not expect great charity from them.

It is our own family and friends, those whom we love, whose shortcoming and criticisms can wound us the most. It is with these people we need to show the most patience.

St. Francis suggests that we try to bear up as much as possible without complaining. But if we feel it necessary to talk to others about our troubles, he gives very good advice,

“If it is needful to complain to some one, either as seeking a remedy for your injury, or in order to soothe your mind, let it be to some calm, gentle spirit, greatly filled with the Love of God; for otherwise, instead of relieving your heart, your confidants will only provoke it to still greater disturbance.”

We spend so much time worried about our dignity, or our good name, or what others think of us. Yet, knowing ourselves better than others know us, we likely realize that others have a higher opinion of us than we deserve.

Even the Blessed Mother, described by the poet Wordsworth as “our tainted nature’s solitary boast” does not speak of her personal greatness in her Magnificat, but speaks only of what the Lord has done for her: “For He that is mighty has magnified me.” If she who was without sin gives all the glory to God, how much more so should it be with us?

St. Francis warns us against false humility, however. We might speak of our lowliness to others to show them how humble we are, but “we should be very much vexed to be taken at our word and generally considered what we call ourselves.”

To guard against false humility, St. Francis suggests, “never cast down your eyes without humbling your heart; and do not pretend to wish to be last and least, unless you really and sincerely mean it.”

“Correction given in anger, however tempered by reason, never has so much effect as that which is given altogether without anger; … Just so when reason prevails, and administers reproof, correction, and punishment in a calm spirit, although it be strict, every one approves and is content; but if reason be hindered by anger and vexation (which Saint Augustine calls her soldiers) there will be more fear than love, and reason itself will be despised and resisted.”

Although we might say that anger can be righteous, as showed by Jesus in the temple, anger is not a thing which can be well controlled when it is indulged. And, it is easy to fool ourselves into thinking that our anger is righteous when it is not, “for no angry man ever yet but thought his anger just.”

If we have acted badly in anger, St. Francis suggests that we waste no time in trying to make amends. “There is an old saying, that fresh wounds are soonest closed.”

Obedience is the virtue which is perhaps hardest, because it requires us to bend our will to the will of another—whether to God or to other people. But how to subject our wills to the virtue of obedience? St. Francis tells us that a good start to learning obedience is simply to bend to the will of others when we are not required to.

“If you would acquire a ready obedience to superiors, accustom yourself to yield to your equals, giving way to their opinions where nothing wrong is involved, without arguing or peevishness.”

How peaceable and kind will interactions be among brothers and sisters if they take this advice?

Obedience is not merely the external act of complying with a command of one in lawful authority. It is an internal disposition which leads us to comply with a generous spirit.

“Moreover, obey quietly, without answering again, promptly, without delay, cheerfully, without reluctance; and, above all, render a loving obedience for His Sake Who became obedient even to the death of the Cross for our sake.”

The full text is available online at Introduction to the Devout Life.