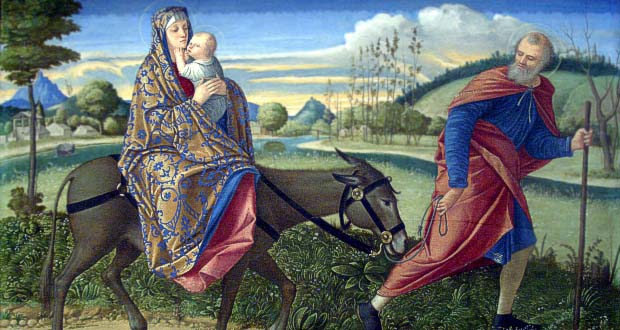 ‘Be Nice’: Love in the Face of Sorrow

“But I say to you, Love your enemies: do good to them that hate you: and pray for them that persecute and calumniate you.” Matthew 5:44

But what if you have real enemies? Not enemies who might say an unkind word here or there, but enemies who want you and your entire family dead and, given any opportunity, will bring that to pass?

Consider the Feast of the Holy Innocents, which falls on December 28 each year. The Gospel of Matthew relates in a few words what must have forever shattered the lives of all those involved:

Herod, perceiving that he was deluded by the wise men, was exceeding angry; and sending killed all the men children that were in Bethlehem, and in all the borders thereof, from two years old and under, according to the time which he had diligently inquired of the wise men. Then was fulfilled that which was spoken by Jeremias the prophet, saying: “A voice in Rama was heard, lamentation and great mourning; Rachel bewailing her children, and would not be comforted, because they are not.”

What fear and panic and despair must have come upon the parents as the soldiers descended upon Bethlehem and started moving house to house, killing the children. The screams from the first houses would have pierced the silent night, and awakened those in nearby homes, who would themselves soon be visited. Just as the soldiers went from house to house, the whispers and shouts and exclamations of disbelief would have migrated from one home to another. Finally, in the aftermath, the cries of “It cannot be!” would have changed to “How could anyone have done this?”

The massacre of these children is almost unimaginable, but probably was even worse than it sounds. Killing all the boys two and under would be bad enough, but we can surmise that the soldiers who carried out these orders were not sticklers for perfection. Certainly they killed anyone who looked like a boy two and under, so girls and older children perished as well. Beyond the children, surely some parents tried to protect their children, shielding them in their arms and pleading for their lives, or hiding them away, or desperately attempting to flee the onslaught of the merciless blades. These too would have been struck down.

How many died in this attack, we cannot know. Perhaps it was dozens; perhaps it was scores; perhaps it was hundreds. But even if only one had been put to the sword, if that one was your child, would it not have been enough to end life as you knew it? How do you make breakfast the morning after the government has slaughtered your children? How do you sweep your home, and tend the fields, and draw water from the well when the blood-soaked floor still bespeaks of the horrors which took place?

As hard as it would be to put a life back together, it would be nothing compared to putting a soul back together. After such an event, what could one desire in this life but vengeance? What could one want more than to see the death and destruction of those who willed so great an evil? If it were possible, we would want them killed not once, but over and over, until all the pain that they inflicted on others could be visited upon them.

It is precisely as an answer to this that Jesus says, “Love your enemies.”

Jesus was born amidst death and injustice, and died among the same. He knew enemies. He knew what had come into the world with him, and He knew what was to come. In the face of that, in the face of death upon the cross, He still preached love. He knew the darkness in the hearts of men far better than we; yet, He made no exception to his command.

Had those parents from Bethlehem devoted their lives to revenge, what would it have profited them? They could not bring their beloved children back to life. They could not hurt King Herod by killing his sons or his wife—Herod himself killed two of his sons and his wife. Hatred could only have brought more pain in their own souls. That pain could only be released by love.

Christians should be nice, but niceness does not begin to describe the virtuous life. The word virtue comes from the Latin “virtus”, meaning strength. Loving our enemies is not weakness, but strength. Only the strong can look upon the wrongs done to them and still love.

This strength of forgiveness is exemplified in a recent book by Laura Hillenbrand called Unbroken: A World War II Story of Survival, Resilience, and Redemption. The book recounts the life of Louis Zamperini, an Olympic track star who signed up as an airman during World War II.  His plane crashed in the Pacific and he and a few of his crew mates survived unimaginable hardships on a raft for 47 days. But that was only the beginning of his ordeal, because he was captured by the Japanese and became a prisoner of war.

According to Hillenbrand, less than 1 percent of American POW’s died in Nazi-run camps.  Over 35 percent of American POW’s died in Japanese camps. The level of atrocities committed by the Japanese guards against the American prisoners is almost impossible to comprehend.  It included daily beating with punches, kicks, and sticks.  Bones were repeatedly broken and health care was not given.  Prisoners routinely lost half their body weight because of malnutrition and disease. Besides the beatings and starvation, many guards went out of their way to humiliate the prisoners in every possible manner.

When Zamperini was finally freed at the end of the war, his life spiraled downward with out-of-control drinking and fits of mindless rage.  He often woke up not knowing where he was.  His dreams were haunted night after night by the face of one particular guard who had singled him out for the harshest treatment.  As he gave up hope for a normal life, his one obsession became a plan to return to Japan and kill the hated guard.  But one day he was dragged to a Billy Graham crusade.  At the crusade, he realized that his life could go on if he accepted the forgiveness of God and offered his own forgiveness to those who had so wronged him.  As soon as he forgave his tormentors, his nightmares stopped.  Because Zamperini had the strength to forgive, he quit drinking and starting living a life of service to others.

Has forgiveness been a stumbling block for you? Is there a prayer or technique you employ to forgive your enemies?