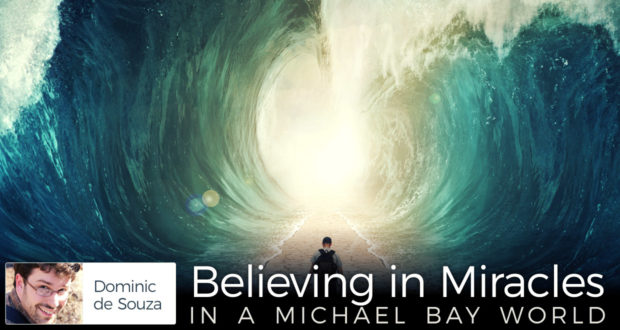 Believing in Miracles in a Michael Bay World

The general sentiment today about miracles runs like this: “If we’d had IMAX cameras throughout history, there would have been fewer miracles.”

“The closer you get to a miracle, the farther it recedes from you.”

So go the objections to miracles, that a majority (if not all) were hallucinations, wishful thinking, or good old tall tales to impress the girls catechumens.

But I contend that people airing those opinions with such dismissive abandon have yet to actually come face to face with two things: 1) the hard evidence of actual miracles and 2) the change in the dynamic of grace in the year of Our Lord.

We live in a ‘Michael Bay’ world, where the highest grossing films are those packed with substance, and starved of style. If you’re happy with that, well… you won’t enjoy it for very long. We can only take so much stuff before it bores us, and we stop believing in it.

I want to show you that we live in an age of transcendence, and we’re focusing too hard on the dirt on the windscreen, rather than on the glory drowning us all around.

The Great Miracles Before Christ

People generally reference popular accounts of miracles, such as the splitting of the Red Sea, the Ten Plagues of Egypt, and other Old Testament events. Films and stories seem evidently comfortable to tell of those incidents.

But the closer they get to the New Testament, the number of miracles referenced seems to decline. When we start creating films of the life of Christ the God Man—the greatest Miracle Worker in… Forever—we grudgingly allow for the Multiplication of Loaves, and perhaps the Walking on Water. Perhaps.

Why the reticence? Why the phobia toward miracles? Is it because we have a hard time actually believing that there are any?

It is absolutely true that there are plenty of events that aren’t miraculous, and plenty that seem to be until closer examination shows them to be otherwise. But let’s not paint everything with the same brush, when even non-Catholics are stunned by the overwhelming evidence pointing to even modern day miracles such as the Shroud of Turin, the Tilma of Guadalupe, incorrupt bodies, stigmata and more.

I think that storytellers feel safe in dramatizing the miracles before Christ because they can be happily painted as myths, as fantastical moments that we don’t have to take too seriously.

Well, I dispute that.

“Ok then, where are these earth-shattering moments today? Why doesn’t this kind of thing happen any more?”

Ah. That brings me to my second point.

The Change in the Dynamic of Grace

If you’re nodding your head in agreement at this point, it’s probably because you already accept several key points in what makes a Catholic tick:

You see, before the time of Christ, God the Father interacted more physically, and perhaps with greater-seeming abandon, because He was doing something different then. Then, He was steadily drawing a people out of the patchwork of ancient man with all the pain, shock and wonder of a miner trying to extract a diamond.

Once it was extracted from the coal, He set about ramming home defenses, even using the enemies of the Hebrews as foils for their weakness to galvanize them back into piety. It was utterly crucial back then to build up a people for Himself who could minister at His altar, and be a living example of His presence on Earth to the rest of the nations.

It seems that direct action was required in a world nuanced by more war than politics. One could say it was a child’s world, with religions and philosophies still puerile in development. But after Christ, the difference in the world is as drastic as the difference between night and day.

No longer is God restricting Himself to purifying a single people. Now He is marshalling all nature to Himself, drawing everyone and everything into His plan to bring it all back to life in Him. No longer restricted to a single location on an ancient mountain, sealed in the heart of an ancient, global superpower, His powerful, living presence is incarnated daily by an ever-increasing wealth of priests all over the world.

The God who wanted to live intimately with His people finally delivered on His promise to bring us into a New Jerusalem: Himself. But of course, we aren’t yet in Heaven itself. We are still flawed and fallible, and this universe continues to operate under its own entropic laws, influenced by evil and all the darkness endemic to our own fallen natures.

Even if we never saw any more miracles again, it wouldn’t matter much to those living with the eyes of Faith. This living presence of God, disseminating His own divine life and Spirit through the Sacraments of His beloved Bride, the Church, is sanctifying the world person by person, piece by piece like water slowly saturating a mountain and turning it into a massive diamond.

This is the modern miracle that has awed the saints into silence.

And yet there are miracles. Tons of them, each rigorously tested and re-tested by ecclesiastical panels to ensure that they aren’t quirks of science or tall tales. The more we learn about the process, the more we realize that the Church doesn’t rush to approve anything; in fact, it takes agonizing time checking everything, trying to prove it isn’t.

So where am I going with all this? Just this intriguing point. We’re looking for Michael Bay’s Transformers in an Age of Transcendence.

We’re looking for leaping suns, falling stars, blackened moons, vast upheavals and signs in the sky, when on the grand scheme of things, a single authentic confession is more miraculous than all those.

The miracle of a child being baptized into the Church, going from an innocent baby irreversibly blackened by an ancient Fall, into an heir for Heaven. The miracle of the Holy Eucharist, where we welcome into our bodies the God who spun us out of the web of nothing. The miracle of a conversion, where an inveterate will is softened and turned to love truth.

These are the true marvels of our modern day. But we don’t see them. So we discount them.

Why? Because we’re looking for the Transformers. Rather than cultivating an appreciation for the Age of Marvels we live in, we still have the eyes of children, looking to be impressed with physical displays of power.

Think about it. Children’s stories and films are always simple and superficial. But nuance, complexity and suggestion are the haunts of the mature mind. A people living in an age of Faith such as ours should have those eyes.

But not all of us do (I’m trying!), and so, in His bountiful mercy, God continues to bless us with bleeding Eucharists, levitating priests, bilocating nuns, more incorrupt bodies, unexplained healings, and so on.

“Oh, you’re just trying to make the best of a bad business. You don’t have the evidence, so you’re recasting the situation in a better light.”

Am I? Or am I trying to show you that the realities of the spirit are transcendent to those of the physical? Truth is a greater reality than a tree. Philosophy is a purer thing than a plant. Heaven is a higher form of existence than Havana.

If, in an age when the Mystical Presence of Christ in the Eucharist is the norm, you’re still having a hard time accepting miracles, then you’re looking for the Transformers. Not the transcendence.

And this is the ironic point I leave you with. The vast, epic miracles of the old world, where God moved mountains, blazed bushes and shook the stars, are inferior in quality to the daily miracles of modern day.

The amazing, reality-bending miracles will still be here, thanks to God’s grace. But they’re not conclusive to a closed mind. Even if they hit you in the face, without Faith you’ll never accept them.

And that’s the difference between Michael Bay and St. Michael.

I am a pipe-smoking, sword-wielding, book-loving Catholic author, who loves writing, reading and illustration. I’m a hobbit at heart, but I live in Gondor, and send home stories from the frontlines. I’m married, and work as a graphic designer for Seton Home Study School.  My website is www.catholicauthor.us