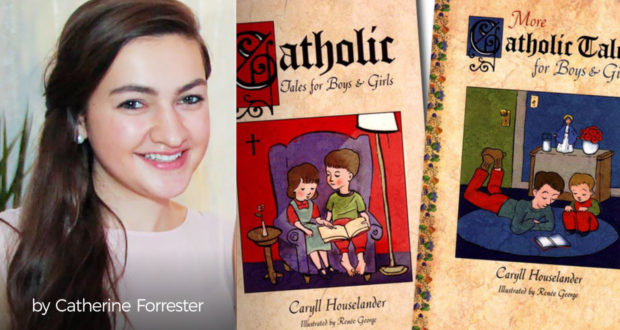 The Catholic Tales for Boys and Girls two-book set contains a variety of Catholic-centered stories which teach good morals using children’s everyday life experiences. It is written from the viewpoint of little children just like yours, allowing your child to relate to the stories.

Even as an adult reading these books, I find myself rewinding back to my childhood, running through the fields with my friend Jane, and learning about God even in the most common of places.

These books focus mostly on children who live in rural areas, but they also take a unique “travel in time and across borders” approach by placing an average child in places like Noah’s Ark or in an orphanage in Japan. This allows for children to absorb culture and history lessons under the guise of novel reading.

Two of my favorite stories from this set are: “The Embroidered Coat,” a tale about two little Japanese orphan girls, Mimosa Mary and Princess Lotus Flower, who find love and gratitude for God in all of the smallest and simplest places on Earth, and “Giving Mr. Oates,” a story about the hope of conversion.

“The Embroidered Coat” teaches three particular lessons. The first lesson it teaches is that we should be grateful for every single thing we have in life and never be ungrateful. Even though the world tells us that Mimosa should be lonely and feel abandoned, she does not. Instead she would say goodnight to the stars and hear them say to her, “Good night, Mimosa. God loves you. Good night.” Mimosa knew, as the nuns said, she was not really an orphan, because she had the most holy of holy parents, God as her Father and Mary as her Mother.

Mimosa drew comfort and holy strength from these insights and thus lived a holy and caring life. She did not envy the Princess who lived in the grand palace next door, but rather loved and cared for her as every human being should.

The second lesson it teaches us is that you should not envy others for what they have, but should care for and love each and every human being. Mimosa heard that Princess Lotus Flower had no one to play with and no one to embroider a special coat for her, so Mimosa volunteered to embroider a very special coat for her. She embroidered a coat which depicted an image with double meaning. The first meaning was that of the story of the birth of Christ. The second meaning was a calling of Lotus Flower to come and play with the orphans at the orphanage.

The third lesson this story teaches us is that when you are grateful for all of God’s gifts, love others unconditionally, and spread the Faith, God will reward you with His holy presence. When the soldiers at the palace discovered that the princess was missing in the orphanage, they vowed to go there and decapitate all of the nuns and orphans and retrieve the princess. However, the Child Jesus appeared before the soldiers amongst the children as a little King, and the soldiers all bowed and “fell on one knee.”

Because of the children’s loyalty and love to Jesus Christ, He saved them from a great peril.

“Giving Mr. Oates” is a story about a grumpy old man who runs the candy store in town. Despite his gruff exterior, he is actually a kind person. Rumors that he is a Communist and an atheist have floated around the town for some while, but in fact, he had been dealt a number of blows in his life which just turned him off from religion. An ex-Catholic boy who lost his parents at a young age, he sells candy and other food items in this small Catholic town. A little girl, Kathleen, becomes very fond of Mr. Oates and wants to give a grand gift to God for her first Communion. She thus convinces her friends to help her by praying for his conversion and making the sacrifice of abstaining from eating candy until Mr. Oates converts.

Mr. Oates becomes quite sad because he doesn’t see the children in his candy shop anymore and thinks that they do not like him. Feeling pity, Fr. O’Reilly, the Catholic parish priest, stops by his store to have a chat with him. Discovering Mr. Oates’ depression, he asks the children why they don’t like Mr. Oates anymore.

Upon discovery of their story, Fr. O’Reilly convinces the children to tell Mr. Oates why they haven’t been in his store lately. As soon as Mr. Oates hears this touching tale of how all of the children were willing to give up candy, just to convert him, because they loved him, he converted right away.

This is a touching tale which shows that through genuine love, sacrifice, and prayer, even the coldest of hearts can be melted. It teaches children to pray for non-Catholics, and it teaches them to love and always see the best in others. “Giving Mr. Oates” prepares children not to lose faith, but to become little missionaries for Christ.

These are great readers to add to your child’s bookcase, for bedtime stories or as part of their daily reading routine.

Pick up your copy of the set through SetonBooks.com!

The 4th daughter of 6 children in Front Royal, VA, Catherine’s family converted to Catholicism when she was 12 years old. They have been strong advocates of Catholic homeschooling for over 20 years. A recent graduate of Mary Baldwin College (an all-girls school in southern VA) she has her Bachelors in Asian Studies and Economics. Her experiences with other Catholic homeschooling families changed her and her family’s life forever.