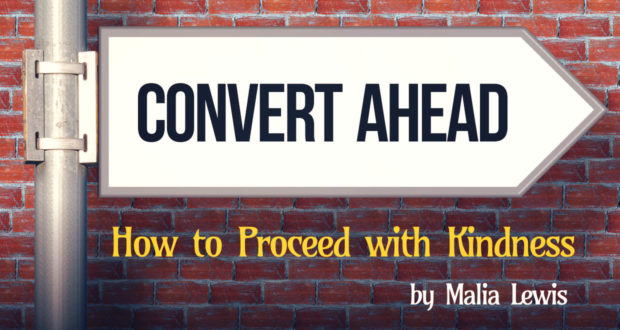 Convert Ahead: How to Proceed with Kindness.

This Easter season, many new Catholics will be entering the church. It wasn’t very long ago that I took that same leap; so, when my husband and I were asked to be sponsors for another couple, I was humbled.

I knew the contemplation that went into asking someone to sponsor your conversion. This is one of the biggest events in someone’s life and they wanted to include me. Wow.

It was interesting to sit through RCIA classes as more of an observer this time around. I heard new questions and concerns from candidates and catechumens. I learned new things about the Church and even learned some things about myself in the process.

(If you have never gone through the RCIA process, please consider at least getting some of the material. Even with all the books I study, I constantly find myself learning new things. It’s not unheard of for someone who was born a Catholic, attended Catholic schools and Catholic college, to say they learned something new in RCIA.)

While we don’t want to segregate ourselves, there are some unique challenges that converts have to overcome. While we are happy to be a part of the universal church, sometimes things happen that make us aware that we are indeed new to the faith.

In those moments, we give each other a knowing glance or speak quietly when everyone else has gone. So what are we talking about?

We often bring our former life with us. Some of us have strong religious backgrounds and that is hard to forget. Some of these things are so ingrained in our lives that they are like breathing. For example, growing up in my Baptist family, spontaneous praying was the norm. You just do it and there’s not much thought put into it.

Memorizing prayers as a Catholic has been tricky for me because I still think “just say what’s on your heart”. Then one day I realized that both forms are still prayers and that’s the point… to pray.

Not only are the memorized prayers good for when words fail me, but I love the feeling of praying together as one. In those moments, I feel a part of the largest family in the world. I am glad that I have found supportive people who accept that my past is a part of me and don’t make me feel as if I have to throw it all away.

Some of us have to leave our former life behind. My conversion process was pretty smooth. I have a lot of Catholics in my family, and we have a pretty good mix of religions, so there was no big fallout. But for some of us, this is not the case.

One convert I know is now estranged from her family and spends lots of time alone. Another has an ex-husband who actually went to court to ask that their children be prohibited from attending Mass. Conversion is a big step and not having support gives many potential converts pause.

Some potential converts even change their mind because the results would be too disastrous for them to handle. Invitations to eat dinner or just get a cup of coffee may be just the thing some need to feel better about their decision.

Holidays are particularly rough for some new to the church so remember them during these times.

We are sometimes overwhelmed with all of it. You can have the best RCIA class in the world, but there is a difference between learning and doing. I joined the church right before the change to the translations in the Mass.

So essentially, I started getting most of it down pat, and then it all changed. I have to admit, it felt good not to be the only one saying the wrong thing sometimes!

There are numerous holidays, feasts, observations, days of obligations and traditions. We don’t do the Alleluia during Lent but we do switch to Latin. Ahh, but some churches always use Latin.

Then there are the debates about the correct placement of hands and how to receive communion. (I am not touching those.) Many of us worry that we are being watched to see if we are doing it right, even though we know that’s not the case.

We forget about days of obligation (or don’t understand them). We forget to bow when approaching the altar. One my friends thought she was bowing to the priest for years, so she would turn to wherever he was sitting or standing. I have been corrected more times than I can count on the pronunciation of words or names.

Be gentle with us. We may find joy in things you take for granted or not understand the excitement of something else. Some of us jump right in and start volunteering, while others may hesitate and take more time to become active.

We are learning to love the Church that many of you have always had in your life. We are finding our place in this huge family and sometimes we just need a little help and patience along the way.

Malia Lewis is a freelance writer, homeschooling mom, Army Brat, and Army wife. She is also a convert to the Catholic Faith who calls Louisiana home, so she jokes that “the Catholicism was just waiting for me to come back.” She sometimes attempts to sew and do other crafts which she blogs about, in between testing new recipes on her family. In the last five years, she has moved four times and has many more moves to go.