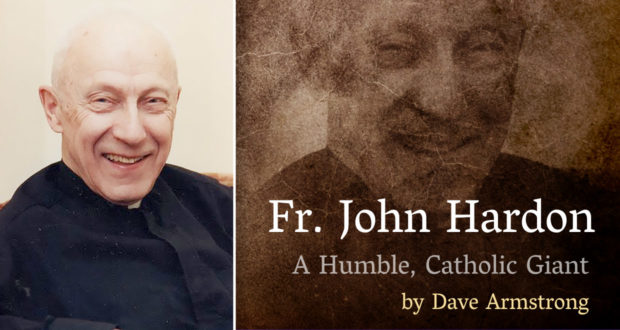 Fr. John A. Hardon (1914-2000) was a holy man. No greater thing can be said about a person. He worked tirelessly for the propagation of the gospel, and was a close associate and adviser of Blessed Pope Paul VI, Pope St. John Paul II, and Blessed Mother Teresa and the Missionaries of Charity.

He had a profound Eucharistic and Marian devotion (he would often – if not always – write his papers and books before Our Lord in the Blessed Eucharist), and focused upon the family, the indissolubility of marriage, the homeschooling movement (including Seton Home Study School), and the pro-life viewpoint in his writings and talks. He was one of the leading catechists in the world, and highly influenced the Catechism of the Catholic Church.

Because of his extraordinary insight and wisdom, listening to him teach felt like being in the presence of an Apostle. I had the honor of knowing him personally. Meeting him proved to be a watershed event in my life and that of my family. He helped me to convert in 1990, received me into the Church, and also baptized my first two children. It was a tremendous blessing to be able to attend his informal catechetical classes every week at the University of Detroit.

“To God be all the Glory”

Fr. Hardon was one of the great and persevering orthodox giants of our time, always faithful and obedient to the Church and the Holy Father. In many ways, he might be said to be the “Father of Internet Evangelism,” as he always stressed the use of writing, the modern media, and assertive evangelism. He was fond of saying that it was great to share the Faith one-on-one, but that if a Catholic wrote, then potentially “thousands” of people could benefit from Catholic truths.

He especially encouraged the laity to become more active in the Church and trained Marian and Ignatian catechists at the direct request of the pope. He was instrumental in establishing the annual Call to Holiness conference in Michigan, which is an antidote to the dissident group Call to Action.

The last time I saw him was in 1999 at a conference for Catholic radio, where he was to be given a well-deserved award for lifetime achievement. I knew that he would be very uncomfortable with this because undoubtedly he would regard it as improperly extolling him. When he received the award, his entire “acceptance speech” was essentially as follows: “Thank you very much. To God be all the glory – all the glory.”

Unfortunately, Fr. Hardon endured much completely unnecessary and unjust persecution from within the ranks of his own less orthodox and committed colleagues. We students of his actually observed this on occasion with our own eyes. Father would on rare occasions make veiled, passing references to it, with his characteristically accepting smile – that of a person who well understood God’s higher, often inscrutable purposes of suffering and mortification, and was perfectly willing to joyfully endure it for the sake of souls.

One often comes across such sorrowful experience when reading about the saints, who are willing to suffer even to the extent of joyfully embracing it, for the sake of the redemption of other souls.

Fr. Hardon possessed a thoroughly Catholic intellect of extraordinary power and incisiveness. He had many charming, endearing qualities as a teacher. For example, while lecturing on something going on in the Church, of a scandalous or heterodox nature, when it came time to speak about a particularly controversial aspect of the problem, he would ask for the tape recorder to be shut off until after he finished with the information, and then turned back on.

He joked once – flashing his ingratiating, disarming smile – about the deflating experience of finding one of his books at a used bookstore for a quarter.

When my first child was baptized by Fr. Hardon in 1991, he spent a great deal of time afterward talking to my late father (a lifelong Methodist, but not a particularly observant one), who developed an immediate affection for him. My father told me later, “I like that old guy a lot.” And he would ask about him, out of the blue. This wasn’t indicative of any theological affinity or desire to convert (far from it), but was the result of being shown courtesy and consideration from a true pastor of souls, for whom charity was a way of life: as natural as breathing.

Fr. Hardon lived a life of truly heroic sanctity and service. No one who met him or heard him speak could have easily forgotten the experience, nor his kindly, wise manner. This was the closest I have come in my life to meeting a saint. And indeed, he has been declared a “servant of God”: the first step to potential sainthood.

See the Fr. Hardon Archives for a huge collection of his teaching (both writing and audio/visual).