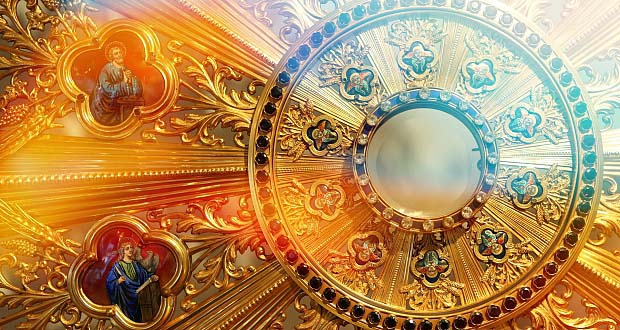 A Seton mother once mentioned a terrible problem her daughter was having with scruples regarding the Eucharist. Obviously, no one is actually worthy of such an intimate participation in the life of God, but this young lady stopped receiving Communion completely, in the mistaken belief that she was committing sacrilege by receiving in a state of venial sin.

In effect, a sin of pride is involved in scruples; in a strange bit of spiritual legerdemain, scrupulous souls may actually consider their sins to be of an order much more horrible than any other sins in the history of the world. They consider their sins so magnificently vile that even God can do nothing about them!

Being in the State of Grace

No one can ever be absolutely certain of being in the state of grace, but we can make a fairly educated guess at it and receive the Eucharist with the reservation that we really do intend to make a worthy Communion. Beyond this, we simply must commit ourselves to the Providence of God and practice the virtue of hope. In any event, Jesus Himself did make the matter emphatically clear: we do not have life in us without the Eucharist. Acting contrary to His direct command would not seem to be a wise course of action. But there are factors involved even beyond the health of the individual soul.

The Eucharist is not simply an individual’s contact with the Body and Blood of Christ. The Eucharist is normally received in an act of corporate worship, the Mass. In the context of the Mass, it is clear that each individual reception of Communion has an effect upon the entire Mystical Body of Christ, the Church. A spiritually prepared Catholic in the state of Sanctifying Grace is commanded to receive Communion to benefit the whole Church.

We must have food to maintain health in our physical bodies. When we eat a steak or a salad, we digest that food, extracting protein, vitamins and minerals from it. These elements are incorporated into the body; they become a part of us and contribute to our good physical health.

Now, here is a nifty bit of theology from the early Church Fathers: in that fascinating spiritual realm that G.K. Chesterton termed “topsy-turvydom,” food operates a bit differently than in the physical world. The Eucharist actually is a food that digests us! We don’t assimilate the Body of Christ; it is the Body of Christ which assimilates us and joins us more intimately to the Mystical Body! We are “digested” a bit more each time we receive Communion. Provided we are in the state of grace, a healthy spiritual process occurs by which we contribute a sort of spiritual vitamin or mineral for the well-being of the entire Body.

Just as a steak is transformed to become beneficial protein for our bodies, so too with each Communion we are transfigured to become more life-enhancing for the Church. We become steadily healthier cells in the Mystical Body. A refusal to receive Communion worthily is depriving the whole Church of the opportunity to grow a bit healthier and holier; it is in fact rather uncharitable to refuse the benefits of your Eucharistic participation to your fellow Catholics!

A scrupulous Catholic is likely to take very seriously (a bit TOO seriously!) the commands of the Faith. Jesus made it clear that, unless a believer partakes of His Body and Blood, there is no life. Anyone having difficulty with that command must consult with a good priest and agree to comply with that priest’s direction. This necessarily entails the realization that there is no sin lying beyond God’s power to forgive; the pride involved in scrupulosity must be eradicated. The good of the scrupulous soul, the health of the entire Church, and the dictates of charity demand that scrupulosity be resolved as quickly and as thoroughly as possible.

Clearly, there are occasions when the reception of the Eucharist does actual damage to the Mystical Body. Pro-abortion Catholic politicians, for instance, attempt to live in two incompatible ends of a spectrum; they run neither hot nor cold. By receiving Communion, they may be introducing into the Mystical Body something akin to spiritual cancer cells or some deadly spiritual bacterium. Such unpromising lukewarm material may very well cause a bit of divine indigestion. But laxity is another story altogether…

What occasion brought you most closely to the entire Mystical Body of Christ?