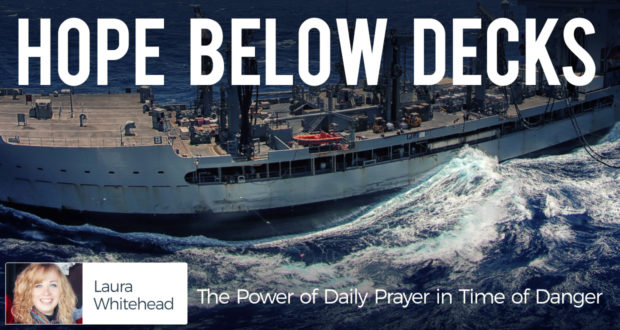 Hope Below Decks: The Power of Daily Prayer in Time of Danger

My grandfather was a member of what has aptly been called “The Greatest Generation.” Before he graduated high school, he was drafted in to the United States Army and soon found himself halfway across the world in Japan and Korea. He made two trips overseas, the first at the end of World War II and the second soon after, during the Korean War.

His stories from his time in the Army fascinated me, and he was always as eager to share his stories as I was to listen to them.

One particular story that he told many times and made a deep impression on me was about his journey back to the States. On a large ship carrying hundreds of troops home, my grandpa was the sergeant in charge of D deck, the fourth deck below sea level.

Partway home, the ship encountered a massive hurricane, or a typhoon, as it is called in the northwest Pacific. The ship was caught in the middle of this horrendous storm, and many on board feared for their lives. As the ship was tossed about by the storm, the men had to use their bed sheets to tie themselves in their bunks to keep from falling. They were shut up, four levels below water, in darkness. The only light came from a small red light above the door.

My grandpa was responsible for this entire deck of men and knew that if the ship went down, all the decks above him would be evacuated first. Strapped to his bunk in almost complete darkness, being tossed about by the raging storm, my grandfather wondered if he would make it home safely. As the storm raged on, a soldier from Detroit crawled across the floor to my grandpa’s bunk and asked, “What are we going to do if this ship goes down?”

My grandpa responded, “I am going to keep doing the same thing I’m doing right now: praying. I suggest you get on it too.”

The picture my grandpa painted for me is still clear in my mind: A young man, being violently tossed about in the dark, strapped to his bunk, fearing for his life, clinging tightly to his rosary, yet calmly and quietly offering the prayers his mother and the sisters at school had taught him, knowing that prayer to God was his only hope of arriving safely home.

The Habit of Prayer

Years later, I was privileged to witness this image again, this time in person. I saw my grandfather confined to his bed, being tossed about by pain and sadness, as he endured the last violent storm on the journey to his heavenly home. As he lay in his bed, with his family all gathered around him, his words to us echoed his advice to the young man from Detroit: “Pray, pray, pray.”

In his pain, misery, and seeming unconsciousness, he would muster enough strength to utter the words “pray, pray, pray,” knowing again that prayer to God was his only hope of arriving safely home. And so pray we did, until with a smile on his face, my grandpa did indeed arrive safely home.

Though these bookend images of my grandfather’s life are excellent examples of the need for and power of prayer, their significance lies in their context of a whole life of prayer, something to which each and every person is called.

A habit of daily prayer prepares a soul for trials and difficulties, just as my grandfather’s habit of daily prayer prepared him for the trials of his life. I imagine my grandfather lying in the dark ship, reciting over and over the prayers that he had learned as a child. The prayers and the faith that were instilled in him as a child did not leave him when he became an adult, but led him through the tumultuous storms of life.

His experience with the typhoon and his stories about it later illustrated the faith he had in the power of prayer. He would always end the story with a statement such as this: “I was praying awfully hard. I think that is what kept the ship from going down.”

This faith was consistent throughout his life, as he attended daily Mass and prayed the Rosary daily. As he grew older, and could not do his usual activities, he turned ever more to prayer. I remember well his “prayer folder,” full of prayer cards and other sheets of paper with the prayers he wanted to say each day. This folder would accompany him to doctor appointments, family events, hospital stays, and long car rides. Everyone in the family knew the importance of Grandpa’s prayer folder, and would make sure he never left it behind.

As Soldiers on a Sinking Ship

As the prayer folder traveled with my grandpa, so an attitude of prayer can travel throughout our daily lives. The Book of Thessalonians 5:17 tells us to “Pray without ceasing.” In difficult circumstances, prayer is easy to remember, but often the intensity or focus wanes as the tasks of everyday life take priority.

The images of my grandfather praying beautifully illustrate the power of prayer in dire circumstances, but hold a great lesson for a life of daily prayer as well. Often as a result of busy lives, prayers are muttered quickly as one crashes into bed at night or are reduced to a quick request for help as one rushes from one event to another.

The focus, intensity, and trust of a young man on a sinking ship should characterize our daily prayers as well. Even though the fact is often forgotten in the hubbub of busy life, at every moment we are as equally dependent on God as a young soldier on a sinking ship.

The power of prayer is often vastly underestimated. Though my grandfather was in a helpless situation on that ship, and turned to prayer, the best and only help he had in that dire situation, he was just as helpless throughout his entire life. In the same way, each person is completely dependent on God throughout every moment of life.

At this very moment, we are all in as much desperate need for the help of God as the men were on that ship during that raging storm.

As we are constantly pulled in a thousand directions with busy schedules and many responsibilities, let us not lose sight of the power of prayer. We know our prayers to God can overcome any trial, difficulty, or busy schedule. As we ask for God’s guidance daily, we can live our lives trusting that at the end of this stormy journey of life, we too will be brought safely home.