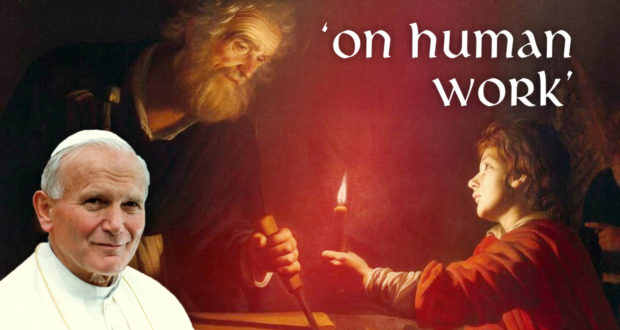 In the continuing glow of the canonization ceremony of St. John Paul II on April 27th, it would be helpful to explore some of his written words and see where they can be helpful in our daily lessons with our children and students.

During his long pontificate, John Paul wrote fourteen encyclical letters and though at times the writing is very dense, this should not intimidate us from using his material as we teach our young people about the beauty and truths of our Catholic faith.

My goal is to write a short article on each of the fourteen encyclical letters and try to offer three or four main lessons that we can use in our teaching and our own prayerful reflection. I plan to discuss these lessons with our Confirmation candidates in our home parish. I would like to continue this reflection with John Paul II’s third encyclical letter Laborem Exercens (On Human Work) which was promulgated in November 1980.

George Weigel, in his skillful biography of John Paul II Witness to Hope, states that this encyclical is the most personal of all John Paul II’s encyclicals because he brought his own distinctive experience as a manual laborer to bear in analyzing the moral meaning of human labor (WTH 420).

Lesson #1 Work is a Good

Modern man has tended to make work become a form of drudgery that people go to every morning and do their best to avoid and when possible even avoid all-together. In the United States, an ever-growing federal government has, even at times, rewarded those that do not work. Even though our children see good examples at home that reject this highly materialistic concept of work, they are not immune from the cultural forces that make human labor into an onerous task.

John Paul unequivocally rejects this materialistic notion of work. The Pope states in the opening paragraph of his encyclical that work is one of the characteristics that distinguish man from the rest of creatures. Work bears a particular mark of man and of humanity, the mark of a person operating within the community of persons (LE Intro).

The Pope reflects that Jesus Christ for most of the years of his life on earth performed manual work at the carpenter’s bench. The Pope explains that this is the most eloquent expression of the “Gospel of work.” The value of work is not primarily the kind of work being done but the fact that the one who is doing it is a person (LE 6). The Pope is emphatic throughout the encyclical that the primary basis of the value of work is man himself, who is its subject and never its object (LE 6).

In the course of their studies, our students and children will at times become tired of learning, and getting them into learning mode day in and day out can be a challenge. It is at these moments we must challenge ourselves to reflect on the value we place on human work and ask ourselves if we see the good in daily work.

If children perceive that work is drudgery for their parents, it becomes infinitely more difficult to engage them in the learning process. However, if work is seen as a good and something that was not foreign even to our Savior Jesus Christ, the potential for incredible learning and schooling now becomes present. Learning and studying in essence helps make us more and more the people that Christ is calling us to be.

The Pope completes this section on work being a good worker by citing St Thomas Aquinas and Aquinas’ view that work is not only good in that it is something useful or to enjoy, but that work is also good as being something worthy, something that corresponds with man’s dignity that expresses this dignity and increases it. In his personalistic prose, John Paul states that through his work man not only transforms nature but also achieves fulfillment as a human being and indeed in a sense becomes more of a human being (LE 9).

Lesson #2 There is an Order to Creation

One of the errors of modern philosophy is a wholesale rejection of a priority in creation. All of creation is good because it was made by our Almighty Father, but only human beings were made in the image and likeness of God. This is a fundamental theological point that John Paul makes throughout this encyclical.

Man is the master of the creatures placed at his disposal in the visible world. Man is the image of God partly through the mandate received from his Creator, to subdue, to dominate, the earth. In carrying out this mandate, every human being reflects the very action of the Creator of the universe (LE 4).

Modern culture has attempted to place human beings under the microscope of the created order. Philosophical errors that reject the Almighty are inherently destructive to a proper Christian humanism. If a philosophy has a faulty starting point about its view of man, it will also have a faulty understanding of the God who created man in his image and likeness.

The point to discuss and teach our young people is that it is not only critical to have a proper understanding of the role of the Almighty in creation, but also the priority given to human beings created in the image and likeness of God. “By the subjection of all things to man, the name of God would be wonderful in all the earth” (LE 25).

John Paul states that through his work man shares in the activity of the Creator. The very first chapter of Genesis is the first “Gospel of work.” It teaches that man ought to imitate God, his Creator, in working, because man alone has the unique characteristic of likeness to God (LE 25).

Any philosophical system that places things above human beings or capital over labor is unequivocally rejected by John Paul. In an age of rampant materialism, the definition of success is often made equivalent to what one owns, what one drives, what one wears or even what college my son or daughter needs to attend.

The greatest gift we can give to our children is not any material good but rather a heart and mind nurtured in our Catholic Christian faith. The time is now to teach our young people that we should never cede any ground to those who try to demonize Catholic Christians as cold, uncaring or lacking in mercy. At its very core, Christianity preaches the incredible dignity and unfathomable worth of every human being. Our children should never be ashamed to boldly and loudly proclaim this message.

The beauty of the writings of John Paul II is that he profoundly teaches and speaks this language of Christian humanism in an age filled with unimaginable violence against the dignity of the human person.

Lesson #3 – Respecting the Work of the Mother

Almost lost in this theologically rich encyclical letter is John Paul’s call for a social re-evaluation of the role of the mother, the work connected with it and the need children have for care, love and affection in order that they may develop, on every level, into stable persons (LE 19). It has now become common place to have both the father and mother as full-time workers outside the home.

There are some situations in which this may be unavoidable. Yet, how many times is this done simply so children (and mom and dad) may be afforded more material comforts? This is not a homily we hear often on Sundays, as it has become not only socially acceptable for women to work full-time jobs and leave children in day-care, but it has been deemed by society to be necessary for economic survival. There is no denying that living off one salary can be difficult and sometimes almost impossible, yet we need to carefully examine John Paul’s words.

The Pope states that when a woman has to abandon the tasks of caring for the needs of children to take up paid work outside the home, it is wrong from the point of view of the good of society and of the family when it contradicts or hinders the primary goals of the mission of mother (LE 19).

Each of us is called to carefully examine our lives to see where material comforts have taken priority over having mom at home to care for the developmental and spiritual needs of children. This is not a moment for those of us who are able to have mom stay at home full-time to give ourselves a congratulatory pat on the back, but rather ask ourselves how we can assist those in our own parish or community make mom staying at home a reality.

What sacrifices do we make to assist our neighbors so that one parent may be relieved of full-time work duties so that this parent can stay at home to care for children and educate their children?

In a day and age of rampant materialism that places comfort ahead of everything else, we have before us a teachable moment for our children. Material comforts, when not rightly ordered, can poison the soul. The love, time, caring, education and attention to a solid upbringing in our Catholic faith far surpasses the good that can be bought with an additional worker’s salary.

When Jesus chased out the money handlers, He was not condemning money or material goods, but rather was teaching about the right ordering of their use. The changing of foreign money into the shekel had become an opportunity for the money changers and Temple priests to fleece poor Jewish people who had no recourse from this treatment.

Jesus’ anger was towards the injustice being done to the poor and the powerless. In our own time, money and material comforts can lead one away from a deepening of faith in our Heavenly Father and a callous disregard for our brothers and sisters. Material comforts, placed ahead of the spiritual well-being of our children, is modernity’s false ordering of their use.

John Paul concludes with a beautiful reflection on the Cross and human work. It speaks to the depths of man’s very core. It reaffirms the Christian theology of death followed by resurrection.

The Christian finds in human work a small part of the Cross of Christ and accepts it in the same spirit of redemption in which Christ accepted his Cross for us. In work, thanks to the light that penetrates us from the Resurrection of Christ, we always find a glimmer of new life, of the new good, as it were an announcement of “the new heavens and the new earth” in which man and the world participate precisely with through the toil that goes with work (LE 27).

This is the Third in a Series of Lessons for Youth From St. John Paul II’s Encyclicals

See the rest of my series through my author page.