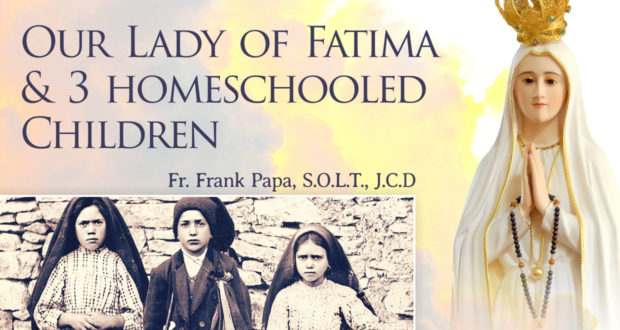 Our Lady of Fatima & 3 Homeschooled Children

On May 13, in the year 1917, the Blessed Virgin Mary appeared to three peasant, home-schooled children: Lucia dos Santos who was 10 years of age and two of her cousins: Francisco Marto, age 9, and his little sister Jacinta, age 7.

Certainly, if our Blessed Mother would select someone to favor with an apparition, it would be someone as innocent as a child. And if she wished to impart a message to the whole world, that person, or persons, would have to be capable of understanding what Our Lady was saying to them.

Educated in the Faith

Many or most of these terms would only be familiar to children who are being instructed in the Catholic Faith. Such instruction is not imparted in public or government schools. It is also quite certain that you would not find a Crucifix or holy picture on the schoolhouse walls. Furthermore, there might be certain administrators and teachers hostile to the Faith.

Yet, even if they were not so disposed, many or most of them would not be educated enough in the Catholic faith to be competent to teach it (you can’t give what you don’t have!).  Thus, children educated under such circumstances, systems, or institutions would not be conditioned to carry on a discussion or dialogue with an Angelic messenger from Heaven, followed by several conversations with the Blessed Virgin Mary!

Imagine how intellectually challenging a visit with angels and the Blessed Mother would be for the average small child—or adult—especially in our own times. The three Fatima children had an advantage, however. They were being homeschooled. Their parents took on the responsibility of educating their children, not only about how to make a living, but also about how to live, how to live a moral life, how to live in both a natural and a supernatural world.

It is certain that the parents of the Fatima children had never heard of the term, ‘homeschool.’ But it was, in fact, a true homeschool.

Mr. Dos Santos, the father of 10 year old Lucia, and Mr. Marto, father of Lucia’s two cousins Francisco and his little sister Jacinta, were, as all home-schooling fathers should be, the principals of their respective schools. They give contemporary homeschooling fathers an example to emulate.

As principals, it is the role of the fathers to provide textbooks for the students. They should provide for the school lunches, extracurricular sports programs and equipment, field trips, arts and crafts materials, musical instruments, and the like. It goes without saying that a principal is the chief disciplinarian of the school. Every principal should be willing to teach at least one subject each semester.

The Fathers of the Fatima Homeschool were doing just that by teaching the children how to make a living, how to be shepherds, how to tend to various animals, grow fruits and vegetables, gather firewood, weatherproof the home and maintain field and farm. In all of this, they were, as modern fathers should be, an example of what it is to be a truly Christian husband and father—faithful and true.

The Mothers, on the other hand, were the primary catechists of their children. Lucia’s mother would, at times, take the opportunity during the evening ‘family gathering’ to catechize her family with stories about our Lord’s passion, the martyrdom of St. John the Baptist, etc., etc. Young Lucia had the ability to re-tell the stories in great detail, so on occasion, Lucia was asked to teach the children what she herself had learned earlier. (However, in her memoirs, Lucia recounted that when she found herself teaching others, there were only a few things she could remember. When she was asked to teach something more, she had to admit that it was all she remembered.)

Nothing should be more important than the upbringing and education of children, particularly in matters of the faith. In order to make a living in this world, it is necessary to have knowledge. It is certainly necessary for the children to read, write and do arithmetic. (In fact, the Blessed Mother directed Lucia to learn how to read). But the Fatima children needed something even more vital in their life; they needed, as all thinking humans do, the gift of Wisdom.

Knowledge could be gained in multiple ways. But wisdom? Wisdom is a gift of God. If anyone sincerely seeks Wisdom, God will give it to him freely and ungrudgingly.

By teaching their children basic truths of the Catholic faith, the parents were unknowingly preparing those three Fatima children to receive a visit from Heaven itself, in the very person of the beautiful Lady of Fatima! She is the Seat of Wisdom! The problem is that Wisdom is Catholic, and God is more willing to give that gift to man, than man is willing to seek or accept it.