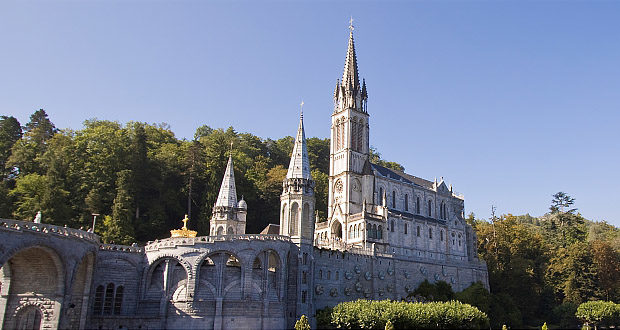 Our Lady of Lourdes: 6 Points to Know

The Virgin Mary’s explicit message to the faithful through Bernadette was to “pray and do penance for the conversion of the world” and to have a chapel built at the site of the apparition so it could be a center of pilgrimage. The Blessed Mother directed Bernadette to dig in the ground and, ultimately, a miraculous spring bubbled up from the ground. Immediately, there were many cures from the water. Eventually, a shrine was built as the Blessed Mother had asked, and miraculous water from the spring has cured thousands of people, some with terminal afflictions.

The apparitions at Lourdes have other, more implicit messages from God to the world–a world that has become increasingly secularized from the nineteenth century to this day. Western societies have increasingly ignored God’s Word and their own foundations in the Judeo-Christian culture. While the science of the conception of a human being was not well understood until the nineteenth century, the Bible, ancient Israel, Jews loyal to the Mosaic Law, and all Christian societies had always implied or explicitly taught that killing an unborn child is a serious sin and crime.  The apparitions to Bernadette came at a time when Christian nations were beginning to accept the pagan practice of abortion while, ironically, science in the nineteenth century was showing that a new and unique human being comes into existence at conception, not at a later time in the mother’s womb.

Several important truths are implicit in Mary’s words identifying herself: “I am the Immaculate Conception”.  These truths include the following:

Other aspects of the apparitions at Lourdes remind the faithful of other important truths:

O Ever Immaculate Virgin, Mother of Mercy, Health of the Sick, Refuge of Sinners, Comforter of the Afflicted, you know our wants, our troubles, our sufferings. Look with mercy on us.

By appearing in the Grotto of Lourdes, Immaculate Mother, you were pleased to make it a privileged sanctuary, from which you dispense your favors. Many sufferers have obtained the cure of their infirmities, both spiritual and corporal. We come, therefore, with complete confidence to implore your maternal intercession. Obtain, O loving Mother, the grant of our requests. Through gratitude for your favors, we will endeavor to imitate your virtues that we may one day share your glory.

Petitions to The Immaculate Conception can be placed online at the Lourdes website. Holy water from Lourdes is available at