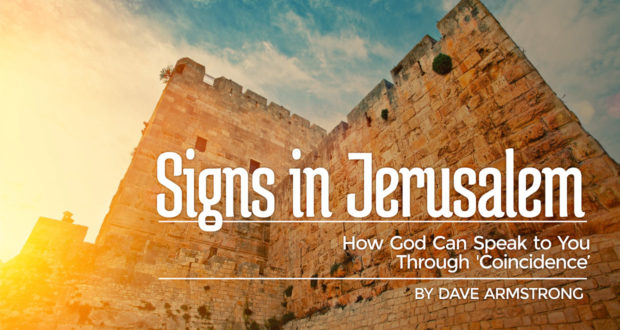 Signs in Jerusalem: How God Can Speak to You Through ‘Coincidence’

John 9:5-7 (RSV) As long as I am in the world, I am the light of the world.” [6] As he said this, he spat on the ground and made clay of the spittle and anointed the man’s eyes with the clay, [7] saying to him, “Go, wash in the pool of Silo’am” (which means Sent). So he went and washed and came back seeing.

I actually visited this holy site in my recent pilgrimage to Israel. It’s located on the south end of the “City of David,” which is the original Jerusalem from King David’s time in 1000 B. C.: just south of the temple mount. In those days, it was a very small city, only about a third of a mile long (apart from the temple area) and as narrow in width as a football field.

I walked most of the length of it, underground, in Hezekiah’s Tunnel: the marvel of engineering, constructed in 700 B. C. to divert the Gihon Spring: the sole water source of Jerusalem, during a siege made by the Assyrians.

Later I hiked alongside the steep, 60-degree cliff on the east side of ancient Jerusalem, down below in the valley of Kidron: walked by Jesus and the disciples after the Last Supper (Jn 18:1), and again by Jesus as He was being led away to His trial. During King Hezekiah’s reign, idolatrous altars were thrown into this valley (2 Chron 30:14).

The exact location of the Pool was not definitively known until as recently as June 2004, when archaeologists Ronny Reich and Eli Shukron identified two ancient stone steps, uncovered during work to repair a water pipe.

It was 225 feet long, and served as a Jewish ritual bath, or mikvah. Jesus expanded upon the notion of ritual purification, to make the pool also a place of miraculous physical healing (just as He did also at the rain-fed Pool of Bethesda, north of the temple mount (see Jn 5:2-9).

I emerged from Hezekiah’s Tunnel in my swimsuit and rubber sandals (the water is almost three feet deep in some places), and met the rest of our party sitting by the side of the Pool. Our guide Meir More (an Orthodox Jew but very respectful of Christianity) was reading the passage above, in the same version (RSV).

When he got to “I am the light of the world,” he said (pointing to the sky), “look what happened right there.” Fellow pilgrim Margie exclaimed: “I saw that! As soon as you said ‘light of the world,’ that happened.” Meir excitedly responded (obviously moved): “Look at that! God is coming out of heaven right now. Isn’t that magnificent?” 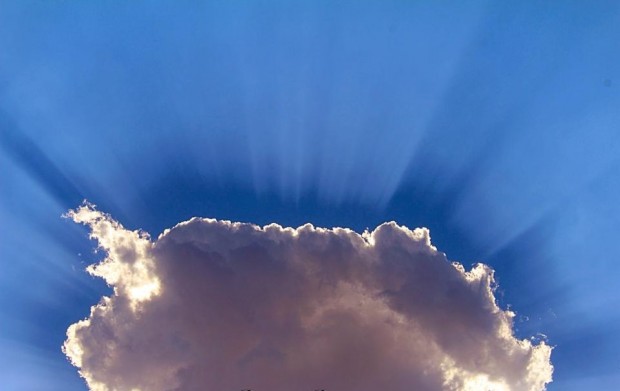 The Sunburst we saw

What we were all looking at in wonder was a spectacular sunburst. We have a video of this whole episode (thus the quotations are word-for-word and totally accurate) and Margie’s great photograph of the sunburst (one of the prettiest and most majestic I’ve ever seen in my life), accompanies this article.

Furthermore, Meir was equally excited in noting that the water was flowing from the Gihon Spring down the steps to the Pool of Siloam, for the first time “ever”: the first time in 2000 years. It had started the day before (so we were told). Moreover, it stopped while we were there.

Interpret this as you will! At the very least it was very bizarre and/or “eery” coincidence. But all of us (including our guide) were astonished at the “double phenomenon.” This was actually the fifth time we had had witnessed a “celestial phenomenon” while on our pilgrimage. We had seen similar sunbursts over Mt. Tabor: the Mount of Transfiguration, and over the area of the Sermon on the Mount, by the Sea of Galilee. We also saw a cloud right on top of Mt. Tabor and a funnel cloud in the air, near Mt. Carmel (the precursor of a tornado).

God often uses physical signs, such as the rainbow to Noah and mankind. This is the Judaeo-Christian worldview. Of course, it may very well have been a mere coincidence, but then again, maybe not.

The God Who numbers every hair on our head and cares for sparrows could have actually given us a lovely sign, or arranged in His providence for the natural event to happen at precisely the right place and time, as we passed by (which is not supernatural per se but is an action of God): simply to bless us. Certainly, He’s done many “stranger” things.

We need to avoid being gullible and going after signs (things that St. Paul and Jesus condemned). But we should also be childlike and open to possibilities of this sort.

Readers interested in a fuller account of my pilgrimage to Israel (along with reports of lots of new, exciting biblical archaeology), may be interested in my latest book, Footsteps That Echo Forever (available at Lulu.com).