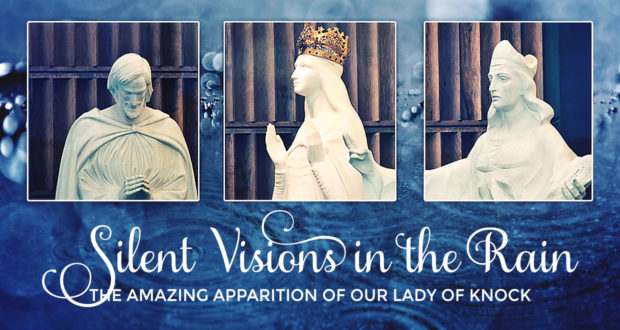 Silent Visions in the Rain: The Amazing Apparition of Our Lady of Knock

Most Marian apparitions provide a message and a miracle. However, Mary did not speak during her visit to Knock, Ireland, in 1879.

Most Marian apparitions provide a message and a miracle.

When Mary visited Mexico in 1531, she came with a request for a chapel and with a miraculous image on St. Juan Diego’s tilma.

Likewise, when Mary visited Fatima in 1917, she had a spoken message (pray for the conversion of Russia, warnings of future war, etc.) and a miracle (the dancing sun vision).

However, Mary did not speak during her visit to Knock, Ireland, in 1879. She left behind no tangible miracle witnessed or examined by skeptics.

And Our Lady was not alone, for St. Joseph and St. John the Evangelist appeared with her, as did an image of a Lamb on an altar.

What could be the reason for the discrepancies of this vision? Ireland’s history prior to the apparition provides a possible answer.

The “Curse of Cromwell”

Ireland had gone through radical social and spiritual upheaval, starting in the 1500s. Though many of the native Irishmen had remained Catholic despite pressure and persecution from Protestant English landowners and nobles, the Faith remained in jeopardy.

The “Curse of Cromwell,” named after Oliver Cromwell’s anti-Catholic invasion of Ireland in the mid-1600s, plagued Ireland throughout the 17th, 18th, and 19th centuries. Few Irish owned land; most property remained in English landowners’ hands.

Anti-Catholic laws at their best merely banned priests from saying Mass (leading many priests to say Mass at the “Mass rocks” scattered throughout the Irish countryside) and at their worst condemned Catholic priests to death.

On a temporal, social level, inaccessibility to meat and other foods (much of which had been taken from Irish farmers as payment for harsh taxes) led to severe famines, the worst occurring in 1846–1847.

These famines, caused in part by a fungal infection which killed off much of the Irish potato crop, transformed the country. Some soup kitchens were set up to feed starving Irishmen, though these kitchens had a condition: attend a Protestant service before receiving food.

England, worried about the safety of the Anglo-Irish landowners, sent soldiers to put down any riots or uprisings. Millions of Irishmen fled to America and other places of refuge; starvation and emigration caused Ireland’s population to drop drastically.

The western portion of Ireland, where many Irish were relocated during the conquest of Cromwell, suffered the most.

It was there, in the small town of Knock in County Mayo, that Our Lady appeared.

Silent Statues in the Evening

The evening of August 21, 1879, saw rain pouring onto Knock. Ireland in the 1870s had been rocked by fighting between landlords and tenants. County Mayo was no exception.

Even everyday people were affected by legal battles ensuing in England’s Parliament. Most, however, simply wanted to live their lives in peace.

Mary Byrne, twenty-nine years old, lived with her small family in Knock. Around 8 pm on August 21, she was walking the parish priest’s housekeeper home from the Byrne family house.

The housekeeper had seen, on her way to the Byrne house, what looked like statues standing against the south side of the church, lit from behind by a faint glow. The housekeeper had thought that they were new statues for the parish, and had walked onward without giving the images another thought.

On the way back, however, both women saw the figures clearly, and went closer to investigate. Mary Byrne later described the figures as “life-size,” with St. John and St. Joseph smaller than Mary, who wore a crown and cloak. St. Joseph stood, grayed, old, but not weak.

St. John stood, dressed as a priest prepared for Mass, one hand held in blessing, the other holding a book. A Lamb on an altar stood behind the figures. All three figures floated above the ground and away from the church’s wall. The rain fell on the visionaries but not on the figures themselves nor on the wall.

None of the figures spoke or moved.

The visionaries did not want to keep this vision a secret. Mary Byrne ran and retrieved her family. The apparition was still there. Her siblings ran to tell other townsfolk. In all, eighteen people knelt at the church wall, all seeing the vision.

An hour went by. The figures in the vision did not speak. When some of the visionaries tried to touch the figures, the figures moved away from the people, just out of reach.

After the hour passed, some of the witnesses went home, their hearts moved. After another hour, the remaining witnesses left to pray with a sick neighbor. The vision was over when they returned.

There was not a lot of support from the local Irish bishops for the eighteen visionaries (the parish’s holy pastor, however, gave them his full support). The diocesan investigation by the Diocese of Tuam was hostile from the start.

They interviewed the witnesses once, and determined that the visiionaries were trustworthy enough (though there were some on the commission who favored the idea that the whole thing was a hoax by a Protestant policeman).

Pilgrims from throughout Ireland flocked to Knock to pray at the church wall. Soon the town gained international attention, and devotion to the apparitions grew. The popes of the 20th century showed support for the vision and the shrine that was eventually built at Knock.

The apparition received approval from the Holy See in 1936. When visiting Ireland in 1979, Pope St. John Paul II visited Knock, giving to the shrine a golden rose.

Today, the old church still stands, a chapel with an artistic representation of the vision extending out from its south wall. The area around the church has been transformed into an elaborate shrine.

A large church, built in the 1970s (and unfortunately suffering from some of the problems in mid-20th century Catholic Church architecture), and a reconciliation and adoration chapel stand as places of spiritual cleansing. Millions come and pray at the shrine, meditating on Mary and her profound message.

The Silence of the Irish

But what was her message? Neither she nor her saintly companions spoke on that rainy August night. No great sign flashed in the sky for thousands to see, like at Fatima.

Though there are some claims of miraculous healing from pilgrims, Knock does not boast of grand healing miracles like those seen at Lourdes in France. Besides, at both of those visitations, in fact at all other well-known Marian appearances, she spoke to her children. Why no words to the seers at Knock?

The answer, as many commentators on these visions note, is that Mary’s silence echoes the silence of the Irish in the 1800s.

Through starvation and social oppression, the Catholic people of Ireland clung firmly to their ancestral Faith. During the starving times, prayers streamed heavenward, often said in silence, always welling up from the depths of the human heart.

If anyone knows the plight of those who suffer in silence, it is the Blessed Mother. In this vein, the presence of St. John, St. Joseph, and the Lamb upon the altar makes sense. St. John, though an evangelist, nevertheless remains a quiet figure in the Gospels.

Dressed as a priest, St. John pays tribute to the heroic priests of Ireland’s tumultuous history. St. Joseph utters not a word in the Gospels; he is the silent guardian of Jesus and Mary, as well as the entire Church.

Finally, the Lamb on the altar calls to mind not only the lamb led to the slaughter in Isaiah 53:7, but also the silent but Real Presence of Christ in the Eucharist. So the “silent people” of Ireland received, fittingly enough, a silent visit from their saintly protectors.

Ireland today seems strikingly divorced from the Ireland visited by Our Lady. Fewer Irishmen and women show love and devotion to Our Lady.

It was as if Ireland, once it became its own independent country in the early 20th century, abandoned the Faith which had united it in former times of trial.

Ireland, like much of the world, seems to be turning away from the Church in exchange for secular rewards.

But just as man cannot live on bread alone, so Ireland cannot survive without its Faith. Ireland needs its Catholic heritage.

It needs Our Lady of Knock. 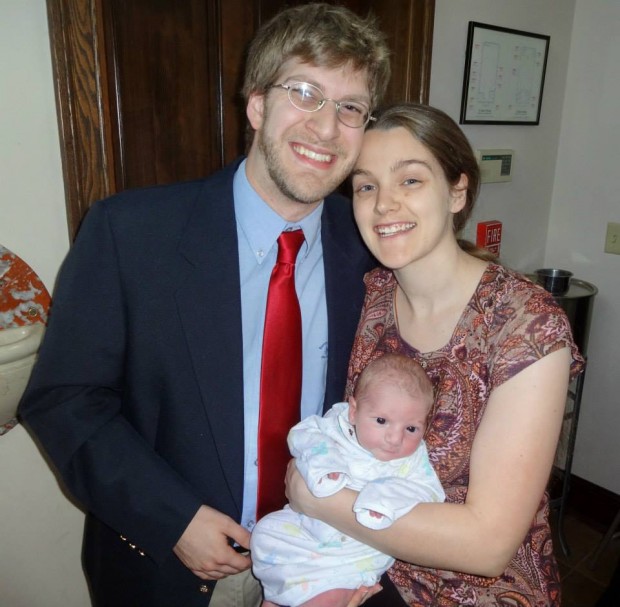 Matthew B. Rose received his BA (History and English) and MA (Systematic Theology) from Christendom College. He teaches Theology and History at Bishop Denis J. O'Connell High School in Arlington, VA. Matthew also runs Quidquid Est, Est!, a Catholic Q & A blog, and is a contributor to various online publications, such as Know, Love, and and Serve www.catholiclane.com. He lives with his wife, Seton editor Sarah Rose, and son Benjamin in Virginia.
cromwell ireland knock matthew rose our lady of knock 2014-09-16
Contributing Writers