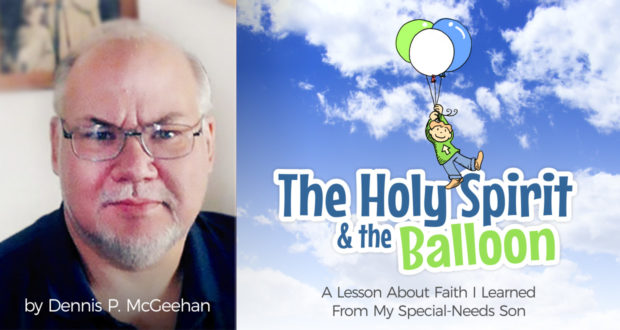 The Holy Spirit & the Balloon: a Lesson About Faith I Learned From My Special-Needs Son

Growing in the Faith can be measured in different ways and, for us, the reception of the Sacraments is high on the list.[endsumary]

My wife and I are the parents of eight wonderful children, currently ages 17 to 29.

The four youngest are all diagnosed as Special Needs, although in many ways, they are the same as their older siblings, each a unique adventure in parenting.

My wife and I take our faith seriously and it is vital for us to pass it onto our children. Growing in the Faith can be measured in different ways and, for us, the reception of the Sacraments is high on the list.

Having eight kids, my wife and I are very familiar with the preparations for Baptism, First Reconciliation, First Communion, and Confirmation.

We could lead the retreats at this point. For the young adults, Confirmation is their goal as it marks the ending of one journey in their life and the beginning of the next. In our diocese this happens in the eleventh grade.

Our familiarity with the process was a source of trepidation for us as our fifth child, Kenneth, prepared for his Confirmation.

Kenneth has Asperger’s Syndrome. He sees the world through different eyes and he has struggled in social situations. In a group setting, Ken would struggle with the give and take of conversation, sometimes changing the topic with apparent randomness.

When he was younger, he would take words literally, which often led to huge misunderstandings. When he first heard the expression, “It’s raining cats and dogs,” he looked outside with horror for fear of the felines and canines crashing to earth.

Ken has made incredible progress, mostly thanks to his mother, who homeschooled him for 10 years. At home, he had the opportunity to make mistakes and learn from them while being taught by a person who loved him more than she loved herself.

That didn’t mean it was easy, however; in fact it never was easy, just always interesting! You see, Ken doesn’t like to ask for help, especially from Mom or Dad.

Ken entered C.C.D. in fifth grade and I ended up being his teacher. I stayed with Ken through 6th, 7th and 8th grades, moving up with him. It was as much for my comfort as his, I admit. In ninth grade, the preparation for Confirmation begins with classes and retreats.

Now, for the first time in his life, Ken had a teacher who was not his parent. This made me a bit nervous but I also recognized it as an opportunity for Ken’s development in independence.

In our diocese, there are mandatory retreats in ninth, tenth and eleventh grade. In ninth and tenth grade, it is expected that the parents will accompany their child, which we did.

There are also Youth Conferences where hundreds of kids attend. Ken attended these with us but we gave him a wide berth so he could be more on his own, although we had a long talk with his Guardian Angel!

Eleventh grade arrived and Ken helped with the service project. Again, I was with him, but I mostly worked on tasks away from him.

Eventually the time arrived when Ken would attend his eleventh grade retreat, this time with his sponsor. Leading up to the day of the retreat, I and my wife did our fair share of worrying but for some reason when the day itself arrived, I was not nervous at all.

I drove Ken to the retreat and told him I would be back that evening to pick him up.

The Confirmation retreat always follows the same schedule; an ice breaker, prayer, a talk, a video, and an art project.

For the art project, the students are broken into groups, and they are told to draw something that illustrates the effect of Confirmation on their lives.

About seven hours after I dropped Ken off, I returned to the school to pick him up. As I pulled up, he hopped in. I waited for him to fasten his seat belt and then pulled away.

We had the usual Father- Teenage Son discussion.

“What did you learn?”

I bit my tongue. His teachers from ninth and tenth grade had commented to us how well Ken knew his faith. Way to go, Mom!

She did Religion with him five days a week. Ken’s eleventh grade teacher also had reported that he was doing well in class. Taking a deep breath, I asked a question I knew the answer to.

“Did you make a poster?”

He replied, “Oh yeah, it was kind of cool. We worked together as a team to draw a poster.”

Then, I asked, “And what did you suggest for the poster?”

“Well, we had to show how the Holy Spirit helps our faith.”

I let out a soft sigh of relief. At least Ken understood the idea of the Holy Spirit.

“Well, what did you draw for the Holy Spirit?” I inquired, feeling reassured.

My reassurance disappeared. For a moment, my mind played a deluge of Cats and Dogs.

I asked in as calm a voice as I could muster, “How does a balloon represent the Holy Spirit?”

I admit his answer surprised me, “That’s neat Ken; I never thought of it that way before.”

“But there’s more. You see, the bigger your balloon gets, the more Satan wants to pop your balloon. The Holy Spirit helps keep him from popping your balloon.”

I was stunned and all I could say was, “I think you really got it, Ken, I really do.”

I couldn’t stop smiling all the way home.