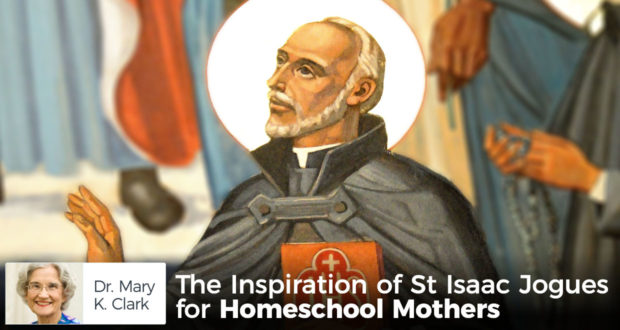 The Inspiration of St Isaac Jogues for Homeschool Mothers

St. Isaac Jogues is one of several Jesuit priests and missionaries from France who gave their lives as martyrs in the 1600s to further the dangerous work of bringing the Catholic Faith to the American Indian tribes in North America. He was born in 1607 and was home schooled by his parents until he entered the Jesuit seminary.

At his own request, he was assigned in 1636 to the Jesuit Mission in Quebec, French Canada, to convert and teach the Huron Indians. Father Jogues worked at the mission for six years, during which time he was known for his long hours of prayer and his love for the children. The Hurons happily accepted the Catholic Faith and many were baptized.

When there was an attack by the Mohawks (one of the five tribes in the Iroquois Confederacy) on the Huron Mission, many were killed, but others, including Father Jogues, were taken captive. The Mohawks took their prisoners south of Quebec into what is now New York.

Father Jogues was tortured repeatedly for about a year, but in spite of his terrible sufferings, he continued to teach the Faith to the captured Hurons, and even taught some of the Mohawk children. Amazingly, he still continued to pray regularly and at length. While he was a prisoner, there were several conversions.

Father Jogues finally was rescued by a group of Dutch settlers living in the New York area. After a short recovery in France, Father Jogues asked to return to the mission in Quebec. His superiors reluctantly gave permission, and in 1646, Father returned to the mission but was killed shortly thereafter.

Why was Father Jogues so anxious to go back to the American Indian missions after his terrible experiences? Could it be that in spite of his sufferings, he knew he was reaching the hearts of the American Indian children and some of their parents? Perhaps he went back to keep alive in their hearts what he had taught them about Jesus. Perhaps Father Jogues remembered the happy faces of those children, the light of understanding and love for Jesus in their eyes.

In a letter to his Jesuit superiors, Father Jogues wrote:

“Let not regard for us prevent you from doing that which is to the glory of God. The design of the Iroquois as far as I can see, is to take, if they can, all the Hurons; and having put to death the most considerable ones and a good part of the others, to make one nation of these poor people. . . . I become more and more resolved to dwell here as long as it shall please Our Lord, and not to go away even though an opportunity should present itself. My presence consoles the French, the Hurons and the Algonquins. I have baptized more than sixty persons, several of whom have arrived in Heaven. That is my single consolation. . .”

Father Isaac Jogues’ message to us homeschool mothers is that we must be faithful to our duty to our children, faithful to those inside our homes while the attacks come from without. We need to remember that no matter what the sacrifices asked of us, no matter how great the problems or the frustrations, what we are giving our children is Love Himself, Jesus Christ along with His mother Mary.

The experience of St. Isaac Jogues reflects the conflict we see today between Christians and the secular culture, which works constantly to vanquish Christians with anti-Christian rules and regulations. The secularists have “captured” the public schools which consistently teach secular values, practices, and ideas.

When our children complain about their “sufferings” in doing math problems or answering science questions, they should be reminded of the sacrifices that others have made for our freedom and for our Catholic Faith. The story of St. Isaac Jogues should be told to our children, who need to be reminded that being ignorant of the Faith, and being ignorant of those who suffered for our religious freedom, will lead to domination by those who hate the Catholic Faith.

Our children need reminding that they are soldiers of Christ, and that this is not a philosophical expression. They will be asked to “fight” for their Faith in many different ways. Are they willing to risk their lives, their reputation, their future?

America will never return to the Christian nation it once was or is meant to be unless Catholics are willing, again and again, with each generation, to study our Faith, to live our Faith in prayer and sacrifice day in and day out, and also to share our Faith with that same joy that motivated the missionaries, whose ‘consolation’ it was to bring souls to Christ.

St. Isaac Jogues, you who taught the Catholic Faith, and who were pleased to suffer and die for the conversion of the American Indians, please pray for us Catholics in America to be brave missionaries for our Catholic Faith.