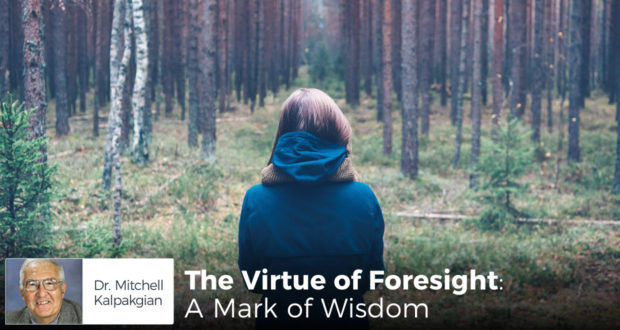 The Virtue of Foresight: A Mark of Wisdom

The ancient philosophers identified man’s capacity for thought by the use of different words for perceiving reality: sensus (the five senses), imaginatio (the ability of the mind to recall pictures from the past or paint pictures of the future), ratio (the ability to think in logical steps to reach a conclusion), and intellectus (the ability to perceive the truth all at once as self-evident).

While animals have instincts as a form of knowledge, they do not reflect on the past or ponder the future with the capacity to think that distinguishes human virtues such as foresight and prudence, a mark of wisdom.

While ants prepare for the winter, they do not contemplate eternity. While dogs have keen memories, they do not gather wisdom from the accumulated experience of the entire human race as a source of universal truth.

Because man is a rational animal with the power of intelligence, human thinking goes beyond the immediate concerns and duties of the present moment.

Man’s memory allows him to recall the mistakes of the past and not repeat them and to learn from the previous experience of older generations in his study of history. Man’s imagination allows him to project into the future and consider possibilities, consequences, and likely outcomes.

The art of living requires this capacity to think today while mindful of the past and conscious of the future. This wise thinking, however, is not escaping into the past with nostalgia or calculating about the future with cunning. The foresight of a wise man is a far cry from the reckoning of a fox or rat.

Foresight does not mean simply being insured for accidents to protect against harm to a person’s health or damage to his home. While home and car insurance show prudential judgment, foresight is more than prevention or precaution.

It goes beyond not taking foolish chances but rather embraces noble efforts and daring initiatives to achieve an ideal. It encompasses the common good, the welfare of future generations, the happiness of all family members young and old, and an awareness of the four last things: death, the final judgment, heaven, and hell.

Foresight strives for excellence and imagines always the difference between the way things are in the present and the way things ought to be in the future.

Famous characters in literature like Don Quixote seek to restore the best of the past—the virtues of knighthood—to inspire future generations with truth, honor, chivalry, and courtesy.

Robert Browning writes that “man’s reach should exceed his grasp,/Or else what’s a heaven for?”

Foresight always aspires to perfection and never rests complacent with mediocrity, the lowest common denominator, or the average.

Just as God in His Divine Providence foresees man’s needs and plans for them, man too needs to be provident—to be far-seeing, to think ahead, to be mindful of consequences, and to realize that the outcome of the future depends on the choices of today. Created in God’s image, man imitates God by providing for others and acting with prudence about the future with the virtue of foresight.

For example, God’s all-wise plan for life—envisioning a child’s needs—prepares for the birth of the newborn by endowing man and woman with parental instincts to care for and protect the infant.

All good parents are provident as they attend not only to the present needs of their children but also think ahead for their future.

The word “pro-vide” comes from two Latin words that mean to look before or ahead. To be Godlike, to be wise, to be prudent, and to exercise common sense means to weigh consequences and be aware of both the present and the future. All actions bear fruit for good or for ill.

As the parable of the talents illustrates, God expects the coins to be multiplied and earn interest—evidence of foresight and imagining the future with good judgment. God judges man by the abundance of his harvest: “By their fruits you shall know them.”

There is no interest earned, no bountiful harvest, no fruitful field without foresight, without sowing the right seeds in the springtime of life for the later years.

Unlike animals that live in the present and do not foresee the future with vision or ideals, man enjoys a greater awareness of time as he recollects the past and anticipates the future.

In fact, the cardinal virtue of prudence takes account of past, present, and future—learning from the mistakes and experience of the past, making a practical judgment based on the reality of the present, and foreseeing the consequences of actions today that affect others for the common good in the days ahead.

To be responsible, moral, and sensible, a person naturally thinks ahead—living today but anticipating tomorrow, saving money now for next year’s purchases, educating children in their youth for their later adult life, keeping the Ten Commandments and living the life of the Beatitudes in the expectation of life everlasting.

Foresight for the Future

Christ taught his followers to be both “gentle as doves and wise as serpents.” The serpent looks to the left and to the right, moves slowly and cautiously, and checks for dangers and enemies.

Thinking must always precede acting; otherwise, a person acts foolishly or imprudently without weighing the effects or reactions beforehand. Without foresight a person wastes money, time, or effort and accomplishes nothing.

Without foresight—an intelligent plan of action to achieve a moral goal—no one progresses toward a destination. To live only for the present and think “eat, drink, and be merry, for tomorrow we die” does not amount to wisdom because the future always comes.

Man enters the future either prepared or unprepared—like the ants in Aesop’s fable that prepared for winter or the cicada that only sang in the summer and froze in the cold.

Foresight for students means not only preparing for a career through a good education but also gathering wisdom to live well and to enjoy an abundant life. Nothing learned—no matter the subject matter, book, or class—is ever wasted.

Whatever a person learns in science, social studies, religion, or English, he will use in one capacity or another. Not to learn is to show no foresight. If not in his own profession, then in his own personal life a person will be glad he knows, glad he can teach others, glad he possesses an informed mind capable of making intelligent decisions.

A person in high school or college is not just qualifying for a profession but providing for a life of the mind, one of the greatest sources of human happiness because man is designed to love truth, to desire knowledge for its own sake, and ultimately to know God.

It is not only human wisdom to think ahead for the sake of one’s own happiness but also charity to be far-sighted on behalf of the well-being of others.

Just as a Christian is obligated to love others as Christ loves him and forgive others as God forgives him, he also needs to think of others and provide for their future as God provides for the birds of the air and the lilies of the field.