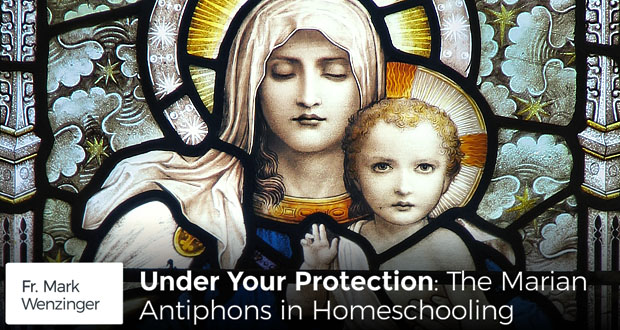 Under Your Protection: The Marian Antiphons in Homeschooling

The month of October is dedicated to the Rosary in a particular way. We traditionally conclude the Rosary with the Salve, Regina, or Hail, Holy Queen, which is the best known of the four Marian antiphons that are recited or sung after Night Prayer in the Roman Liturgy of the Hours.

Did you know, however, that there is a prayer to the Blessed Virgin Mary that is far older than the Salve, Regina, the other Marian antiphons, and the Ave Maria/Hail Mary? This Marian antiphon is also included in the Liturgy of the Hours, and it is a prayer I say many times a day. This short prayer is very easy to learn and to pray many times in the midst of a busy day. It is a wonderful prayer to pray on our rosary beads as a form of vocal prayer that is also simple meditative prayer as well.

This prayer has a wonderful heritage, and is especially appropriate in our own times as a prayer for our Christian brethren in Egypt, northern Africa, and the Middle East who are suffering so profoundly and dying for the sake of Christ. It is beloved by the Salesians of Saint John Bosco, who pray it in their devotion to Mary, Help of Christians.

I would like to introduce and recommend this ancient and beautiful prayer to families as they work to stay on track in the various aspects of family life and homeschool during Mary’s month of October.

In its current form, this antiphon’s first words are Sub tuum praesidium, literally, “Under your protection.”

We flee to your protection (or We take refuge under your protection), oh Holy Mother of God. Despise not our petitions in our necessities, but deliver us always from all dangers, oh glorious and blessed Virgin. Amen.

What a simple and beautiful prayer! As little children, we take refuge in Mary’s outstretched arms, asking her to protect us from enemies visible and invisible and to strengthen us to serve her Son faithfully in great things and small.

Byzantine Rite Catholics will especially appreciate this October prayer to Mary, since October 1 is the feast of the Protecting Veil (Latin: Praesidium1; Slavonic: Pokrov) of Mary, the All Holy Theotokos. Long before Mary defeated the Muslim Turks at Lepanto, she cast her Protecting Veil over the besieged Christians of Constantinople, who were gathered in prayer in her special church during the night Vigil of Sunday, October 1, in the year 911. That night, Mary delivered Constantinople from defeat by the Muslim forces that had afflicted the city for many years.

In its earliest Greek form, this prayer goes back to third-century Egypt, perhaps as far as the period between the years 250 and 280 A.D.! The year 250 A. D. was right in the middle of the brief, but brutal reign of the Roman Emperor Decius (249-251), when the torture, execution and enslavement of Egyptian Christians in great numbers had begun in earnest.

The starting point of the Coptic Church calendar, the Year of the Martyrs, is 284 A. D., when the Roman Emperor Diocletian assumed the throne and began an intensive persecution of the Egyptian Christians, many thousands of whom were tortured, killed, or enslaved. The Sub tuum praesidium thus emerged from the experience of the greatest possible danger and suffering. How fitting it is, then, that we have recourse to Mary through this prayer in the midst of our lesser struggles.

In this earliest Greek form of the prayer, we have a witness to Mary’s title of Theotokos (Latin: Dei Genetrix) or God-Bearer from as early as one hundred and eighty years before the Council of Ephesus (431 A. D.). We also have very early witness to Christian faith in her role as Our Mother of Mercy. Moreover, we also have a very early witness to Christian faith both in Mary’s special election by God as the only human being conceived free from the effects of the sin of Adam (uniquely blessed), and in Mary’s perpetual Virginity (uniquely pure).

It is thus easy to see that the Sub Tuum Praesidium is a most powerful expression of our love for and confidence in Mary as the Mother of Mercy given us by Christ. There could be no better short prayer to Our Lady for help to navigate the most difficult challenges of family life and homeschool.

Let us then have recourse to our Mother frequently through these Marian antiphons, not only in October, but throughout the course of our lives!

1: “Forceful war-time assistance given by fresh troops,” who are, for us, Mary herself accompanied by the saints and angels!