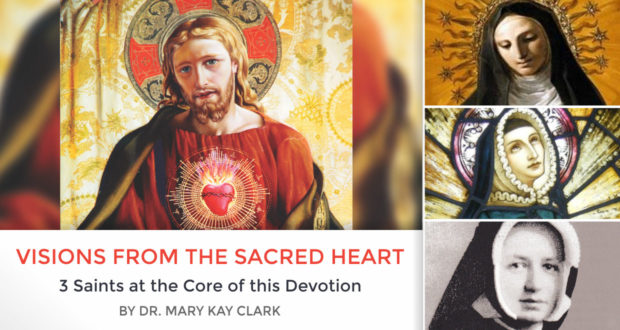 Visions from the Sacred Heart: 3 Saints at the Core of this Devotion

We can read the words of Jesus to St. Margaret Mary on the Divine Mercy website. Jesus requested a feast day in honor of His Sacred Heart to make up for the sins of the world:

“Therefore I ask of you that the first Friday after the octave of Corpus Christi be dedicated as a feast in honor of My Heart, and amends made to It in an Act of Reparation offered to It and by the reception of Holy Communion on that day, to atone for the outrages It has received during the time It has been exposed on the Altars. I promise you that My Heart will open wide and pour forth lavishly the influence of Its Divine Love on all who will render and procure for It this honor.”

Another saint who was devoted to the Sacred Heart was St. Madeleine Sophie Barat, who lived from 1779 to 1865, also in France. She was well aware of the apparitions of St. Margaret Mary only 200 years before in her country.

Madeleine Sophie Barat surely established her Sacred Heart convents and schools because of her knowledge of and devotion to the messages of Jesus about the sufferings and offenses to His Sacred Heart as given to St. Margaret Mary.

Sister Josefa Menendez, who was born only 25 years after St. Madeleine Sophie Barat died, also knew the messages of Jesus concerning devotion to His Sacred Heart. Sister Josefa lived from 1890 to 1923. Though she was born in Spain, she entered a French convent of the Society of the Sacred Heart. Jesus appeared to Sister Josefa frequently, and instructed her to write down every word He gave her.

These messages to the world appear in the book The Way of Divine Love, which received a personal approval from Pope Pius XII.

The messages of Jesus about His Sacred Heart and His love for us, and particularly His messages about His thoughts as He suffered each moment before and during His crucifixion, are life-changing for many of us ready to receive them. If you don’t have time to read the whole book, read only the chapter “The Lent of 1923.”

The following is a sample of the extraordinary words Jesus used to reveal His innermost thoughts.

“Crowned with thorns and clothed in the purple mantle, and amidst overwhelming insults and mockeries, I was brought back by the soldiers to Pilate … O all ye who love Me, consider how I was compared to a thief … or rather valued lower than a degraded criminal, one of the wickedest of men. Hear their cries of rage against Me and their vociferous clamors for My death.

“Far from seeking to escape this affront, I lovingly accepted it for love of souls, for love of you … desirous of showing you that My love was leading Me not only to death, but to contempt, ignominy, and hatred of those very men for whom I should shed My Blood in such profusion. I was treated as a disturber of the peace, as insane, a madman, and I accepted it all with the utmost meekness and humility.

“Do you think that in My human nature I felt no repugnance and grief? I willed to know experientially all that would have to be undergone by you, that you may draw strength from My example for all the circumstances of your life. So I did not free Myself, though that would have been easy, I accepted all lovingly, that thus fortified, you might understand how to sacrifice every repugnance in order to accomplish the holy will of God, My Father … repair His glory, expiate the sins of the world, and win the salvation of many souls.…

“O chosen souls, your happiness and perfection do not lie in following your attraction, nor in living known or unknown to the world, in using or hiding the talents with which you have been endowed, in being thought much of or little, in having good health or not … but only and solely in embracing with love God’s will, and being in perfect conformity with it in all it requires of you for His glory and your holiness.”