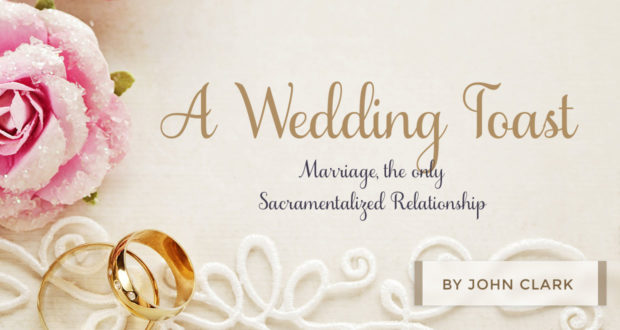 A Wedding Toast: Marriage, the Only Sacramentalized Relationship

This year, Lisa and I attended two weddings. Two of my nieces kicked off the Clark wedding cycle that—considering the gaggle of nieces and nephews—is likely to last for many years to come. I’m glad I attended. They were joyful reminders that marriage is good. Not that I needed a reminder. Lisa and I have a wonderful and happy marriage. But in so many ways in our society, marriage seems to be growing decreasingly joyful. That’s a shame. But maybe it’s also an opportunity for Catholics to re-examine the good of Matrimony. Maybe it’s time to ponder the good of Christian marriage, and offer it a toast.

We should appreciate Christian marriage for many reasons, but perhaps the most obvious one is that God views marriage as a great good. Think for a moment about six of the sacraments: Baptism, Communion, Confirmation, Holy Orders, Anointing of the Sick, and Penance. Each of these six sacraments pertains directly to our relationship with God. And then you have Matrimony. At first, it might seem out of place, yet there it is. Jesus was not required to raise marriage to this level, yet He did. Marriage could have been an institution without being a sacrament, but Jesus made it a sacrament.

Is that a big deal? That is the biggest of big deals. Marriage is the only human relationship that is, or will ever be, sacramentalized. The grace that flows from the sacrament is a powerful assistance to husbands and wives.

It’s uniqueness notwithstanding, Matrimony shares a striking similarity with the other sacraments. As much as marriage involves the relationship of man and wife, it is—like the other sacraments—definitively intended to deepen our relationship with God. More to the point, marriage is about God. It is when people forget this fact that marriages often crumble. As Pope Francis wrote in Evangelii Gaudium, “Marriage now tends to be viewed as a form of mere emotional satisfaction that can be constructed in any way or modified at will”(EG, 66). As Pope Francis suggests, married love, meant to be contracted on Earth as it is in Heaven, seems to have an ever-expanding list of contingencies. But love has no disclaimer.

Marriage must be lived, not according to our own wills, but according to the will of God. That is why a man cannot rationally expect his marriage to be stronger than his faith. They are inseparable realities. In particular instances, it’s often impossible to know what causes a marriage to break down. But we can conclude that, in general, marriages are often lacking what Pope St. John Paul II called the “gift of self.”

As Pope St. John Paul II put it, in his Letter to Families:

“By its very nature, the gift of the person must be lasting and irrevocable. The indissolubility of marriage flows in the first place from the very essence of that gift:  the gift of one person to another person.  This reciprocal giving of self reveals the  spousal nature of love.  In their marital consent, the bride and groom call each other by name: “I… take you… as my wife (as my husband) and I promise to be true to you… for all the days of my life..”

The critics of Christian marriage argue that such permanence is too much to ask, but we know that the giving of self in marriage is designed by God to make us happy. We believe that while living for oneself is an unpleasant pursuit, love is the most fulfilling imitation of our Creator.

None of this is meant to suggest that marriage is always easy; for many people, marriage is extremely trying, to say the least. God confers grace in marriage, but men and women can—and often do—refuse to co-operate with that grace. Even in the best of marriages, we need grace to see us through. Lisa and I have been blessed with a happy marriage, full of children’s laughter.

I sometimes feel guilty that I married Lisa. I feel like I won a marriage lottery and opted for the lifetime payout option. But that doesn’t mean it’s always easy. Like every marriage, ours experienced difficulties that needed to be overcome. We are just blessed that these difficulties made us closer. With the sacramental grace of God, may it be so for brides and grooms everywhere.