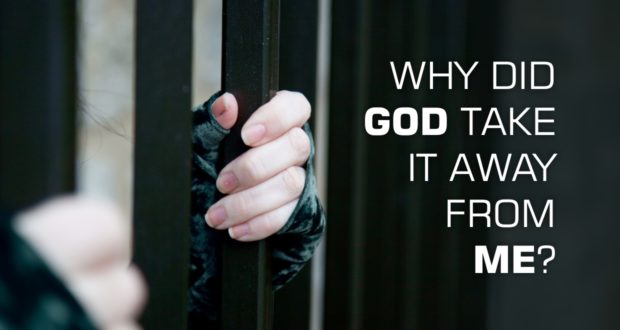 Why did God Take It Away from Me?

Sometimes God allows us to go through seeming seasons of loss in our lives in order to move us into what I call ‘greater gains’.

He removes us from situations which we love, i.e., places, people, jobs, cities, ministries, churches, etc., because if we remain attached to them, they will prevent us from moving forward to those greater things that He has in mind for us.

Sometimes, because we are not aware of the invisible hand of God accomplishing this in our lives, we desperately try to cling to those situations that we love, refusing to be separated from them. God’s Will is to move us to Point B, but because we’ve allowed Point A to become our comfort zone, we resist, clinging all the more tenaciously to it.

In the end, however, God’s strength wins out, we get torn away from that which we love and have grown used to, and then find ourselves wondering why this happened to us. We grow discouraged, confused, disoriented. And then, one day, God moves us into something bigger and better, and we see that His hand was upon us all along. We finally come to understand why He allowed us to be removed from those situations which we loved. We weren’t being “demoted;” we were being “promoted!”

From Pit to Palace

When I think of this scenario, two Biblical characters come to mind: Joseph, son of Jacob, and Moses. Let’s take a look at Joseph.

When Joseph was growing up in his father’s house, he enjoyed “favored son status.” Jacob had a greater love for Joseph than he did for his other children because Joseph was the first son born to him by Rachel, the wife that he truly loved and had chosen for himself.

For a season, things could not have gone any better for Joseph than they were in his early years. Already enjoying the warm and fuzzy feeling of being Daddy’s favorite, Joseph received even greater thrills when Jacob made a richly ornamented robe for him and gave it to him. A gift for Joseph! Nothing for the rest.

As if all of this weren’t enough, God spoke to Joseph not once, but twice, in dreams! As far as Joseph was concerned, he had a great future ahead of him. It was high times for Joseph!

And then, overnight, it was all taken away from him. In a single day, Joseph was stripped of his richly ornamented robe, thrown into a cistern in the desert, sold to a group of Midianite merchants who happened to be traveling in that area, and taken to Egypt, where he was sold as a slave. I don’t think that you and I can possibly imagine what was going through Joseph’s mind during this time.

I don’t think we can imagine the gut-wrenching, heart-breaking turmoil and confusion in which he found himself living day after day. In a single day, he was ripped from everything that he loved. He went from being the favorite son of a great patriarch who was privileged to receive dreams from the Most High to being a lowly slave in Egypt. In the end, however, God raised him up.

Going from the pit to the palace, Joseph eventually became the governor of all Egypt. No one except the Pharaoh was greater than Joseph in Egypt. No one! Not only this, but Joseph was also restored to his father and brothers and used by God to preserve the nation of Israel during a time of severe famine. In the end, he said to his brothers, “You intended to harm me, but God intended it for good to accomplish what is now being done, the saving of many lives.” [Gn 50:20]

Although at the time it looked like he was being “demoted,” in reality, Joseph was being “promoted.”

We see the same situation in the life of Moses. Adopted by the Pharaoh’s daughter, Moses was educated in all the wisdom of the Egyptians. For the first forty years of his life, he lived in the lap of luxury as the adopted son of the Pharaoh’s daughter. Suddenly, overnight, he found himself thrust into a season of loss.

After killing an Egyptian for beating a fellow Hebrew, Moses was forced to flee for his life, for as soon as Pharaoh learned of it, he tried to have Moses killed. For the next 40 years, Moses lived as a lowly shepherd in Midian. Eventually, however, God took him from being the shepherd of his father-in-law’s flocks to being the shepherd of Israel, leading them out of Egyptian bondage to freedom in God.

In both Joseph’s life and Moses’ life, we see a pattern where they went from seeming seasons of loss to greater gains in God.

What goes for these two men goes for us as well. In Saint Paul’s epistle to the Ephesians, he wrote to them as follows: “We are God’s workmanship, created in Christ Jesus to do good works, which God has prepared in advance for us to do.” [Eph 2:10]

You and I were not saved to sit; we were saved to serve. The Catechism of the Catholic Church teaches us that man’s purpose in life is to know God, love God, and serve God. To fulfill our purpose in serving God, each one of us has been assigned in advance certain works in order that Christ may be glorified in our lives and His Kingdom advanced.

Because God has prepared these works for us in advance, this means that we cannot allow ourselves to become complacent and comfortable in our present situations, for at any time, God may uproot us from them and plant us elsewhere. Priests and religious understand that at any time, they can be reassigned and moved to a different work. What goes for them goes for all of us because the Spirit has every intention of using us just as much as He uses them.

Perhaps you’ve lost your job recently. Perhaps you recently were told that the ministry you were doing at your local parish was being cut from the church’s budget. Perhaps you were enjoying a season where everybody and their brother seemed to admire and respect you, and now, they ignore you like the plague, don’t bother with you anymore, and you can’t understand what has happened.

Perhaps things were going great for you on your job, and now, things are starting to get really unpleasant. Sometimes (not all of the time, but sometimes) God allows this unpleasantness to take place because He knows that if He doesn’t, you’ll stay at that job forever and not move on to that “something greater” that He has in store for you.

Brothers and sisters, let us listen to what the Spirit is saying to us through the lives of Joseph and Moses, for what goes for them goes for us.

We experience “seasons of loss/seasons of greater gains” every day in our ordinary lives, and think nothing of it. For example, we take a single seed. We let go of it in order to plant it. This is our “season of loss.” For a while, we cannot see what we have let go of. In the end, however, a beautiful plant or tree springs up in its place – something much bigger and better than the one single seed which we originally “lost.”

We take a few dollars. We let go of them in order to invest them. This is our “season of loss.” For a while, we see nothing but the empty hand before us. Then, one day, our investment brings back to us a greater return than that which we originally invested.

This pattern/process of loss-to-greater-gains is something that we tend to apply to our normal everyday lives, but not to our spiritual lives. We apply this principle to earthly things, but not to heavenly things.

If you find yourself presently enduring a seeming season of loss in your life, get ready! God is preparing to move you to greater gains in Him. He’s taking you to the next level. He’s calling you to a higher realm! You haven’t been “demoted;” you are in the process of being “promoted,” and that by God!

Anytime God takes something away from us, it’s because He has something better for us in mind – something bigger and better than anything we had hoped for, considered, or even dared to imagine. But if we insist on clinging to our comfort zone, we may never discover what greater things lie in store for us.

Don’t be discouraged, dear friend. Seasons of seeming loss are preludes to seasons of greater gains.

Rejoice in the season in which you presently find yourself, for God has better things in store for you!