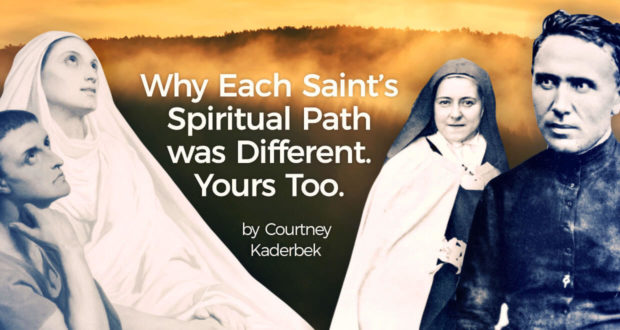 Why Each Saint’s Spiritual Path is Different, and Yours is Too

There are so many diverse paths to sanctity! Yet sometimes, instead of finding our own spiritual path, we are pulled from one holy devotion or cause to the next.

It seems that no matter what I do or where I go, I am busy comparing myself to others, to the point of comparing my spiritual life to that of fellow Catholics, and even condemning myself for failing to “match” another soul’s holiness—as if sanctity were a contest.

Take Catholic devotions, for example. If I find myself failing to wholeheartedly embrace a devotion practiced by many zealous Catholics, I feel that there must be something wrong with my spiritual life.

But that is not necessarily the case.

There are so many diverse paths to sanctity! Yet sometimes, instead of finding our own path, we are pulled from one holy devotion or cause to the next. After all, it seems foolish not to participate in something so sacred and worthy of our devotion.

But the truth is that there are thousands of holy devotions and causes, and it is impossible to be zealous about them all.

For our spiritual sanity, we need to realize that God is not calling us down multiple spiritual paths—just one. Instead of wasting time flitting nervously from devotion to devotion, let us commit ourselves to discovering our true spiritual path. By doing this, we will most assuredly reach our goal of sanctity—in the manner that God wills.

And if we still find ourselves tempted to compare ourselves to our neighbor, we would do well to remember the Church Triumphant.

God led these holy men and women down totally different spiritual paths, but each became a saint because each trusted that God would lead him or her to the same end: unity with Him.

The saints did not waste time wondering if their path was as “holy” as their neighbor. They simply trusted that God would lead them, and He did.

Look at the lives of this diverse group of saints: St. Therese of Lisieux, St. Damien of Molokai, and St. Monica.

St. Therese was a Carmelite contemplative who longed to be a martyr and a missionary but instead remained in France her entire life, offering up her daily prayers and sacrifices as part of her “Little Way” to sainthood.

St. Damien of Molokai was a priest and missionary who used his admirable spiritual and physical strength to serve the lepers of Molokai.

St. Monica was a married woman and a caring mother who, for decades of her life, prayed unceasingly for her son Augustine’s conversion.

What would have happened if these saints insisted upon mirroring each other, even though their God-given situations in life were so different?

Is it possible that St. Therese could have saved more souls through missionary work than through her humble, hidden Little Way?

What would have happened to the poor lepers of Molokai if St. Damien had traded a life of missionary service for the life of a cloistered religious?

And if St. Monica had denied her vocation to the married state, would she have ever given birth to and eventually helped convert the great Doctor of the Church, St. Augustine?

God is teaching us an important lesson through His canonized saints.

Saints can be married or unmarried, learned or unlearned, missionaries or homebodies, rich or poor, lovers of Divine Mercy or instruments of Divine justice.

They can be found soaring high on the wings of supernatural joy, as well as journeying deep into a world of shadow and sin to snatch souls from Satan’s grasp.

We are the blood of the Mystical Body of Christ, traveling through different parts of His mystical Body while still remaining united.

We must take different spiritual paths, because there are different trials on different paths, and God alone knows who He has equipped to meet them. For one soul, a certain trial would result in greater holiness. But for another, it would result in a panic attack and a rapid retreat—or a wild flight off the path altogether.

Let God mold you into the saint He has in mind. Do not spurn the path He has laid out for you by stubbornly journeying down another soul’s spiritual path. Instead, do your best to use it as a guide-way to fly most effortlessly to His Sacred Heart.

If God reveals Himself to you through His creation, then praise Him for His beauty and see Christ’s blood spilt in every flaming sunset and scarlet rose.

If He is present when you read the Scriptures, then do not miss an opportunity to seek out the Word of God in His written Word.

If you struggle with anxiety, then seek out His reassurance like a little child, and fight to cultivate a spirit of joy and confidence in the Lord.

God gave you every interest, desire, and personality trait you possess, and if used correctly, everything can be used to lead you to Him. It is your own personalized road to sanctity.

Admittedly, sometimes we must participate in a devotion or spiritual practice that comes unnaturally to us. However, if God is asking for this sacrifice, we grow in holiness as a result of our struggle. Despite our weakness, and even our reluctance, our sacrifice will be sanctified, because it will be an authentic challenge from God, and not a confused impulse from our soul.

Sometimes His invitation might come from outside forces, such as the Church, and other times it might come from the quiet voice of the Spirit within us. But do not worry; God will let us know when He is asking for this kind of special sacrifice.

In the meantime, let us dedicate ourselves to discovering the spiritual path that will lead us—as distinct and unique souls—the closest to Our Lord.

Courtney Kaderbek is a graduate of Seton Home Study School. She holds a degree in Telecommunication and Film from the University of Alabama and works as a freelance writer and videographer. When she is not training for an upcoming Irish dance competition, she happily succumbs to her God-given passion: writing stories that reflect the epic beauty of God’s creation.
augistine courtney courtney-kaderbeck damien kaderbeck life molokai monica saint spiritual spirituality therese 2015-04-27
Contributing Writers