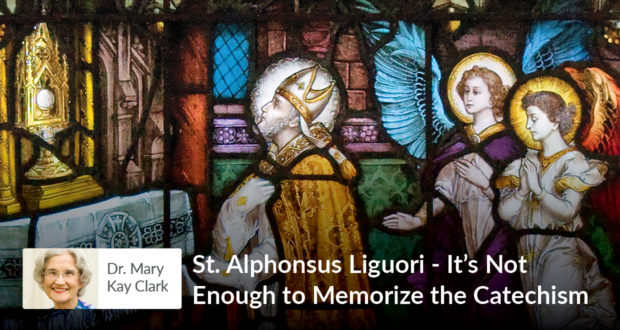 St. Alphonsus Liguori – It’s Not Enough to Memorize the Catechism

Dr. Mary Kay Clark reminds us that St. Alphonsus Liguori taught that our ultimate goal is not just learning facts but how to live our lives as Catholics.

August 1st is the feast day of St. Alphonsus Liguori.

St. Alphonsus has a special place in my heart and in my daily prayers. When I was about 12, I accompanied my mother on a trip to Rome.

While we prayed to all the saints, whose statues we saw and whose churches were named after them, a special saint was and has continued to be St. Alphonsus Liguori.

Alphonsus was born of a noble Italian family, whose parents were serious about practicing their faith with daily Mass and prayers. When his father went on spiritual retreats, he took Alphonsus with him.

Alphonsus was the oldest of seven children and helped his brothers and sisters in the prayers and practices of the Catholic Faith. The parents of Alphonsus hired tutors to teach their children at home.

It is recorded that the parents, especially their father, was daily involved and present during the children’s home schooling. The close attention his father gave to the proper education of Alphonsus resulted in his learning quickly and developing memory and thinking skills well beyond his age.

He advanced so quickly that he graduated from high school before his teen years. Amazingly, he studied university courses at fourteen and, at 16, earned a law degree.

Alphonsus loved his studies and dedicated almost full time to them. It is believed, as a teenager, he was more than a little proud of his academic achievements and aware of the local attorneys, who expressed amazement at his insightful perceptions.

Prominent citizens noted his successful record in the law courts, where for eight years, he never lost one of his court cases. He became popular among the wealthy, educated, and prominent citizens and found time to attend the social affairs of the leaders of the community.

Though he lived a comfortable upper-class life, he was a faithful practicing Catholic. Then, suddenly, he lost a court case.

He was disturbed and upset this could have happened to him. He had such a high opinion of himself that he could not accept losing a court case.

In his daily prayers at Mass, he reflected on his life, especially his spiritual life. He came to realize what he had become, a lawyer filled with pride because of his gifts of intellect.

He turned to God, who helped him see himself as proud of his abilities but not giving proper recognition to God for his intellectual gifts, nor using them for the Church.

Alphonsus came to realize his focus on himself and his personal success was not pleasing to God. He came to realize, with the help of the Holy Spirit, he needed to change his life.

He talked to his parents, especially to his father, to help him. He gave up his successful law practice to become a priest.

Alphonsus Liguori studied for the priesthood and became a priest and eventually a bishop. He used his unique intellectual talents not only to draw closer to Jesus, but to write about the lives of Jesus and Mary to help others learn about the Faith.

His writings are inspired, as can be recognized in his spiritual meditations. His most well-read book is a spiritual classic: The Glories of Mary.

August is a good month to reflect on our home schooling, to be re-inspired by favorite saints, asking them in prayer to help our children learn their lessons, especially their religion lessons.

St. Alphonsus should remind us parents, and we need to remind our children, that our ultimate goal is not learning just facts but how to live our lives as Catholics.

It is not enough to memorize the catechism, as St. Alphonsus teaches us. We must live the Catholic life of prayer, attending daily Mass if possible, receiving the sacraments, and saying the Rosary, a favorite practice of St. Alphonsus.

The following is a prayer by St. Alphonsus:

Eternal Father, your Son has promised that whatever we ask in His Name will be given to us. In His Name I pray, give me a burning faith, a joyful hope, a holy love for Jesus Christ. Give me the grace of perseverance in doing Your Will in all things. Do with me what You will. I repent of having offended You. Grant, O Lord, that I may love you always and never let me be separated from You. O my God and my All, make me a saint. Amen.