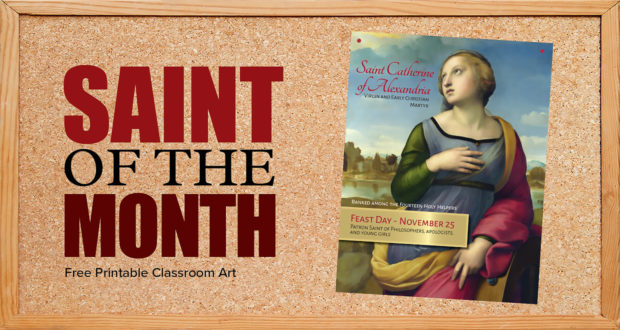 Catherine converted many learned pagans, soldiers, even members of the royal household to Christianity. In anger, Empire Maxentius had them all executed.

St. Catherine of Alexandria was born in Alexandria, Egypt around 287. Legend has it that she was of noble birth, possibly even a princess. As such, she was educated and became an avid scholar. She converted to Christianity when she was 14 years old, and dedicated herself to God. When she heard that the emperor, Maxentius, was persecuting Christians, she went to confront him.

Maxentius summoned 50 scholars and philosophers to debate with her about her Faith. St. Catherine, filled with the Holy Spirit, spoke so eloquently in defense of her Faith that she converted most of the pagans to Christianity. Unfortunately, Maxentius had them executed. The emperor then had Catherine tortured and imprisoned, but she still did not give up her Faith.

As a final attempt, Maxentius offered her marriage if she but abandon her Faith. St. Catherine refused saying that she was married to Jesus Christ and that her virginity was dedicated to Him. Angrily, the emperor ordered her to be executed by the breaking wheel. However, when Catherine touched the wheel it shattered. This is why she is sometimes called St. Catherine of the Wheel, and is normally depicted with a spiked wheel. She was martyred shortly after.

St. Catherine was a very popular saint during the medieval period, and is ranked among the 14 Holy Helpers. She was also identified by St. Joan of Arc as one of her three visitors who helped and gave Joan counsel. St. Catherine is the patron saint of philosophers, apologists, and young girls. Her feast day is on November 25.

St. Catherine of Alexandria, pray for us.

Download the free printable monthly saint page using the button below. You can pin it to your classroom wall or place it on your refrigerator to help your children learn more about St. Catherine of Alexandria.