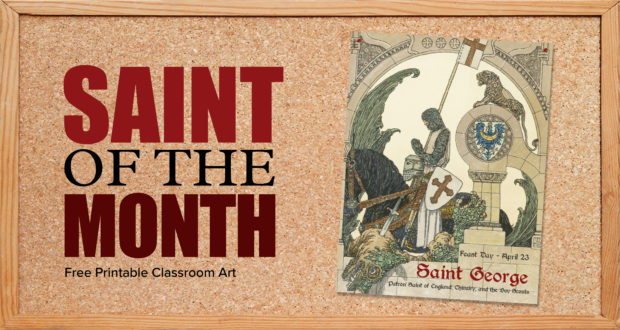 St. George – Saint of England, Chivalry, and the Boy Scouts

The example of St. George teaches us to have faith that God will give us the courage, strength, and fortitude needed to fight the dragons in our lives.

There are many legends and stories about the heroic Saint George. The historical accuracies of these stories, however, are questionable.

Pope Gelasius considered St. George to be one of those saints “whose names are justly reverenced among men, but whose actions are known only to God.” What we do know is that George was a Roman soldier who died for his Faith.

It is believed that George was born to a Christian noble family. When he was old enough, George joined the Roman army under Emperor Diocletian.

Around 303 AD., Diocletian, who hated the Christians, ordered the removal of all Christian soldiers from his army, and that every soldier should offer sacrifices to the Roman gods as proof of their allegiance. George refused. Instead, he publicly announced his beliefs.

Diocletian tried to convert George by offering him land, money, and standing if he but offer sacrifices to the Roman gods, but George refused to give up his Christian faith. Frustrated, the emperor had him tortured, and when that did not force him to convert, ordered George to be executed.

Through all of this, George never renounced his Faith. George was beheaded and is believed buried in Lydda.

So What About the Dragon?

There are many stories about the deeds of Saint George, but the most popular is the Golden Legend.

The Legend has George passing through a city in the Libya province when he heard of their peculiar predicament. The city was near a marshy swamp inhabited by a ferocious dragon. To appease it, the people were feeding it sheep every day, but when the sheep became scarce, they turned to human victims.

Victims were selected by drawing lots. It just so happened that when St. George was passing by, the lot for the king’s daughter was drawn and she was sent to the dragon.

After making the sign of the Cross, George slew the dragon. The whole town abandoned their pagan beliefs and converted to Christianity. As thanks, the king tried to give George riches and treasures, but George told him to give it to the poor instead.

Despite the story’s historical accuracy, it teaches us a valuable lesson on courage and faith. We must have faith that God will give us the courage, strength, and fortitude needed to fight the dragons in our lives.

Many might wonder how St. George became the Patron of England. He became popular in the middle ages, probably from returning Crusaders who brought back stories of St. George. Many of his legends are about valor, courage, and chivalry; virtues to which many knights strove.

St. George’s feast day is April 23. Besides England, George is the patron saint of chivalry, and the Boy Scouts. He is also one of the Fourteen Holy Helpers.

St. George, heroic Catholic soldier and defender of your Faith, you dared to criticize a tyrannical Emperor and were subjected to horrible torture. You could have occupied a high military position but you preferred to die for your Lord. Obtain for us the great grace of heroic Christian courage that should mark soldiers of Christ.
Amen.

Download the free printable monthly saint page using the button below. You can pin it to your classroom wall or place it on your refrigerator to help your children learn more about Saint George.