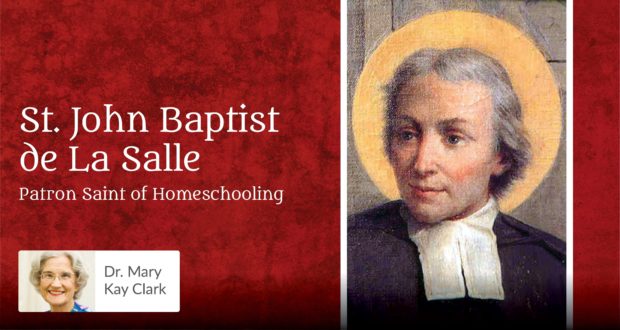 St. John Baptist de La Salle is a timeless inspiration for homeschooling parents who want to teach their children according to their children’s ability, all the while encouraging them to learn about and to practice their Catholic Faith.

John Baptist de La Salle was born in 1651 into a wealthy Catholic family. His deep devotion to God and to the teachings of the True Faith was exhibited through his daily attendance at Mass, his service as an altar boy, and his desire at a young age to become a priest.

John was educated by private tutors at home, went on to higher education, and became a priest in his twenties. When his parents died, Father John helped in the education of his six younger brothers and sisters.

As he visited parishes around France, Father John’s heart was moved by the poverty-stricken children roaming the streets and begging for food. So commonplace was the poverty of these poor children that their poverty was an accepted fact of life at that time. Few people, even among the priests and bishops, were willing to help these children rise above their crushing poverty.

Father John was determined to help alleviate the suffering of the poor. He realized that a root cause of their poverty was the lack of proper education and training in some occupation. At that time in France, learning, even basic learning, like reading, writing, and math, was considered a privilege only for the wealthy.

While wealthy French families hired tutors for their children, poor children commonly received no education at all. To make matters worse, most classes were taught not in the native French language, but in Latin. In order to have any chance at understanding the lessons, children were required to have a mastery of Latin. The educational system was, quite literally, starving the nation.

Father John Baptist de La Salle became determined to provide an education for children of the poor – not just a general education, but a Catholic education. To help boys and young men to learn not only reading and writing, but also occupational skills, Father, with his own money, hired laymen as teachers who taught in the local French language and dialects.

These laymen lived together like brothers, dedicated to teaching the poor. They prayed together, shared teaching ideas, and taught boys, primarily to help them find local paying jobs, rise out of poverty, and live as practicing Catholics. Eventually, Father John established the organization known today as the Brothers of the Christian Schools.

Father John was persecuted, even taken to court, by people who didn’t want to see their education monopoly challenged. Sadly, his teaching Order was faced with legal and economic challenges for decades. Eventually, Father John gave away entire his entire inheritance from his parents for the cause of teaching the poor.

There is no doubt that he changed the lives of thousands of boys in his lifetime, and after his death, with the Brotherhood he established, changed the lives of millions of children not only in France but throughout the world. After his death, Father John Baptist de La Salle received the distinction of being proclaimed the saint who is a “special patron of all teachers of children and youth.”

Though Father John was of a different time and place, he is an inspiration for homeschooling parents who want to teach their children according to their children’s ability, all the while encouraging them to learn about and to practice their Catholic Faith. Catholic homeschooling parents might be encouraged by the words of Pope John Paul II, who praised Father John Baptist de La Salle nearly three hundred years after his death:

“His charism, fostered by assiduous contemplation of God, the Creator and Savior, and lived in accordance with the religious ideal of a life consecrated to the Lord in fraternal and community life, shows that educating, teaching, and evangelizing form a whole. Education remains incomplete if it does not lead to an apprenticeship of respect for life and freedom, of service to the truth, and of the desire to give of oneself.”