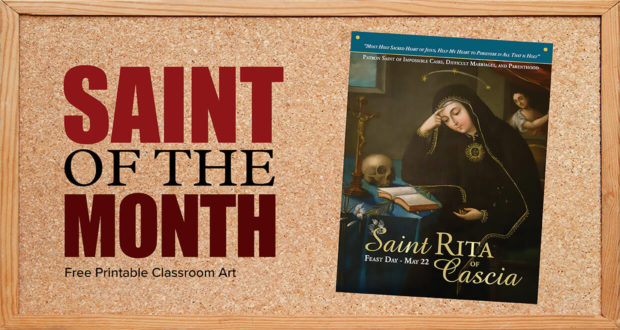 St. Rita of Cascia – Saint of the Impossible

Saint Rita of Cascia, born Margherita Lotti, was an Augustinian nun known as a peacemaker and patron saint of impossible cases, abused women, and parents.

The life of Saint Rita of Cascia is a perfect example of what can happen when you trust in God even when things seem impossible.

Saint Rita of Cascia was born in a village called Roccaporena, near Cascia, Italy in 1381. She was the only child of Antonio and Amata Lotti, who were known as peacemakers in their community. They considered Rita’s birth as a gift from God as they were already advanced in years by the time she was born.

From an early age, Rita longed to become a nun and she would frequently visit the convent of the Augustinian nuns in Cascia. However, thinking of her safety and security, her parents promised her in marriage to a man named Paolo Mancini. In obedience to her parents, Rita married him and during their 18 years of marriage, she bore and raised him two sons.

The Peacemaker of Cascia

Paolo turned out to be a cruel man with a violent temper and many enemies. He would verbally and physically abuse his wife, had infidelities, and was involved with a family feud between the Chiqui and Mancini families.

Eventually, through Rita’s influence of humility, kindness, and patience, Paolo changed his ways and became a better person. He begged Rita for forgiveness and became more amiable. The family feud, however, was becoming more violent and Paolo, betrayed by one of his allies, was killed.

Rita, after publicly pardoning her husband’s murderers, tried in vain to disuade her twin sons from taking revenge. Instead they joined their uncle in the feud, but before they could execute their plans, they became deathly ill. They shortly died, but not before asking God for forgiveness.

Throughout it all and despite losing her husband and sons, Rita continued to have faith and fully trust in God’s providence. She again felt the calling to religious life and tried to enter the Augustinian convent in Cascia. She was refused, but she was persistent and asked for entry again.

The convent was afraid that the harmony of the community would be ruined if Rita joined since members of the rival family who murdered her husband were members of the convent. It was agreed, though, that she could enter the community if she would peacefully reconcile the feuding families. Through the intercessions of Sts. Augustine of Hippo, Nicholas of Tolentine, and John the Baptist, Rita was able to bring the families together and she joined the convent at age thirty-six.

Gifts of Thorn and Rose

For the next forty years, Rita followed the Rule of St. Augustine by immersing herself in prayer and works of charity. She also continued to advocate for peace throughout Cascia. One day, while meditating on Christ’s Passion, she asked, “Please let me suffer like you, Divine Savior.”

Suddenly a deep wound as if from a thorn pierced her forehead. It never healed and caused her much pain for the rest of her life, but she offered it up for the well-being of others.

Toward the end of her life, Rita became bedridden. When she was asked by a relative if she wanted anything, Rita requested that she be brought a rose from her old family garden. While thinking this would be impossible since it was January, the relative went to the garden and there, as Rita predicted, found a single rose. She took it back to the convent and handed it to Rita, who gave thanks and praise to God.

St. Rita of Cascia died peacefully on May 22, 1457, which is her feast day. Her body is incorrupt and can be found in the Saint Rita Shrine in Cascia. St. Rita is the patroness of impossible cases, difficult marriages, and parenthood.

Saint Rita of Cascia, pray for us.

O powerful St. Rita, rightly called Saint of the Impossible, I come to you with confidence in my great need. You know well my trials, for you yourself were many times burdened in this life. Come to my help, speak for me, pray for me, intercede on my behalf before the Father. I know that God has a most generous heart and that He is a most loving Father. Join your prayers to mine and obtain for me the grace I desire (here mention your request). You who were so very pleasing to God on earth and are so much so now in heaven, I promise to use this favor, when granted, to better my life, to proclaim God’s mercy, and to make you more widely known and loved. Amen.

Download the free printable monthly saint page using the button below. You can pin it to your classroom wall or place it on your refrigerator to help your children learn more about Saint Rita.