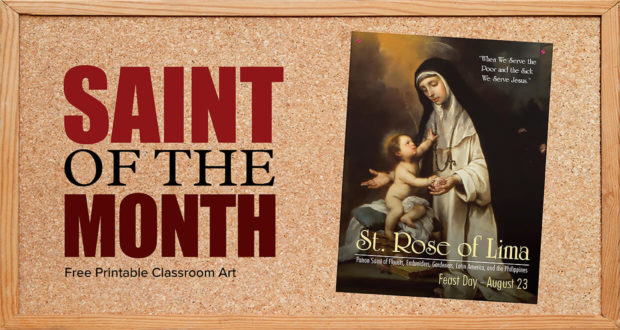 St. Rose of Lima – Patron of Latin America and the Philippines

Rose was devoted to homeless children, the elderly, and the sick. She fed and cared for them in her home, saying, “When we serve the poor and the sick, we serve Jesus.”

Saint Rose of Lima, the first canonized saint born in the Americas, is known today for her chastity, care for the sick and the poor, and for her practice of extreme penance.

Isabel Flores de Olivia was born in Lima, Peru, in 1586 to a Spaniard father and an Indian mother. Because of her beauty she was nicknamed “Rose” – a name she took at her confirmation.

Even as a child, Rose knew she wanted to be a nun, and she would often fast and pray in secret. She would go to Mass and adoration daily. Rose looked up to St. Catherine of Siena, and took her as her model.

As Rose grew older, her beauty attracted many suitors. To prevent any temptations for others and to fight against her own vanity, Rose cut her hair short and rubbed pepper on her face which caused it to blister.

Wanting her to be married, her parents refused to let her enter a convent. Eventually, they compromised by letting her join the Third Order of St. Dominic and giving her a room to herself in the house.

Except for when she went to daily Mass and adoration, Rose cloistered herself in her room where she led a life of extreme prayer, fasting, and penance. Eating and sleeping was reduced to the bare minimum to give more time to prayer. She also began to wear a heavy silver crown with spikes on the inside that pierced her flesh. It was meant to remind her of the Crown of Thorns.

When her family fell into financial trouble, Rose helped out by selling the flowers she cultivated in the garden, and sewing embroidery in the evening. She was also devoted to the sick and hungry of her community. She built a sort of infirmary in the house where she cared for homeless children, the elderly, and the sick. She said,

“When we serve the poor and the sick, we serve Jesus.”

Due to her severe fasting and penance, Rose developed many health problems, however, she bore it all without complaint. She died on August 25, 1617, at the age of 31.

Because she was so deeply venerated by the people of Lima, her funeral was a major event. Everyone, including the city’s authorities, attended. She was laid to rest in the Dominican convent in Lima. Her body was transferred to the church of San Domingo in Lima after her canonization.

Saint Rose of Lima is the patron saint of florists, embroiders, gardeners, Latin America, and the Philippines. Her feast day is August 23.

St. Rose of Lima, pray for us.

Prayer to Saint Rose of Lima

Glorious Saint Rose of Lima, you knew what it was to love Jesus with a fine and generous heart. Since infancy, you despised the world’s vanities in order to embrace His Cross.

You loved with unfailing devotion our Heavenly Mother and professed a great tender dedication to the destitute, serving them the same way Jesus did.

Dear God our Father, teach us to imitate Saint Rose of Lima’s greatest virtues, so that we, following her example, may enjoy her glorious protection in Heaven. We ask this through our Lord Jesus Christ, who live and reigns forever. Amen.

Download the free printable monthly saint page using the button below. You can pin it to your classroom wall or place it on your refrigerator to help your children learn more about Saint Rose of Lima.