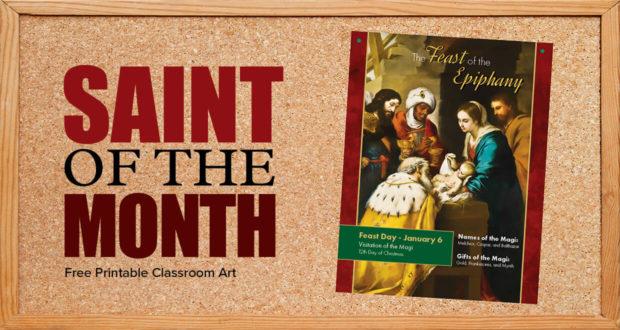 The Why and How for Celebrating the Feast of the Epiphany

Among the many customs and traditions to celebrate the Feast of the Epiphany are finding the hidden bean in King’s bread and receiving gifts from La Befana.

The Feast of the Epiphany of Our Lord is one of the oldest Christian feasts. Its feast day is on January 6th which is the 12th Day of Christmas, and marks the end of Christmastide.

The Visitation of the Magi

“Where is the one who has been born king of the Jews? We saw his star in the east and have come to worship him.”

The story of the Three Wise Men can be found in the Book of Matthew.

One night the Magi, Melchior, Caspar, and Balthazar, found an unusual star in the night sky. They knew it told the birth of a new King and wanted to go and pay homage to the new-born King.

They followed the star to Jerusalem where King Herod directed them to Bethlehem because of a prophecy: “But you, Bethlehem, in the land of Judah, are by no means least among the rulers of Judah; for out of you will come a ruler who will be the shepherd of my people Israel.” When he sent them off, Herod told them to return and tell him where to find the child-King so he could go and pay homage as well.

The Wise Men continued to follow the star till they found the Jesus. There they knelt and worshipped Him. They gave Him three gifts of gold, frankincense, and myrrh. When they were heading back home, they were warned in a dream not to return to Herod, and found another route.

The Revelation of Christ

Originally, this was only one of three events that were celebrated and honored during the Feast of the Epiphany. The other two events were the Baptism of Our Lord in the Jordan and the Wedding at Cana. This was because each event revealed Christ’s divinity to man, which is what the Epiphany is all about.

During the Baptism of Our Lord, God the Father said, “This is my Son, whom I love; with Him, I am well pleased.” At the wedding at Cana, Jesus turned water into wine showing His divinity.

Today, the Baptism of Our Lord is celebrated the Sunday after the Epiphany, and the wedding at Cana is honored after that.

There are many different customs and traditions to celebrating the Feast of the Epiphany. Some families will wait until January 6th to exchange gifts instead of on December 25th. Others, bake an “Epiphany Cake” or a Kings Bread. It’s a batch of pastries in which one has a black bean hidden inside. Whoever finds the bean is the king or queen of the day.

Another tradition is the leaving of shoes. Children place their shoes out by the door, and the Wise Men will leave gifts in their shoes. Sometimes they will leave grass and water out for the wise men’s camels as well. Other children will dress up as wise men for the Epiphany.

Another tradition is La Befana. Legend has it that she missed her opportunity to bring a gift to Jesus together with the Wise Men, so she now brings gifts to other children at night.

O God Who by a star guided the wise men to the worship of Your Son we pray You to lead to Yourself the wise and great of every land that unto You every knee may bow, and every thought be brought into captivity. Through Jesus Christ our Lord. Amen.

Download the free printable monthly saint page using the button below. You can pin it to your classroom wall or place it on your refrigerator to help your children learn more about the Feast of the Epiphany.