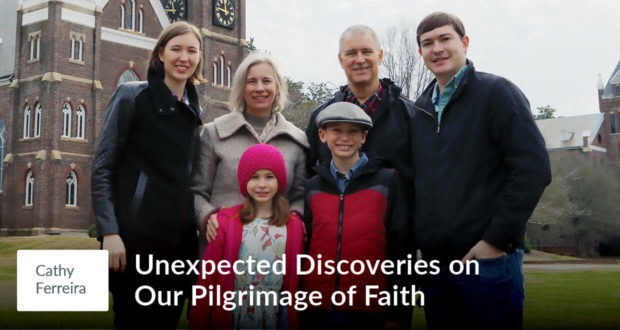 Unexpected Discoveries on Our Pilgrimage of Faith

In their pilgrimage of Faith, the Ferreira’s are thankful for the benefits of a flexible homeschooling schedule and the grace that came in surprising ways.

Seton homeschooling has blessed and challenged our family in countless ways.

Our children, Tiffany (27), Kurt (25), Damien (11), and Siena (9) have benefited spiritually, academically and also in the extra activities our homeschooling schedule has allowed.

We began homeschooling in 2002 when Kurt and Tiffany were in fourth and sixth grade. Our search for a Catholic curriculum with flexibility began with prayer, and we were blessed to find Seton Home Study School. We wanted a Catholic education that would promote higher education.

Upon learning of Seton and the incredible lesson plans offered, our choice was clear. With the benefits of a flexible schedule for daily Mass, meeting family needs and vacationing (my husband Mark’s job did not allow for time off in the summer), and the valuable support of Seton’s staff, this education plan fit our family well. And, as God wills, we received added blessings we had not anticipated. 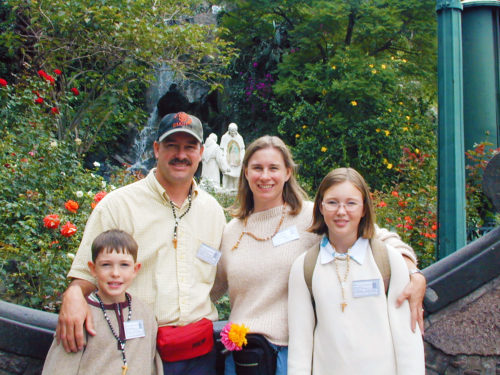 Our prayers had led us on a pilgrimage to Mexico City for the canonization of Juan Diego in 2002. This experience deeply impressed our family’s faith. Not long after, in the fall of 2003, my mom was diagnosed with a viral brain infection.

Since we did not know how her illness would progress, we decided to pack the school books, music instruments, and office needs and drive the ten hours to be with her to help. Mark had to return to work, but I stayed with Tiffany and Kurt to help for a month. Because of Seton’s flexibility, we were able to keep up the children’s school work.

This was not the only occasion that homeschooling’s flexible schedule has provided the opportunity to help the sick. In our parish, our family ministry is with the sick and dying. A dedicated sister, Sister Christina, from the Sacred Hearts of Jesus and Mary, has trained me to visit and minister to the people and the children have made cord rosaries, played music and sang with friends at Christmas time. 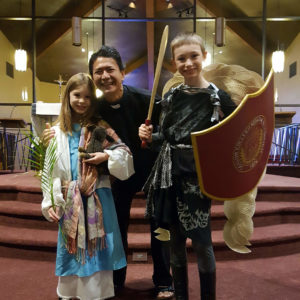 Since we have been homeschooling, we have met other local homeschooling families and have enjoyed learning and sharing with them. I had several female health issues, and we were medically advised that more children were not an option.

When I expressed this to another Mom, who was a nurse, NFP instructor and homeschooler, at a local Walk for Life, she and three other homeschooling Moms started praying, and we were soon expecting our third child, Damien, after fourteen years. In His goodness, God blessed us again with Siena in 2008.

So began the second chapter of our second Seton experience with Damien enrolling in 2011 and Siena in 2013. About this time, our older children’s college years progressed with Tiffany graduating in 2012 and Kurt in 2015.

In the fall of 2012, Mark was diagnosed with a high grade cancer and we began another journey. That day, I told Mark, “We are both dying, the only difference is you know what you have. See yourself well, and we will live each day to the fullest with the grace of God.” Once again, we packed our school books and traveled, this time to the major research medical centers. 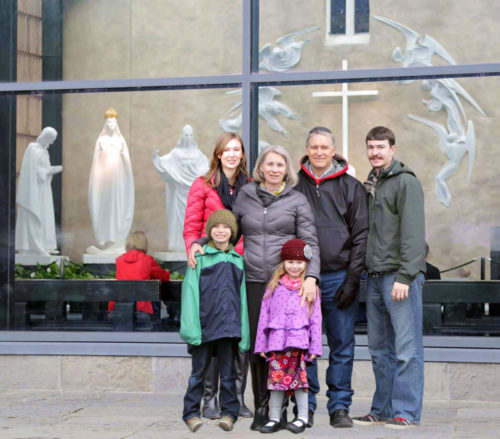 We were told his cancer was rare and there is no precedence for treatment. The only thing the doctors agreed on was this cancer had to be in his bones. It was not. We told every doctor that we believed in the Great Physician and while we greatly appreciated them and their staffs and would pray in thanksgiving for them, we would follow His will.

Until 2015, Mark’s treatment went well and he was able to work. In March 2016, he had a thirteen day hospital stay, acute renal failure, surgeries, and a heart attack in the middle of forty radiation treatments. His cancer had spread significantly. 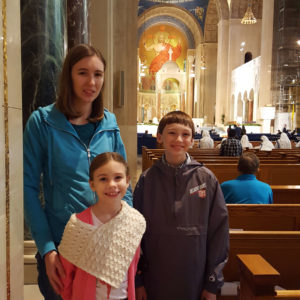 During his radiation treatments, we heard on Catholic radio about a pilgrimage to the Twenty-One California Missions. We felt it would be a good experience for Damien and Siena. We sent photos home to Mark every day and prayed for his healing at every Mission. Once again, our faith was deepened on our pilgrimage.

As we traveled on the bus to the missions, we watched an EWTN miniseries about St. Junipero Serra. The film’s director James Kelty was with our group, and after one of our dinners, had a Questions and Answers session. After the Q&A, we spoke with Mr. Kelty, who asked if we would consider Damien being in his next film project about Fr. Vincent Robert Capodanno. Mr. Kelty explained that Damien had a strong resemblance to Fr. Capodanno as a boy.

Shortly after the pilgrimage, we realized Mark could not return to work. We decided it was time to discern our retirement plans of moving to North Carolina. Spending a week in North Carolina for Christmas we found a home and medical care. It was evident God was confirming our decision as His will. In January, we learned the cancer had spread to the Mark’s bones. 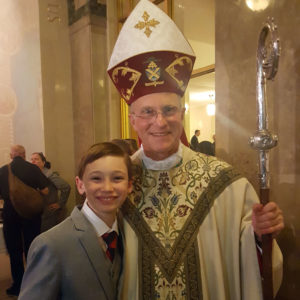 In March, Damien played the part of the young Fr. Capodanno in the docudrama Called and Chosen. This spring we moved from California to North Carolina, and in July, Kurt and his girlfriend Lindsey were married. In September, we were honored to attend a Mass in Washington, D.C. for the 50th Anniversary of Fr. Capodanno’s death. 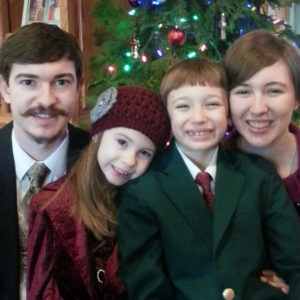 On our drive home, we were blessed to visit Seton Home Study in Front Royal, Virginia. It was wonderful meeting so many there who have supported us academically and prayerfully throughout the years! We are thankful! With the love of Christ and the grace of God…all is well.

This scripture verse has been a particular source of strength for us over the years.

“Everything indeed is for you, so that the grace bestowed in abundance on more and more people may cause the thanksgiving to overflow for the glory of God. Therefore, we are not discouraged; rather, although our outer self is wasting away, our inner self is being renewed day by day. For this momentary light affliction is producing for us an eternal weight of glory beyond all comparison, as we look not to what is seen but to what is unseen; for what is seen is transitory, but what is unseen is eternal.”