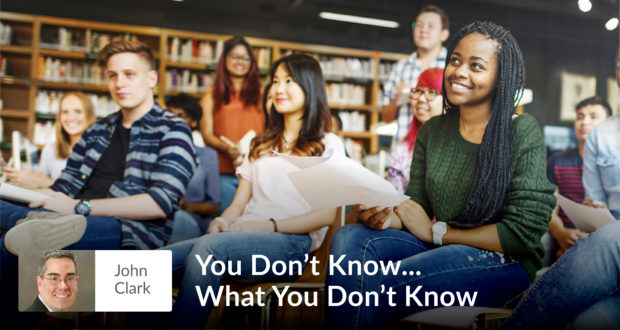 A return to his college theology class, twenty-five years later, taught John Clark that homeschooling is not about simply placing books in front of our children, but in systematically teaching our sons and daughters about God and about how much God loves them.

Last year, in the omelet line at a parent function at Christendom College, I casually mentioned to school president Dr. Timothy O’Donnell that I regretted not taking his Ascetical and Mystical Theology class when I was a student.

Though I took seven theology courses at Christendom, I felt that this particular class would have helped me in my professional writing. Kindly, Dr. O’Donnell offered to let me sit in on that course the next semester. Though I’m sure he meant it sincerely, I doubt he thought I’d actually take him up on the offer; but when he walked into his class in January, there I was in the back of the room—ready to learn.

When you haven’t been in school for twenty-five years, many things are different: some you expect, some you don’t. I knew I would feel a little awkward in class, insofar as I was the only student with gray hair, bifocals, and wrinkles.

Something I did not expect was the difference in how long the class seemed to last. When I was a freshman, I’d often gaze at the clock on the wall and watch the second-hand sluggishly circumnavigate each minute. But now, each seventy-five minute class seemed so short—I didn’t want the class to end.

Frankly, I was shocked by how much I learned every class. I had spent the quarter-century since graduation extensively reading the Catechism, encyclicals, Scripture, the Summa, and the writings of the church fathers and saints; so when I sat down that first day in class, I figured I would already know most of what Dr. O’Donnell was about to teach. I was wrong.

For seventy-minutes twice a week, I made careful reference of all the things Dr. O’Donnell taught that I did not know—which is to say that I frantically took notes, pouring ink on page after page after page. After each class, I encountered an irrepressible thought that was simultaneously frightening and exhilarating: I don’t know anything.

I say frightening because I had previously written so much about theology without this knowledge, and exhilarating because this newly discovered knowledge would help me communicate truth, beauty, and the love of God to my readers.

It also became clear to me that without a guided tour of mystical theology, I would not know where to begin. Yes, I could read the writings of the saints and mystics, but without someone to guide my way, I would have only a pastiche, rather than a systematic knowledge of the subject.

In some way, that is the value of an organized program like Seton, which helps both learn and teach the path to knowledge. Sitting in class helped highlight that reality to me. Homeschooling is not about simply placing books in front of our children, but in systematically teaching our sons and daughters about God and about how much God loves them.

And I learned something else. For the past twenty-five years, I’ve been a teacher to my children, rather than a student. Being a student again showed me that the teacher who loves his subject is the best teacher. The subject of theology is God, and Dr. O’Donnell’s affection for God was evident in every single class.

As homeschool parents, we can get lost sometimes in academics; when our children are old and gray, however, it’s not the questions and answers their minds will remember, but their hearts will be enkindled with the memory of their parents’ love of God.

One last point. As I sat in the back of the classroom last semester and watched an old friend teach theology, I felt hopeful that—in an unfaithful world—there is a still a place that examines the beauty of God’s love for us.

Twenty-five years prior, I had experienced the joy of this wonderful environment, and this year’s class only confirmed my fondest memories. Twice a week, I was reminded that doctrine remains doctrine, good teaching remains good teaching, and Christendom remains Christendom.

It had been fifty semesters since I last attended class, but in some ways, it was as though I never left.